Stepping into the Archives: Bjorklünden 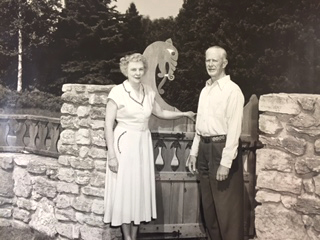 It was a Friday afternoon during reading period and I decided to spend it in the Lawrence University Archives. I met University Archivist and Assistant Professor Erin Dix. She is an alumna from the class of 2008 and has been working in archives for five years. She earned her Master’s in Library Studies at the University of Madison and started her first job at Lawrence. “The timing was perfect,” Dix said.

She is there to help students, faculty and staff find answers to their questions about Lawrence or Milwaukee-Downer College. The archives hold various categories of primary sources such as paper documents, letters, speeches, meeting minutes, diaries and journals.

There are also audio recordings and films. The archives has open hours every weekday afternoon, but material cannot be checked out. Dix says the main purpose of the archive is for “use, not just preservation.” Sometimes, she will work with classes on primary source material. Students can donate to make their mark in Lawrence history.

The archives date back to mid-1840s and continues to the present. I asked her what has changed about Lawrence since she graduated. When she graduated, there was no campus center. Students ate at Downer Commons, which does not exist anymore.

I inquired about Freshman Studies, a major part of Lawrence history. Freshman Studies started in 1945. There were a few years in the early 1970s where it changed a lot, but in 1945 Freshman Studies was the way it looks today. On the library’s website there is a list of works that have been studied by creators such as Mozart, Shakespeare, Plato and Galileo. Plato has been studied fifty times, and still holds as the most studied work.

I asked Dix if I could take a peek at one of the boxes. She took one out titled Winifred and Don Boynton, who were the original owners of Bjorklünden. They built the chapel based on Norwegian chapels and gave everything on that property that is now Bjorklünden to Lawrence. Winifred was an artist.

I saw some photos of her carvings that she made by hand. I saw some sketches that showed her thought processes and a letter from President D. Eisenhower from the White House. I saw some Christmas cards she made. I saw her personal inspirational notebook which she used to document things she found inspiring and what she thought about. I felt as though I was in the mind of Winifred Boynton herself.

My experience in the archives reminded me of Borge’s “Library of Babel.” It was a room with rows upon rows of infinite knowledge that is kept by a single “librarian.” The archives are a hidden treasure that you should definitely check out before you graduate.