Krista Tippett delivers Convocation on “The Mystery & Art of Living” 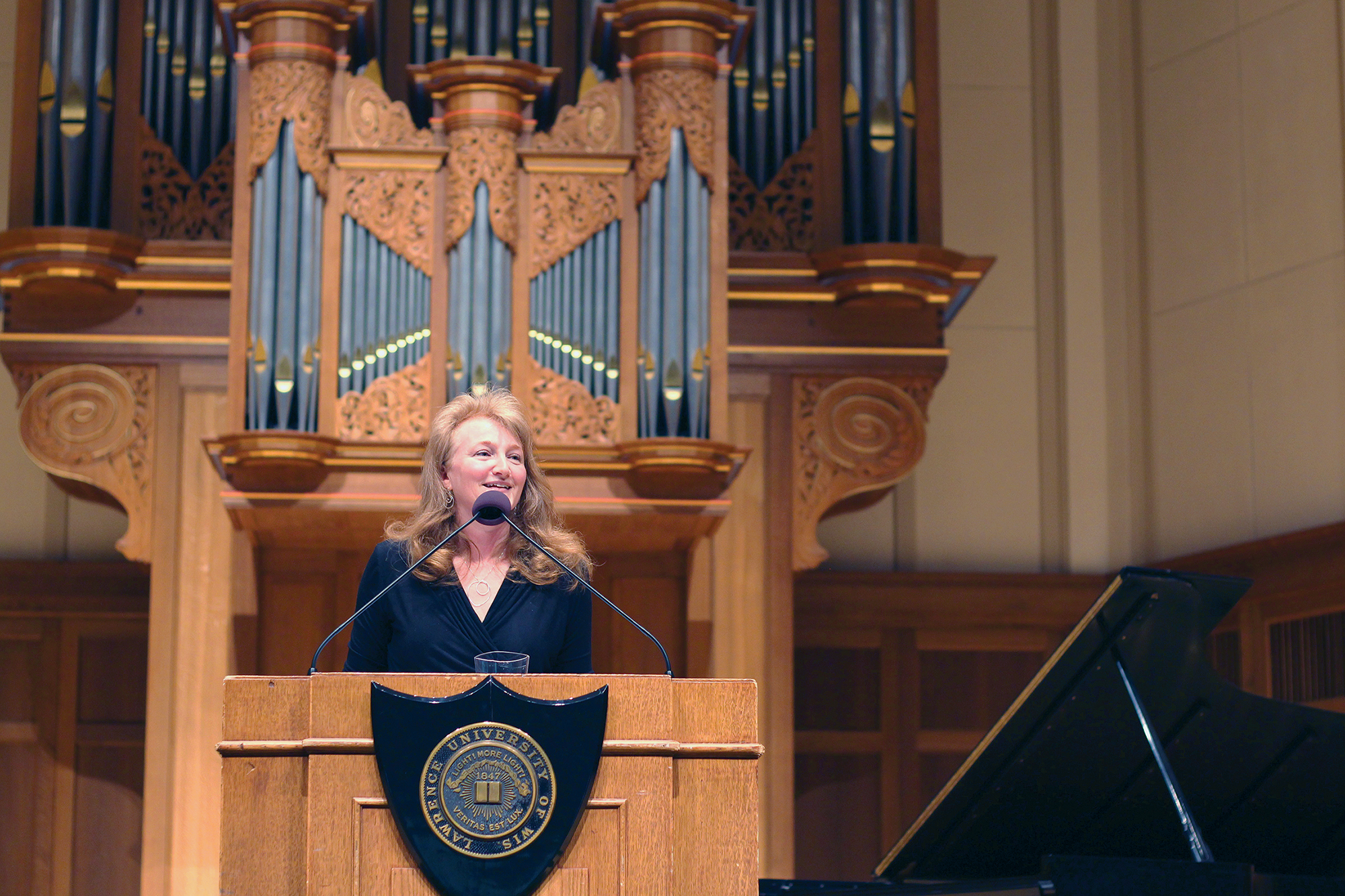 Tippett admitted that she is constantly asked about the defining qualities of the wisest people she has interviewed for her show and accredits it mostly to that phrase.

“Spiritual genius is not about lofty ideals, it is much more about flesh, blood, time, space,” continued Tippett.

Describing our culture as one of “fluid religious identity,” Tippett is excited that our institutions are being imploded by the pace of change—including religion.

“That sort of strident religiosity that was out front not only has receded, but I think now we have a generation coming into adulthood, your generation, where kids that may have been raised in religious families, many not, are allergic to that sort of strident religiosity, so are crafting their own religious lives,” said Tippett, “But what hasn’t happened—spiritual searching and spiritual life, ethical passion, moral imagination, personal growth, that hasn’t gone away.”

Despite this, Tippett recognizes the value that religion is rooted in.

“Core impulses and core questions of religious traditions will survive but in different forms. I don’t know what church will look like fifty years from now,” said Tippett, “Taking the principles of religion outside the institutions, we want to be of service; we want to be caring we want to create life of meaning and compassionate communities, which calls religion back to its highest ideals.”

She recognizes this as valuable due to what she considers are the negative effects of our “24/7 media environment where we are saturated all day with news.”

“It is important to point at the hopeful and generative aspects at this point in time because media and journalism is much better, more rigorous at examining and exposing at what is going wrong, extraordinarily terrible, than it is at what is going right,” said Tippett, “It almost doesn’t seem right or good to cover what is going right. It is always over simplified. It is almost always these saintly people who none of us could be like, it is the feel good side bar fluffy feature. So it is important to me when talking about goodness or spiritual evolution to point out that it is actually possible in the thick of our lives.”

As a result, Tippett asks us to consider taking steps to making our lives more positive, namely by “increasing gratitude, remembering the virtue of listening, paying more attention to the beauty and what we are doing when we feel most beautiful, and using ‘love’ more often in the public sphere.”

Tippett, almost paradoxically, also stresses the “importance of a failure awakening” since “failures are the very element of human existence and contribute to our wisdom.”

Through this, we will ideally be better equipped to participate positively in our daily lives.

“You know how you have to save the world, that’s pretty demoralizing. But there are pragmatisms in saying I can save myself, I can touch the world around me, I can make a difference that is concrete, in an interesting paradoxical way we have this globalized world which made the value of what is local more meaningful.”

However, Tippett reminds students to remember their ‘whole selves.’

“Some of the things that the activists of the sixties would tell you they got wrong was not nurturing their own resilience– kind of exhausting yourself in the pursuit of justice and ideals.  Also, a lot of our most noble public figures have private lives that don’t match that, so you’ve got this schizophrenia and you ultimately don’t get the world that you want,” concluded Tippett, “Attend to inner life, self care, have integrity in your inner life, as a way of strengthening your long term ability, your whole self.”