Hockey secures trip to playoffs with win against Lake Forest 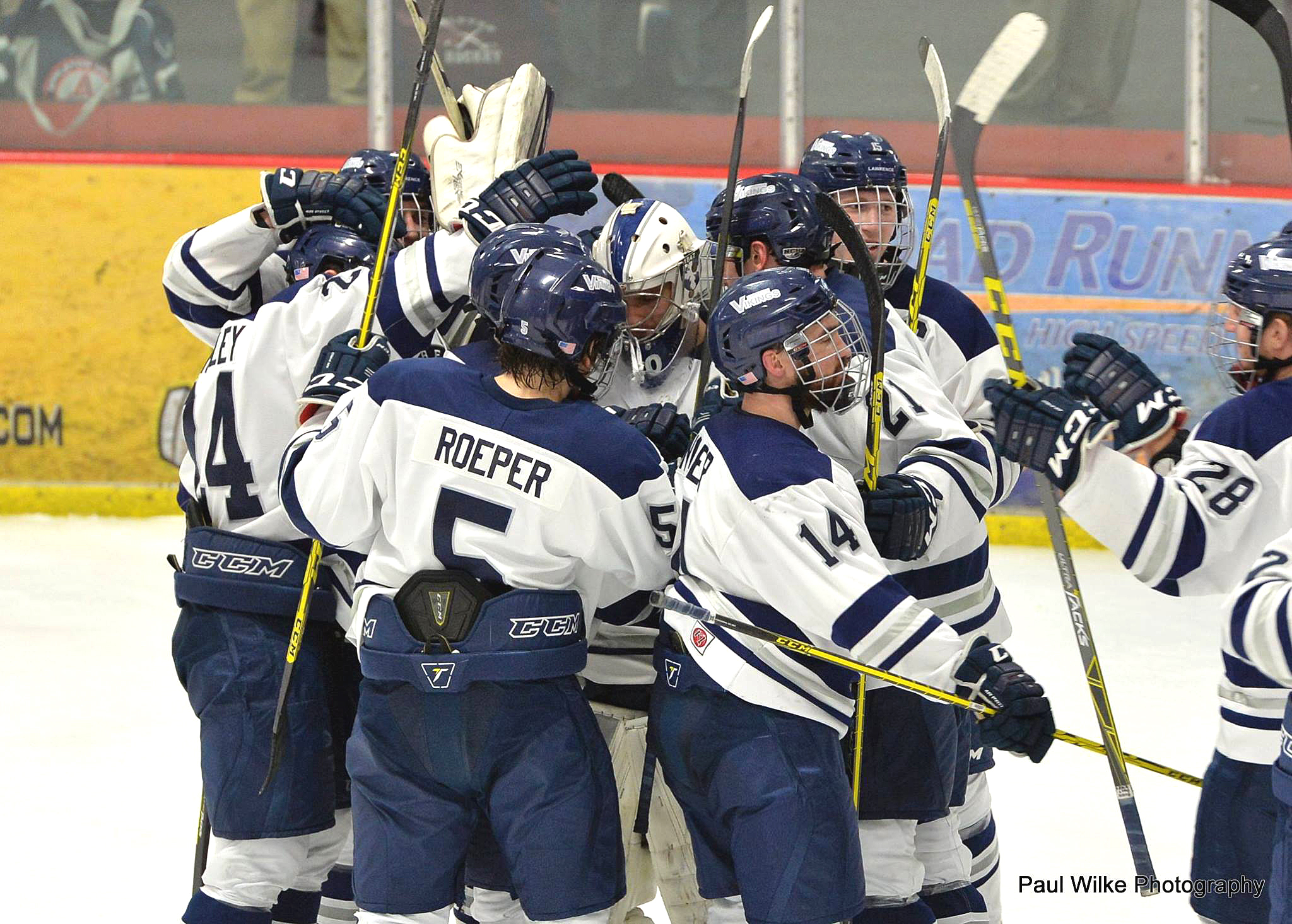 The Lawrence University Men’s Hockey team (Vikings) (9-13-3, 8-9-3 NCHA) delivered a show-stopping performance last weekend in the final matchup of the regular season, splitting the series with Lake Forest College, (Foresters) (10-15, 8-12 NCHA) but clinching a playoff berth right in the nick of time. This series was crucial for both teams, as both came in battling for the final playoff spot in their respective divisions. The result was a weekend of high-stakes and high-energy hockey.

On Friday, Feb. 19, the Vikings traveled to Lake Forest, Ill., to face the Foresters in the series opener. The first period went scoreless, but both teams demonstrated how serious they were about winning. The Vikings were the first to get on the board 7:49 into the second period, when senior Matt Moore scored off an assist from fellow senior Ryan Rumble. Lake Forest responded at 16:53 to tie it up before the second intermission.

After an even first period in shots (9-9) and a Forester-dominated second period (15-11), the Vikings stepped up their game to outshoot the Foresters in the third period 14-12. However, the Lake Forest attempts were the ones that found their mark. The Foresters scored two goals in a short span, putting away one at 5:24 and another at 7:09 to pull ahead 3-1. Lawrence senior Steve Hughes gave the Vikings hope when he scored 18 seconds later to trim the lead. The Vikings continued to dig deep and fight hard, but the Foresters fired one more into the back of the net at 8:43, wrapping up the scoring for the night and earning Lake Forest a 4-2 victory.

Junior and goaltender Mattias Söderqvist made 32 saves for the night, the same number as Lake Forest’s goalie. Both teams went 0-for-3 on the power play.

Clearly, the first game was a close matchup, and both teams went into Saturday’s sequel with guns blazing, eager to prove themselves superior and anxious to seal the playoff deal. It took over 16 minutes for the Foresters to score at Appleton Family Ice Center, but it only took freshman Nick Felan two minutes after that to retaliate on behalf of the Vikings, assisted on the power play by sophomore Austin Frank and junior Brad Mueller.

Coming into the second period tied and unsatisfied, the floodgates were about to be opened. Lake Forest scored two goals in the first three minutes of the second period, but the Vikings were not about to be intimidated. Driven by their cheering crowd and the do-or-die, now-or-never nature of the vital game, the Vikings lit the lamp twice in the span of 24 seconds, all less than a minute after the Foresters thought they were safely ahead. Hughes scored at 3:34 off assists by Mueller and sophomore Mikkel Jøhnk. Senior Renato Engler added a goal of his own at 3:58, assisted by sophomore Lane King.

Tied again going into the third period, the time was right and the Vikings delivered just what the fans wanted to see. Felan scored again at 1:21 to claim the first Viking lead of the series, assisted by Engler and sophomore Matt Montemurro. Eleven hard-fought minutes later, junior Sean Reynolds scored another for the Vikings off assists from freshman Josh Koepplinger and junior Ryan Eardley to widen the lead to 5-3.

The Foresters pulled their goalie while up a man on a power play in an attempt to get back into the game, but Montemurro sent the puck down the ice and into the empty net at 18:59 to finish them off. This final, shorthanded goal brought the final score to 6-3 and brought triumphant cheers from the bench and the stands as the Vikings finally claimed the playoff spot they fought so hard for.

The 2 points from Saturday’s huge win put the Vikings at 19 points, tied with Milwaukee School of Engineering (MSOE) at last and good enough to beat them out for the third place spot in the Northern College Hockey Association (NCHA) North Division. Lake Forest fell just short of Concordia University Wisconsin (11-11-3, 7-10-3 NCHA), who edged them 17-16 out of the third place spot in the South Division for the final playoff spot.

The Vikings traveled to Duluth, Minn., to take on the College of St. Scholastica (Saints) (14-8-3, 12-7-1 NCHA) in the quarterfinal round of the Harris Cup Playoffs. Marian University (17-5-3, 15-4-1 NCHA) will play Concordia for the South Division quarterfinals. First-place Adrian College (21-3-1, 17-2-1 NCHA) and second-place St. Norbert College (21-2-2, 17-2-1 NCHA) each receive a bye in the first round and await the winners of the quarterfinals for the semifinal matchups this weekend.

The first round is single game elimination, so if the Vikings beat the Saints in this one game, they will move on to the semifinals. To determine the next opponent, the remaining teams are re-seeded based on total conference points, and the fourth-place team faces the first, while the third-place team faces the second. The semifinal round is a two-game series with a mini-game if necessary to break a tie.