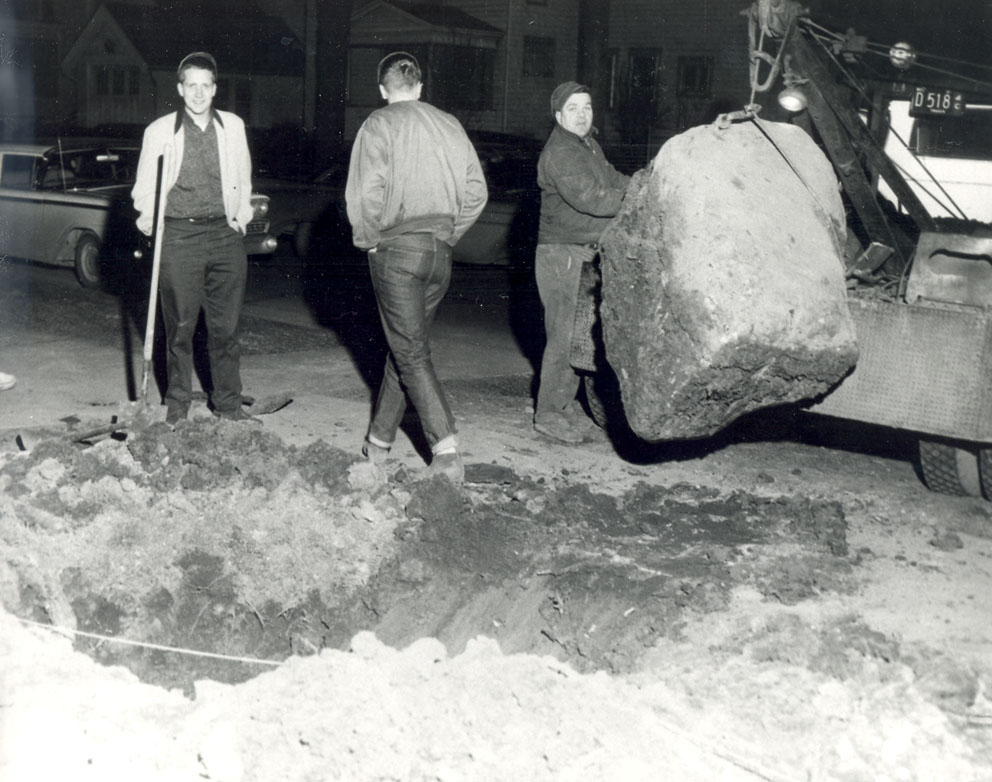 When we think of Lawrence University traditions, a few which come to mind are obvious: the Great Midwest Trivia Contest, Winter Carnival and senior streak. But one that has fallen out of Lawrence’s collective mind is The Rock—the large, two-to-four ton boulder that used to travel between campus groups and has been missing since 1998. Two students took a keen interest in this mystery and decided to devote a radio serial to uncovering any known information about The Rock.

Junior Sarah Axtell and senior Jon Hanrahan will be premiering their mystery serial on WLFM in the beginning of Spring Term. However, for those of you dying of curiosity, the two shared part of the story with The Lawrentian and explained how they got involved with The Rock to begin with.

“At some point last year, we both realized that we very much enjoy the show ‘Serial,’” Hanrahan said. “We also both realized that there’s this missing Lawrence tradition called The Rock, active on campus since 1895 but missing since 1998. Sarah then put it together that we could make our own serial about The Rock—finding out where it came from, where it’s been, and where it might be.”

After both hearing about The Rock offhand, the two began researching its history. “We started in the archives, looking through old Lawrentian articles, and from that, contacting alumni and doing interviews,” Axtell said, noting that the interviews included current members of the Lawrence faculty as well. “You can expect to hear from Curt Lauderdale and we have more upcoming interviews set up,” she said.

So far, they have uncovered a pretty good sketch of The Rock’s past. The boulder used to be a source of competition between organizations at Lawrence—mainly fraternities. “The rock has had a very gender-skewed history. It’s very often been the boy’s thing. The fraternities were the last ones to be battling over it,” Hanrahan said.

“There was one Lawrentian article from the 40’s that sensationalizes the fact that there was a group of girls that was fighting for The Rock,” Axtell added.

“They got it. Those Sage girls got it,” Hanrahan said.

“The Sage girls got it,” Axtell echoed. “But it was crazy circumstance that girls were fighting for The Rock, because it was really a boys’ game.”

This was likely because each fraternity had their own rock of this sort—Sigma Phi Epsilon’s is still on campus, in front of Sankofa House—and the famous Rock was the original property of the fraternity Phi Delta Theta (Phi Delt). “What was going down in 1998 is that for the past few years, The Rock had been under the ownership of Phi Delt. At some point one of the other fraternities—I think Delt [Delta Tau Delta]—realized that Phi Delt had the special Rock, the one that can move,” Hanrahan said, going on to summarize a battle between Delt and Phi Delt for The Rock that involved current Vice President for Student Affairs Nancy Truesdell calling for a ceasefire, as it were. “Generally, it was a tradition that if you move it before Homecoming, it’s in your ownership for the rest of the year. Somewhere around that weekend, that term, it disappeared, left campus.”

There were plenty of battles like this in The Rock’s 100-year history, including a several-year stint where it lived underneath the Plantz parking lot, but it had never left campus. “I just find it so mystifying that we had this boulder with a weight somewhere between two and four tons… but, it’s been missing for almost two decades, just like that. And at this point nobody bats an eye at that, but back in the early 2000s there were a lot of folks who were trying to find it,” Hanrahan said.

Since the two do not know how this story is going to unfold, they do not know what the outcome of their show will be, but it is sure to educate and enlighten about Lawrence’s past. “We’ll be interspersing original reporting with vignettes from [The Rock’s] history, because many funny and strange things have happened to it,” Axtell said. “When I think of some of the few remaining traditions Lawrence does have –Trivia, for example—I think it’s in a similar vein, just doing silly things to be silly. That’s a side of Lawrence that I really like and want to help continue.”

Noting the growing interest in mystery podcasts, the two agreed that using radio is the most effective way to tell this story and any story that comes with a poorly documented or ambiguous history. “It creates a lot more room for the imagination of images, like groups of people moving The Rock around,” Hanrahan said.

“I also think, that in a lot of ways, radio can be more intimate than video or news journalism.,” said Axtell. “You still have the human voice, and microphones are way less pervasive than cameras. You’ll act way more naturally in front of a microphone than a camera. I think this mystery podcast thing is a movement bubbling up. There’s a lot of influence going around right now.”

The Rock detectives will also be updating the associated website: nsupodcast.rocks. 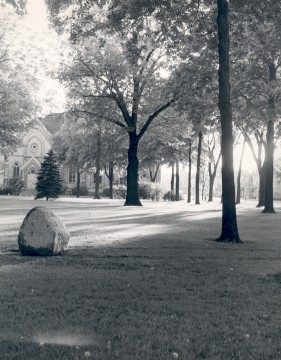 When we think of Lawrence University traditions, a few which come to mind are obvious: the Great Midwest Trivia Contest, Winter Carnival and senior streak. But one that has fallen out of Lawrence’s collective mind is The Rock—the large, two-to-four ton boulder that used to travel between campus groups and has been missing since 1998.…