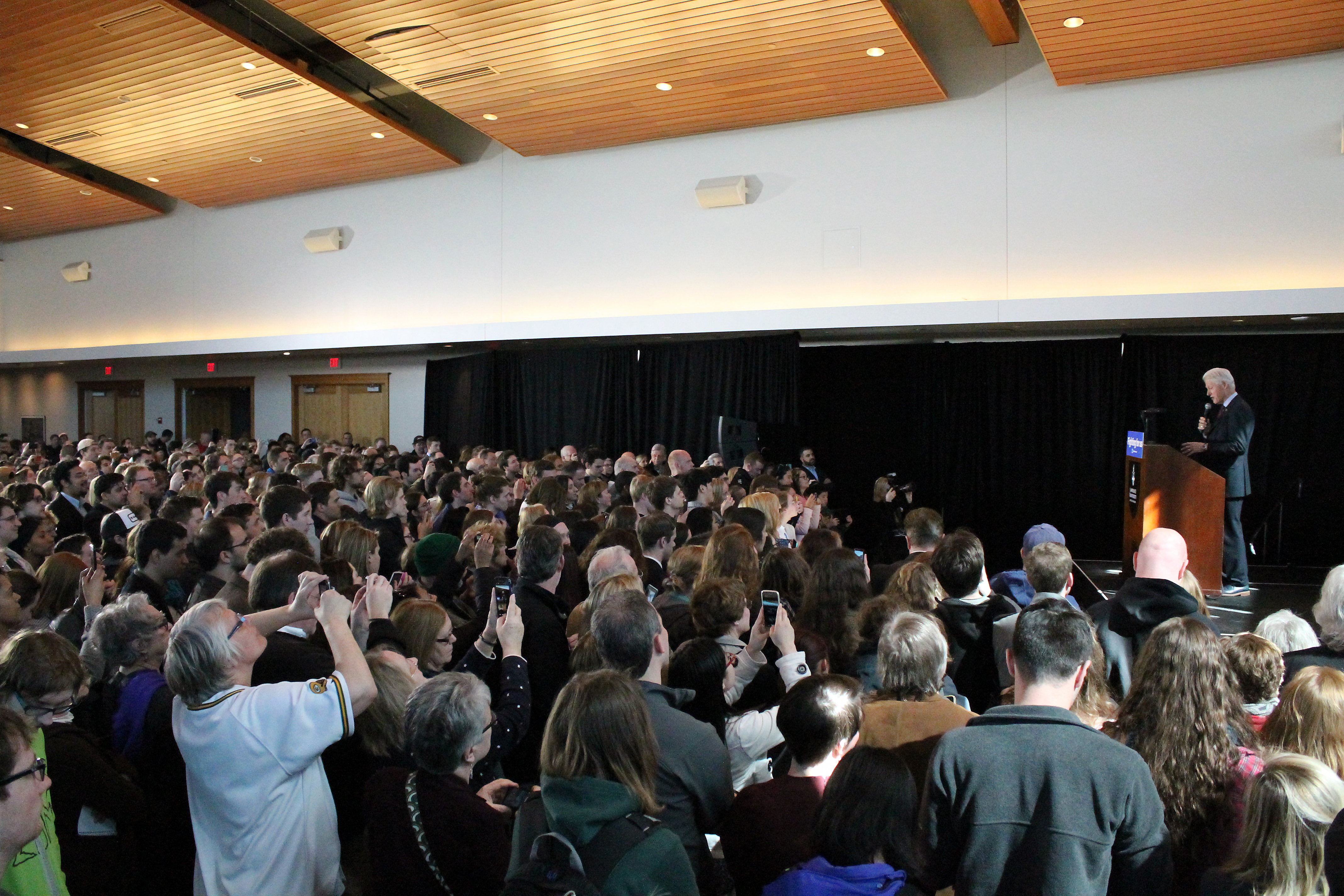 On Friday, April 1, former President Bill Clinton delivered a speech to an overflow crowd in the Warch Campus Center’s Somerset room to drum up support for Hillary Clinton’s campaign prior to the Wisconsin primary elections.

Speaking to a crowd that contained a significant number of Lawrentians, President Clinton tailored his speech to the interests of the audience. He talked at length about the issue of student loan debt, outlining Hillary Clinton’s plan to reduce the debt by allowing students to refinance their loans and forgiving the remaining balance of outstanding payments after 20 years.

President Clinton contrasted Hillary Clinton’s strategy with Bernie Sanders’ plan of providing free college tuition for all through tuition subsidies granted by the federal and state governments. He cited some state governments’ lack of interest in higher education funding, asking the crowd “Do you really believe after what Governor Walker has done to education in Wisconsin that he would do that?”

Hillary Clinton’s plans to address income inequality were also discussed, along with her idea of providing a 15 percent tax credit to companies that implement profit-sharing programs with their employees. President Clinton contrasted this plan with his view of the current economic situation, in which corporations controlled by “activist shareholders . . . [that] don’t give a rip about what their company does for a living” and focus on maximizing personal profit at the expense of the overall welfare of the U.S.

Income inequality was also addressed through a discussion of Hillary Clinton’s job creation strategy. President Clinton argued that initiating programs to improve national infrastructure and utilizing clean energy resources available within the nation’s borders would create a multitude of well-paying jobs while improving the viability of the country’s manufacturing sector. Commenting on the benefits of bringing more manufacturing jobs back within the country’s borders, President Clinton stated, “Materials, transportation and energy are a bigger part [of promoting manufacturing jobs]. If we cut the energy costs and eliminate transportation, we’re the biggest market in the world. We can make anything here and we should do that.”

In the closing minutes of his speech, President Clinton emphasized the importance of remaining optimistic about the future of the U.S., saying, “It is always darkest before the dawn; you should be upbeat about the future of this country, and especially your own future,” he continued. “This election is about how we will rise together.”

The primary elections take place on Tuesday, April 5. The polling location for students living on campus is at Alexander Gym, and shuttles are being run throughout the day. Make your voice heard, and vote.