Unique clubs on the rise at Lawrence 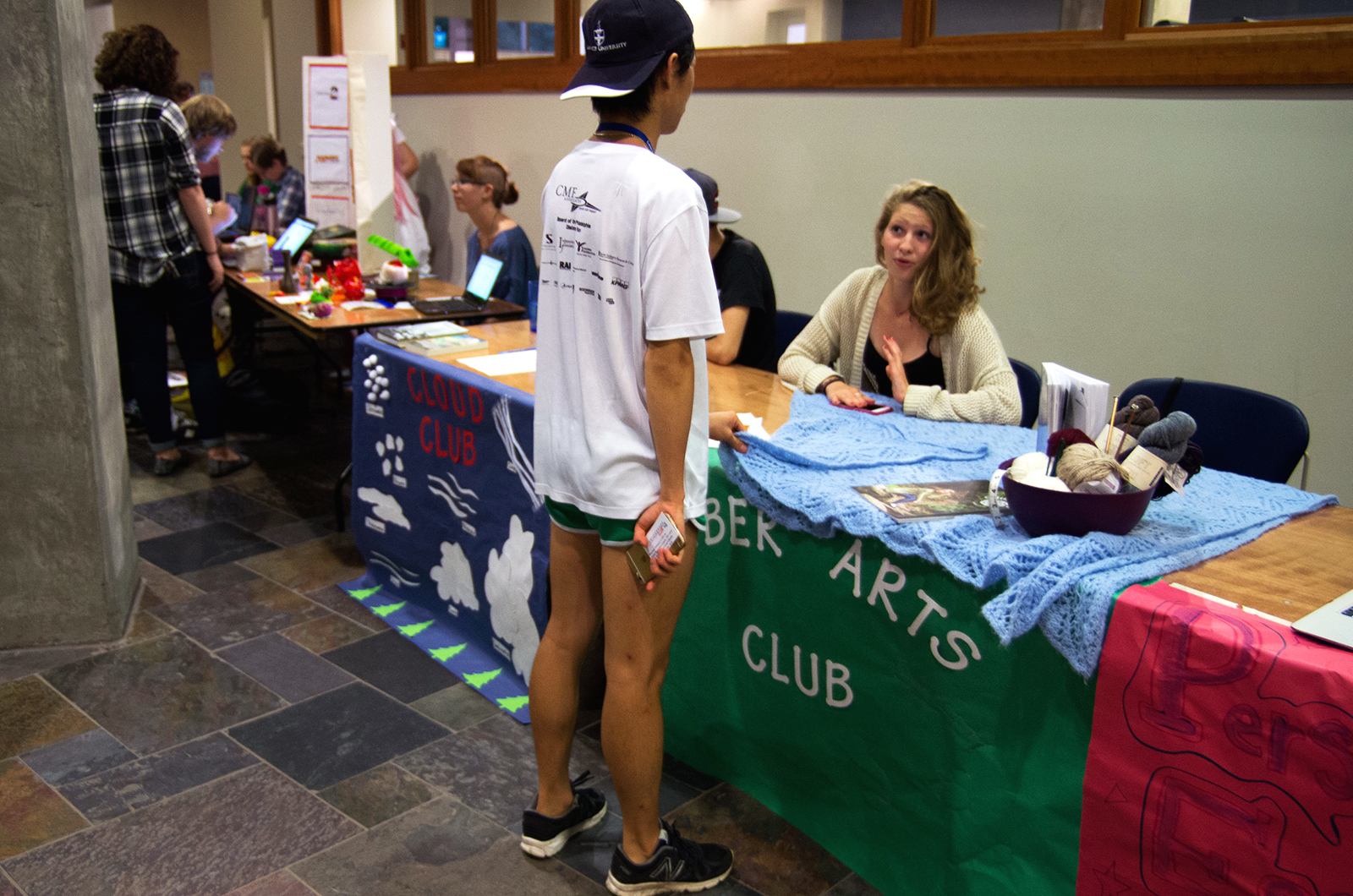 Freshman talked to a representative from Fiber Arts Club.
Photo by Billy Liu.

For some, college is a place where studying and going to class are the best ways to get the most out of the thousands of dollars you scraped together last minute between scholarships, part-time paychecks, and student loans. For the more sensible majority of college students, going to college is about balancing the academics with other activities.

Lawrence University students benefit from a broad network of activities to get involved in, ranging from varsity sports to trivia contests.

These activities and many more were highlighted at this year’s Activities Fair organized by Campus Life last Friday, Sept. 16 at the Warch Campus Center. Students got the chance to meet with some upperclassmen involved in on-campus clubs and learn how to get involved. Along with getting some sweet freebies and meeting people with similar interests, the fair gave freshmen and other new faces to the Lawrence campus an opportunity to sign up for any club that they found interesting.

This event gathered an enormous crowd of people, with club sign-up lists filling up within the first half-hour. This was the first opportunity for the Class of 2020 to really get involved, and many of them were not afraid to extend their contact information to four or more organizations. Most, if not all, of these clubs were founded by Lawrence students and have been approved through the Lawrence University Community Council (LUCC), which encourages students to gather friends and kickstart some clubs that they can be interested in.

Now, if you feel like you can’t really rock that jockstrap or you just aren’t that into swing dancing, and the idea of forming your own club seems to be a little too complicated, there were plenty of unique and new clubs featured at the Activities Fair that may suit your needs.

One of these clubs is Clouds of LU Scholars (CLOUDS). Lawrence was officially introduced to its very own cloud-watching club when the LUCC approved its founding in Spring Term 2015. Junior and a founder of CLOUDS, Hannah Levy, recognized that some might find this club to be a joke, but she insisted that it is a very “cirrus” organization.

“We’re getting people off their phones, looking up, appreciating nature, traveling around and being outside,” said Levy. The club meets every other week on Sunday afternoons, and is the perfect way for you and your friends to admire all the sky has to offer.

If your future with cloud-watching isn’t really looking up, you could try joining Fiddle Club. Founded by Lawrence alumna and current Broadway star, Martha McDonnell ‘14, Fiddle Club is the perfect way for you to learn from fellow fiddlers and refine your fiddle skills.

“Being in the conservatory, I’ve noticed that there are not a ton of ensembles that are just purely for fun and are low stress,” noted super senior and Fiddle Club leader Isabel Dammann. “I think it’s really important to have clubs like this because there are tons of musicians at Lawrence that aren’t in the Conservatory that want a way to keep playing music.”

Dammann also pointed out that it was a great way for Conservatory students to learn from each other and explore new styles they may not have much experience with. The Fiddle Club meets Friday nights at 7 p.m.

Another club introduced to Lawrence in the 2015-2016 school year was the Fiber Arts Club. This organization opens its doors to anybody interested in knitting, crocheting or the many other fiber art forms.

Senior and co-founder of the Fiber Arts Club, Alex Thorp, commented on the founding last winter: “A friend and I realized that there was no knitting or crocheting club on campus, and that all the ones in the past have failed, so we wanted to start one that would stand the test of time and wouldn’t fall apart when the leaders graduated.”

Thorp looked forward to an exciting year with this club and hoped to engage with many other organizations on campus by volunteering their craft or helping other clubs make friendship bracelets.

If these clubs don’t suit your needs, there are dozens of other clubs on the rise that are eager for more members: Cultural Food Club, Slam Poetry Club and even a Texas Hold’em Poker Club. The most important thing is to get out there, make some lasting friendships, and find that thing that makes your time here worthwhile.