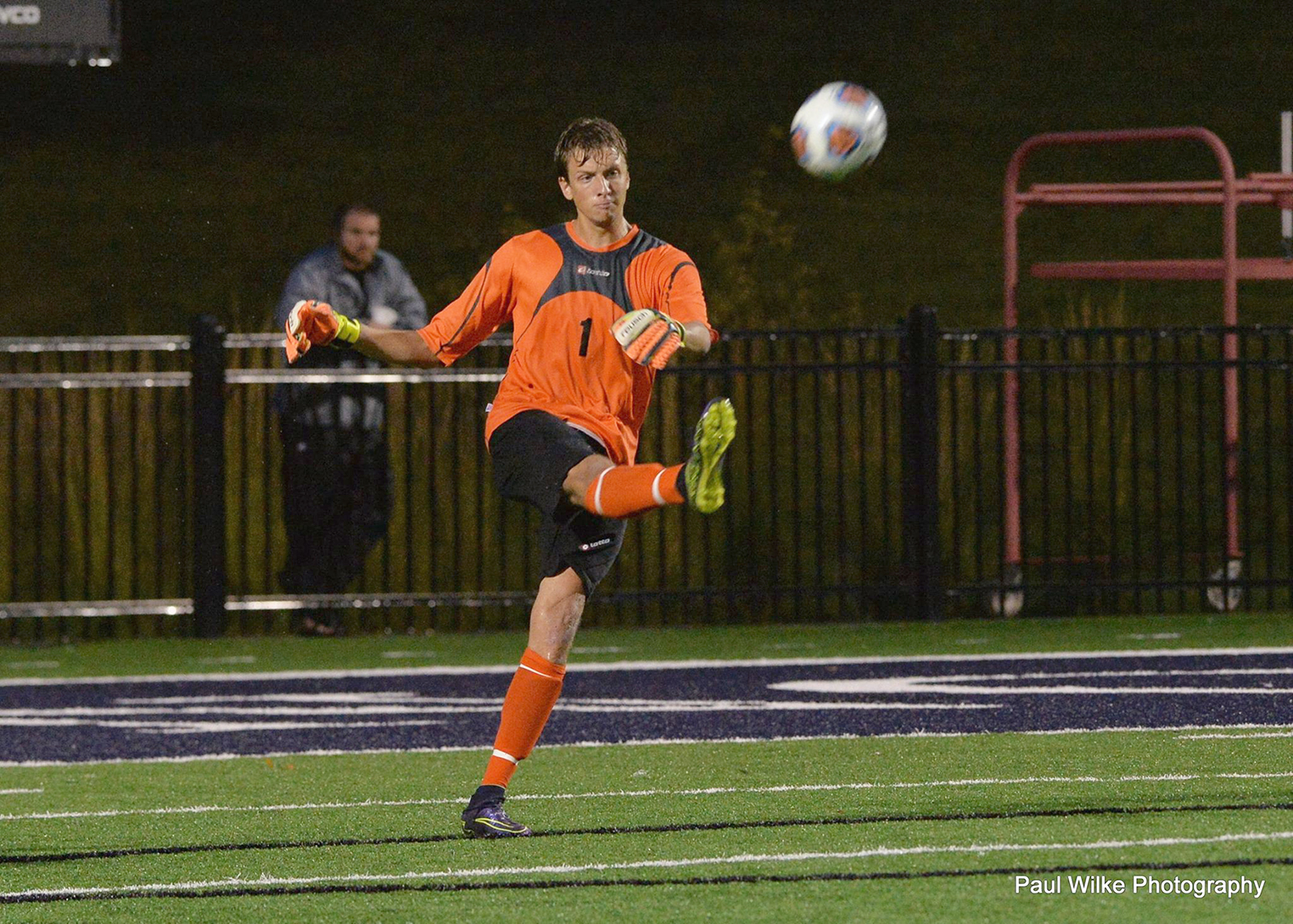 Keeper Joe Krivit clears the ball during the Vikings game against MSOE on Sept. 7.
Photo courtesy of Paul Wilke

Lawrence University’s Soccer teams have had a rollercoaster ride of a season so far, but have been working hard to improve their game as the season continues on, accepting each victory with gratitude when presented with the opportunity. This previous week, the men’s and women’s teams played two games apiece, striving towards victory during one and falling to defeat during the other.

The Vikings’ men’s team, 2-4-0, had a successful game at Edgewood College on the 14th, winning 6-0. The game started off hot with sophomore Taylor Reifert scoring his first goal of the season in the 26th minute. Following that, senior Michael Deremo scored the second goal for Lawrence in the 50th minute with aid from junior Robert Desotelle. A free kick from just outside the 18-yard box permitted Reifert with another goal, which accounted for Lawrence’s third goal, taking the lead to 3-0. Later in the game, senior Keanan Wilson scored Lawrence’s fourth goal with an assist from Deremo. Senior Jack Blodgett, with the help of Wilson, was the next to score for Lawrence, making it 5-0. Deremo scored the last goal of the game at 89:43 with an assist from Blodgett. With Lawrence’s 19 shots against Edgewood’s 11, senior Joe Krivit earned his second shutout of the season with four saves.

The following game against UW-Platteville wasn’t as successful for the men’s team, but still allowed them to gain experience. Despite the momentum provided from senior Max Loebl’s goal in the final minutes of the game, with credited assists from Wilson and Deremo, Lawrence was unable to score when making it deep on the Platteville end of the field. Lawrence had four shots during the game, while Platteville had 13. Krivit had six saves throughout both periods. Platteville stole the lead early on in the game from a corner kick, but didn’t pick up the second goal until 50:41 from a deflected attempt in clearing for an own goal.

The Vikings’ women’s team, 1-5-0, played a close game against Lakeland University on the 14th, and came out on top with 1-0. This nonconference game was locked in by junior Ryan Berkley’s first goal of the season at 7:35 with an assist from sophomore Mari Hubanks despite being short-handed by two players in the second half due to injuries. Lawrence had 14 shots, while Lakeland had 12, and junior Kori Looker was able to acquire her first career shutout with three saves.

The next game at UW-Stevens Point started off rough and Lawrence was unable to rebound from Stevens Point’s goal in the first minute. Lawrence lost 6-0 on the 18th, allowing Stevens Point to acquire a shutout. Stevens Point had 27 shots, while Lawrence had three. Looker had eight saves during both periods.

With Lawrence’s Soccer teams’ valiant efforts to turn around from these losses, they will continue to look ahead and tackle each game independently of the rest and take as many wins as they can get. The next games for the men and women will be played at home on the 24th versus Knox College and on the 25th against Illinois College. The men will play first at 1 p.m., followed by the women at 3:30 p.m.

Keeper Joe Krivit clears the ball during the Vikings game against MSOE on Sept. 7. Photo courtesy of Paul Wilke Lawrence University’s Soccer teams have had a rollercoaster ride of a season so far, but have been working hard to improve their game as the season continues on, accepting each victory with gratitude when presented…