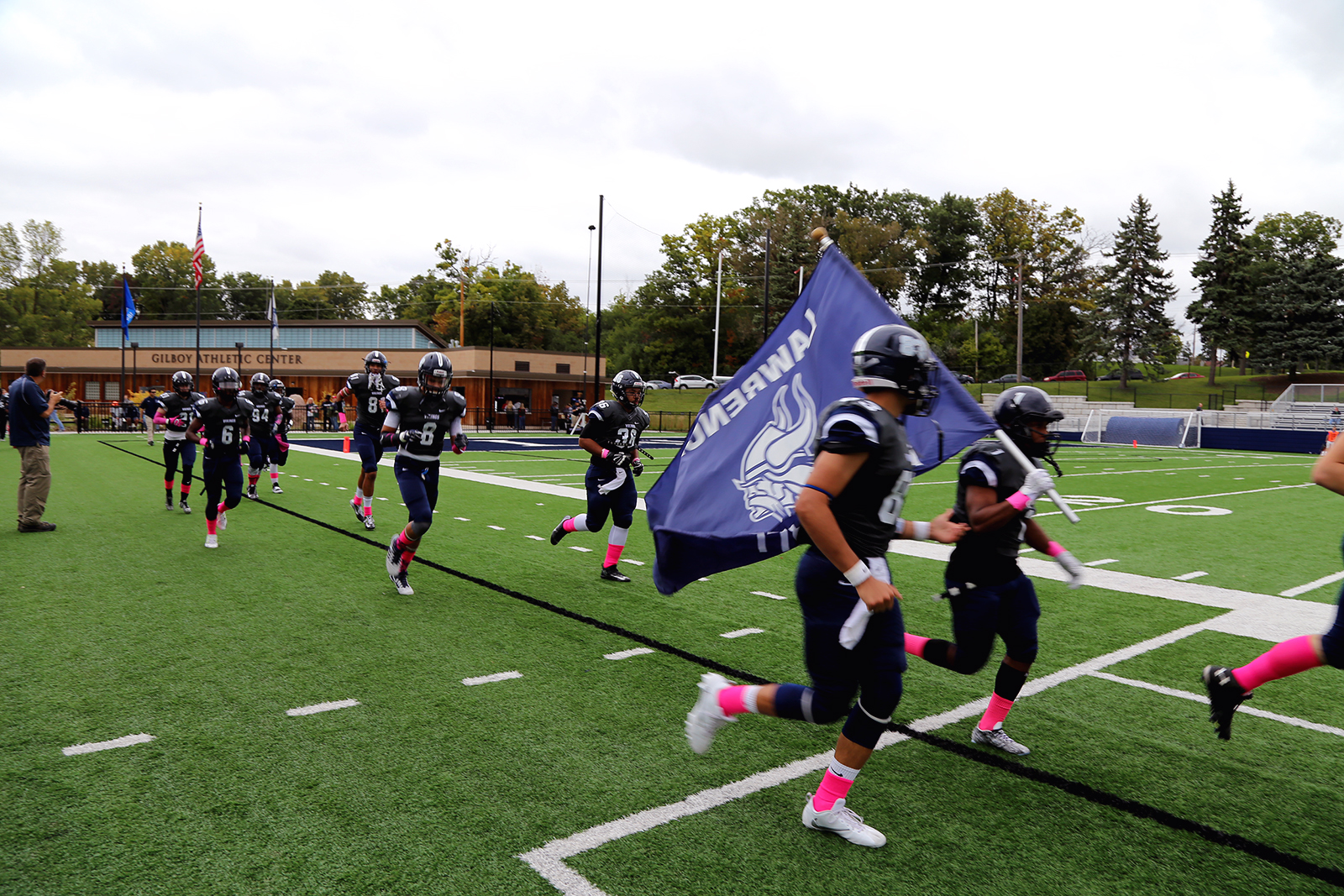 The Vikings take the field against Beloit on Oct. 1, 2016.
Photo by Victor Nguyen

The Lawrence University Football team was back in action taking on the Beloit Buccaneers (2-2, 1-1 MWC) at the Banta Bowl Saturday, Oct. 1. The Vikings were looking for a win after dropping their last game to Illinois College.

The Vikings got exactly what they wanted out of the game. After exchanging possessions, Beloit was the first to get on the board with a 46-yard field goal with just under seven minutes remaining in the first quarter, taking the lead 3-0. The Vikings were quick to respond with sophomore Ryan Butterfield scoring on a two-yard touchdown run with 4:47 to go in the first, putting the Vikings up 7-3 after a good extra point from senior Pat O’Mahoney. The Vikings were gifted with great field position for this drive after freshman Terrell Meyer ran back the kickoff 60 yards to the Beloit 26. Beloit added an additional three points from a 24-yard field goal just before the end of the quarter making the score 7-6 Lawrence.

The Vikings added to their lead at the beginning of the second quarter as freshman Wasonu Allen ended a 29-yard run in the end zone for a touchdown at the 12:22 mark. O’Mahoney’s kick was good expanding the Vikings lead to 14-6. Beloit was putting together a strong drive before junior Dan Rothbauer intercepted Beloit quarterback Danny May’s pass at the Lawrence 17, giving the Vikings the ball back with 9:45 remaining in the quarter. The ensuing Viking drive ended in a punt, but a Beloit fumble on the return recovered by junior Jake Gostisha gave Lawrence the ball at the Beloit 8-yard line. The Vikings were able to capitalize as junior Donnel Haley added another touchdown on an 8-yard run. Senior Wes Hetcher was able to find the end zone for the two-point conversion giving the Vikings the lead 22-6. Beloit responded with a touchdown of the own with 1:06 remaining in the 2nd quarter; however, they were unable to convert on the two-point attempt making the score 22-12.

The Vikings began the third quarter with a seven-play, 65-yard drive capped off by an Allen 19-yard touchdown run and O’Mahoney extra point making the score 29-12 Vikings at the 11:20 mark. Beloit added another field goal, this one from 30 yards, to cut into the Viking lead 29-15 with just under six minutes left in the quarter.

Butterfield started the fourth quarter off with a bang for the Vikings with an 82-yard touchdown run on the first play of the quarter. O’Mahoney added another extra point expanding the Viking lead to 36-15. After one Beloit first down, the Vikings would regain possession off of a fumble recovery by freshman Tykee Atkins; however, the Vikings were unable to get any points from the turnover. Beloit would attempt a comeback scoring off of a 42-yard pass from May to Michael Nolden with 1:52 remaining in the game. A good extra point made the score 36-22 Vikings. The onside kick attempt by Beloit failed, allowing the Vikings to run out the rest of the clock and claim the victory. 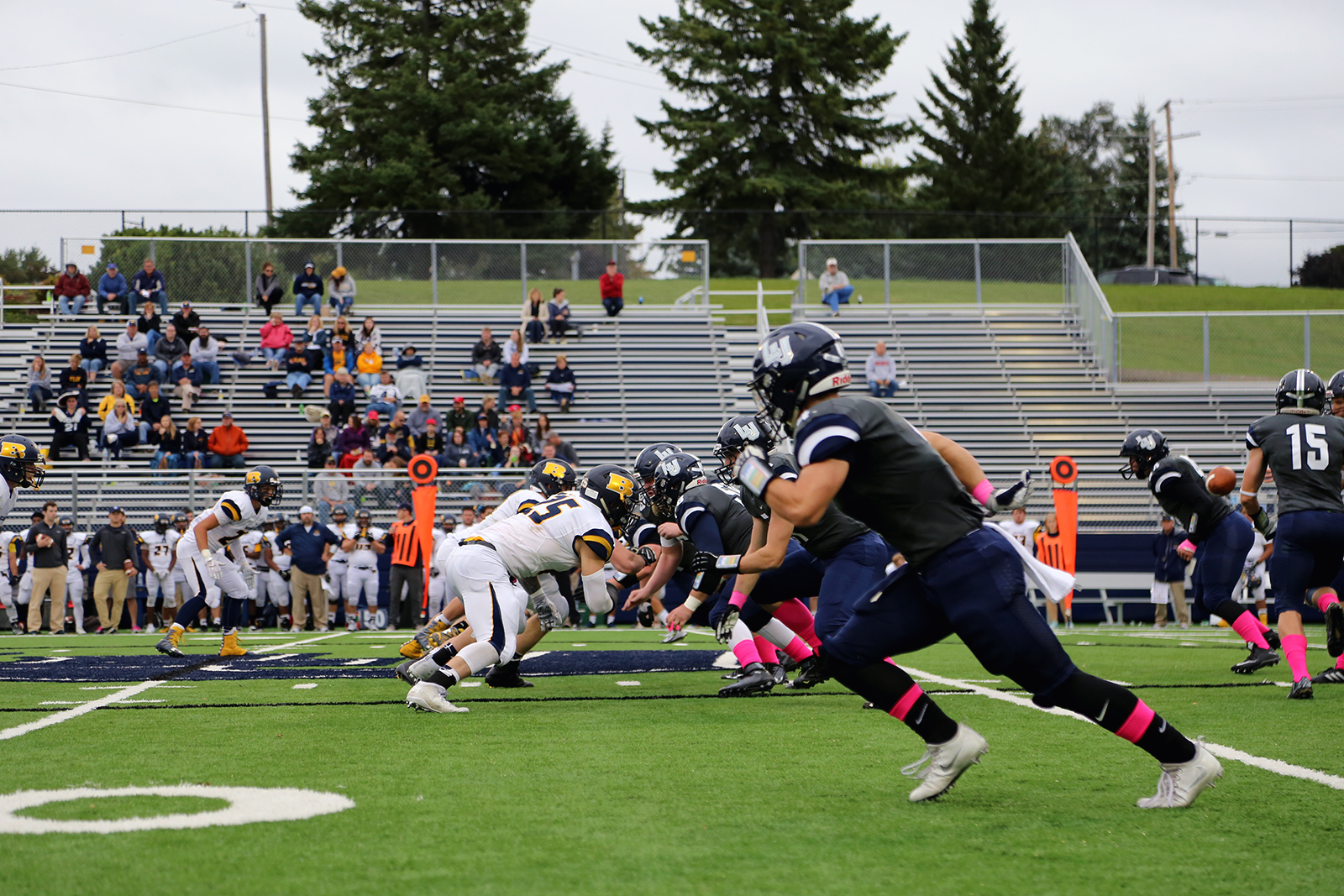 Lawrence football took down Beloit for the team’s second win this season.
Photo by Victor Nguyen

The Vikings came together in all phases of the game for the win. Senior Jackson Straughan credited the Vikings success offensively to tight team chemistry as they “clicked when we were on the field this Saturday. We were driving the ball a lot. We had nearly 350 yards on the ground, so rushing yardage, and that was something that we needed.” Both Butterfield and Allen rushed for over 100 yards in the game. Butterfield’s 82-yard touchdown run was the second-longest run play in Lawrence history.

The Viking defense also played an important role in the win. “We were just dominating up front defensively and we held them pretty short on rushing yards so that helped a lot” said Straughan. The defense was led by sophomore Hunter Adams with 11 tackles and Gostisha added another 10. Special teams were not to be out done according to Straughan as they “had some very key special team plays that put us in good field position for us to score.”

The Vikings (2-2, 1-1 MWC) are having a good season and are looking to build on the good energy going forward. “Right now, we’re 2-2 and I feel like we’ve really come out and surprised a lot of people” explained Straughan. A lot of the new found success can be created to a strong freshman class. As the season continues the team hopes to “keep dominating the conference [and] to kind of go in with a positive mindset knowing that these are all games we could win” Straughan added. The Vikings will look for their next win Oct. 8 when they travel to Macalester.

The Vikings take the field against Beloit on Oct. 1, 2016. Photo by Victor Nguyen The Lawrence University Football team was back in action taking on the Beloit Buccaneers (2-2, 1-1 MWC) at the Banta Bowl Saturday, Oct. 1. The Vikings were looking for a win after dropping their last game to Illinois College. The…