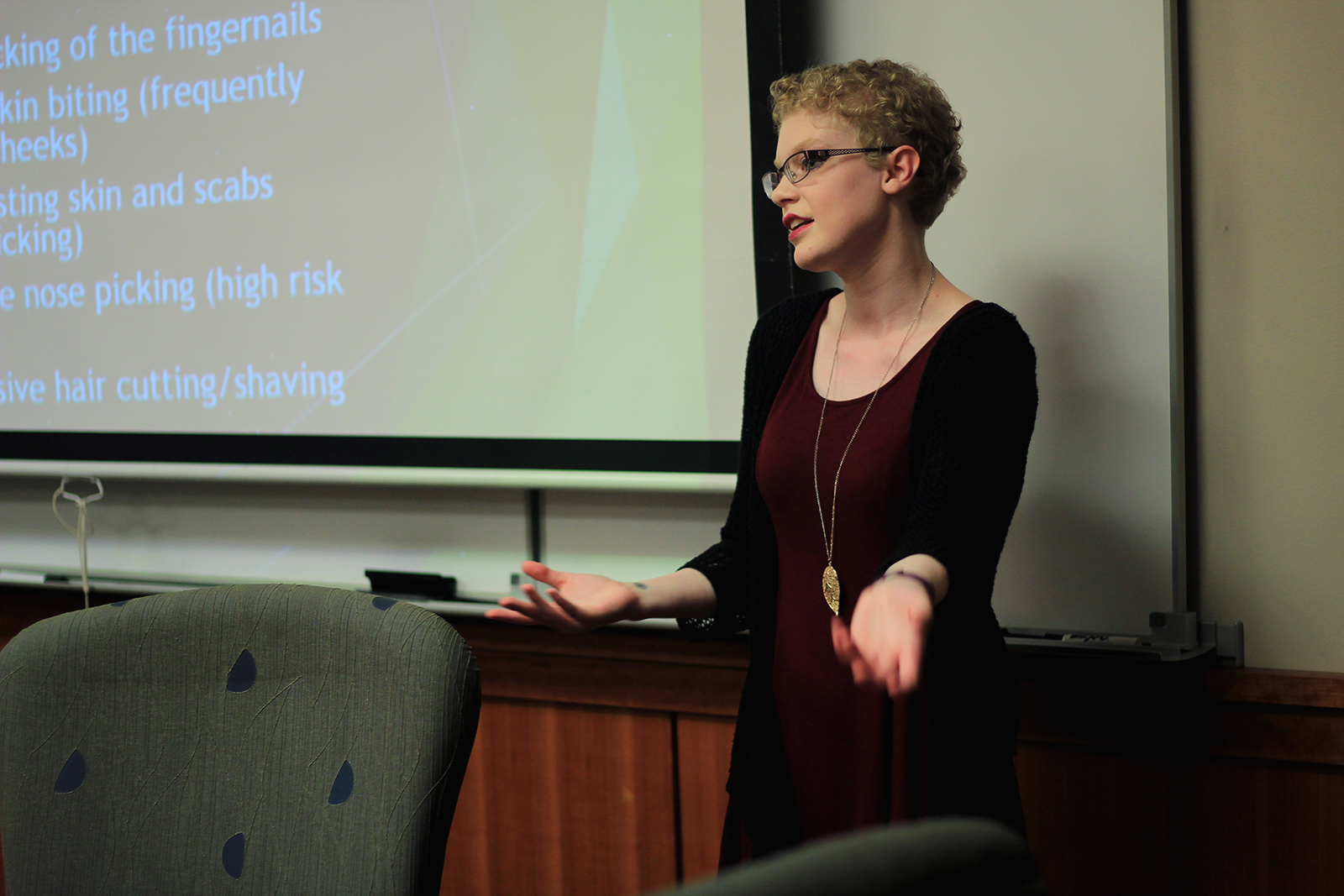 Hair-pulling, nail-biting and skin-picking are common Body-Focused Repetitive Behaviors (BFRBs). They are not just habits or tics. In North America alone, 10 million people have a BFRB. “They’re more common than eating disorders,” said freshman and host of the BFRB awareness presentation Eileen Bauer, which occurred on Oct. 6 in the Kraemer Room of Warch Campus Center.

These are types of compulsive disorders. It is “not OCD, but it’s classified under the same category,” Bauer explained. Unlike OCD, however, BFRBs cause physical harm to the body, such as skin infections, bald spots that could lead to complete baldness, scarring or intestinal problems. BFRBs usually manifest in puberty and can be temporary or recurring in the sufferer’s life.

Eileen then went into the specifics of three common BFRBs: trichotillomania, which is hair-pulling, excoriation, or skin-picking and onychophagia, which is nail-biting.
Two in 50 people will suffer from symptoms in their lifetime, making the disorder one of the most common BFRBs. Trichotillomania is when people pull out their hair, usually starting small, like eyebrows or eyelashes, then moving to the hair on the scalp. It can be hair from any part of the body, though: eyebrows, eyelashes, body hair, scalp hair, even pubic hair. It can also lead people to eat the hair that is pulled, which causes intestinal and stomach problems.

Skin picking is when a sufferer repeatedly touches, rubs, scratches, or picks at their skin, usually starting with some perceived, small imperfection. However, it is also just a way to relieve stress. That causes lots of damage to the skin. This can start at any age and affect all kinds of people.

Nail-biting is maybe the most common BFRB. Many people do it, often without even realizing it. It is one that has been described as automatic. Repeated chewing on the inside of the cheeks or lips is a similar disorder.

“It’s actually common to have multiple of these disorders,” Bauer said. “Someone who has it will ‘move on’ to another part of the body.” Usually, it is from eyebrows to hair.
Why do people do this? Bauer responded that it “alleviates tension and anxiety or OCD, or depression.” It also may have a genetic predisposition, but that has not been proven yet. Research is still being done on BFRBs. There is also no specific medication for any of the aforementioned disorders. However, Habit Reversal Therapy (HRT) has proven helpful in many cases. This is when instead of picking at the skin, a sufferer picks at a fiddle toy. This takes the damage off the body and helps because BFRBs are sensory-based disorders.

One last misconception is that BFRBs are thought to be synonymous with self-harm. People who have a BFRB do not exhibit these behaviors intentionally to harm themselves. It is a compulsion.