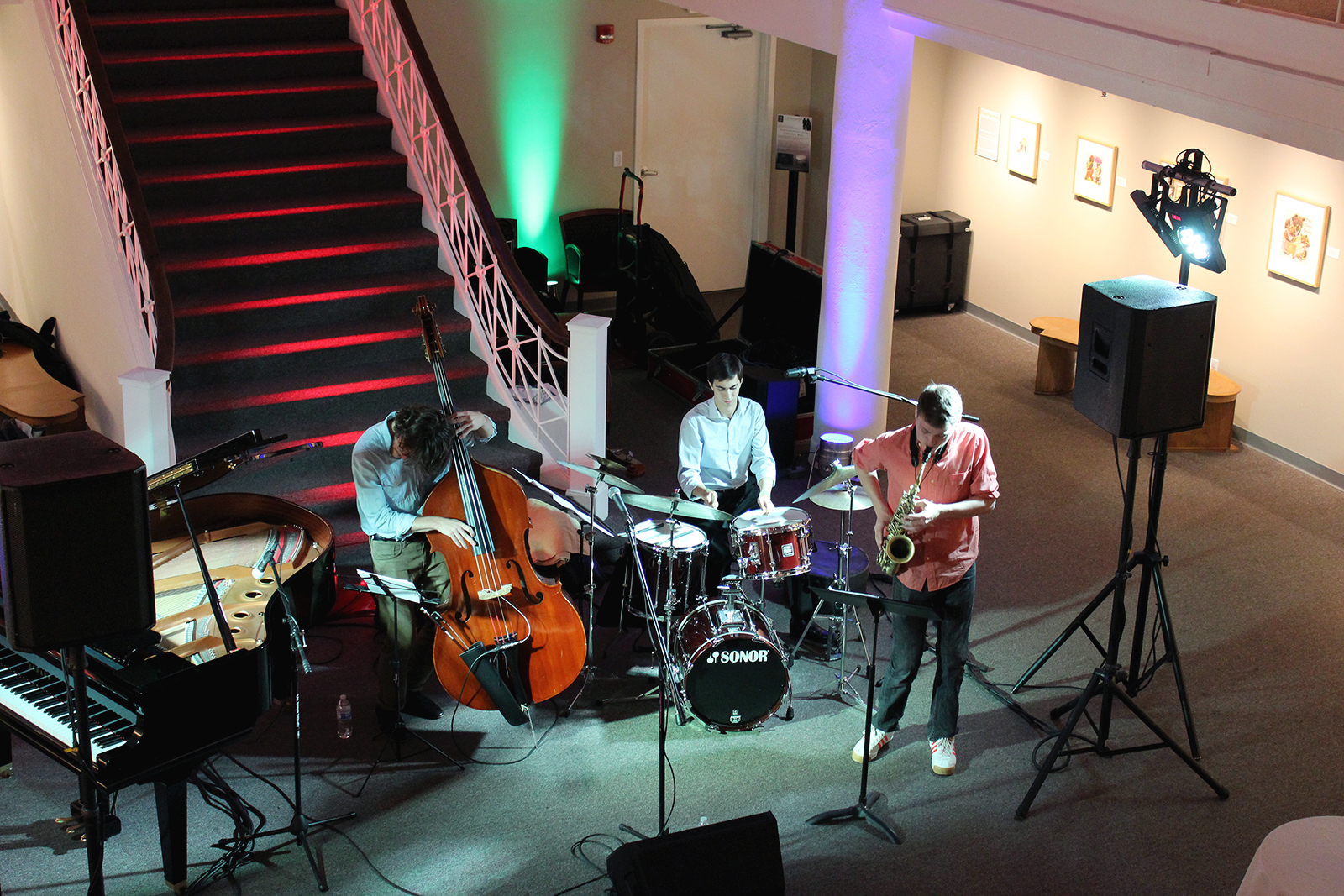 Koby Brown, Jakob Heinemann and Jack Breen open the first concert of the Trout Museum of Art’s seventh concert season of “Jazz at the Trout.”
Photo by Hikari Miné

On Thursday, Oct. 20, The Trout Museum of Art opened season seven of its “Jazz at the Trout” concerts. The concert involved a Lawrence University jazz trio and guest artists Mardra and Reggie Thomas, a husband-and-wife duo based in Illinois.

While people explored the exhibition, a student jazz trio from Lawrence set the mood with an hour-long set of thoughtful music including both familiar jazz standards and newer works. There was a carpeted stage area complete with fixed colored lights for ambiance.

The group is comprised of junior Koby Brown on percussion, senior Jakob Heinemann on double bass and senior Jack Breen on saxophone. Their most memorable tunes were “In Walked Bud” by Thelonious Monk and “Lonnie’s Lament” by John Coltrane. Each member coolly improvised virtuosic solos, responding to the mood of the gallery though the music.

At 7:30 p.m., the featured guest artists Mardra and Reggie Thomas appeared onstage. Following a gracious introduction by Trout Museum of Art President Pamela Williams-Lime, they began to play. The first tune was instrumental only; Mardra waited off to the side while Reggie played with their backing bassist Marlene and percussionist Tim.

Mardra is a jazz vocalist who started her career in St. Louis. She is also an actress and voice actress; in addition to her world class performances with Reggie, she is known for her live covers of Billie Holliday.

Reggie, who also began his performance career in St. Louis, is currently the head of Northern Illinois University School of Music’s Jazz Studies Program. He travels to collegiate jazz festivals and events all over the country, but prefers to spend his time in the Midwest. Having heard of Lawrence’s jazz program, he was excited to perform at the Trout Museum of Art so close to the school’s campus.

The two of them had obvious chemistry on stage. The casually elegant way they laced their piano and vocal lines together could only have come from years of experience performing together. They approached the concert theme, “Classic Modern Jazz,” loosely and with humor; they replaced the lyrics to the classic “I’m Gonna Sit Right Down and Write Myself a Letter” to “I’m gonna sit right down and like myself on Facebook.” They also played Stevie Wonder’s “Never Dreamed You’d Leave in Summer” rearranged for their ensemble.

After the music ended, the gallery lights came up and people were invited to pass through the featured exhibit once again before they exited. Near the museum’s main door was a recycled instrument sculpture by Dennis Voigt, which looks like a cheerful bird made out of saxophone parts. Every guest artist featured in the Jazz at the Trout series will sign the sculpture after their performance. An ongoing silent auction will determine the final owner of the sculpture at the end of this year.

The Trout Museum of Art will hold the next concert in the “Jazz at the Trout” series on November 17, again with an opening performance by the Lawrence University jazz trio at 6:30 p.m. and with guest artists performing at 7:30 p.m. For more information and to purchase tickets, please visit troutmuseum.org. Thanks to Hannah Bain and Molly Frederick for allowing The Lawrentian to cover this event.