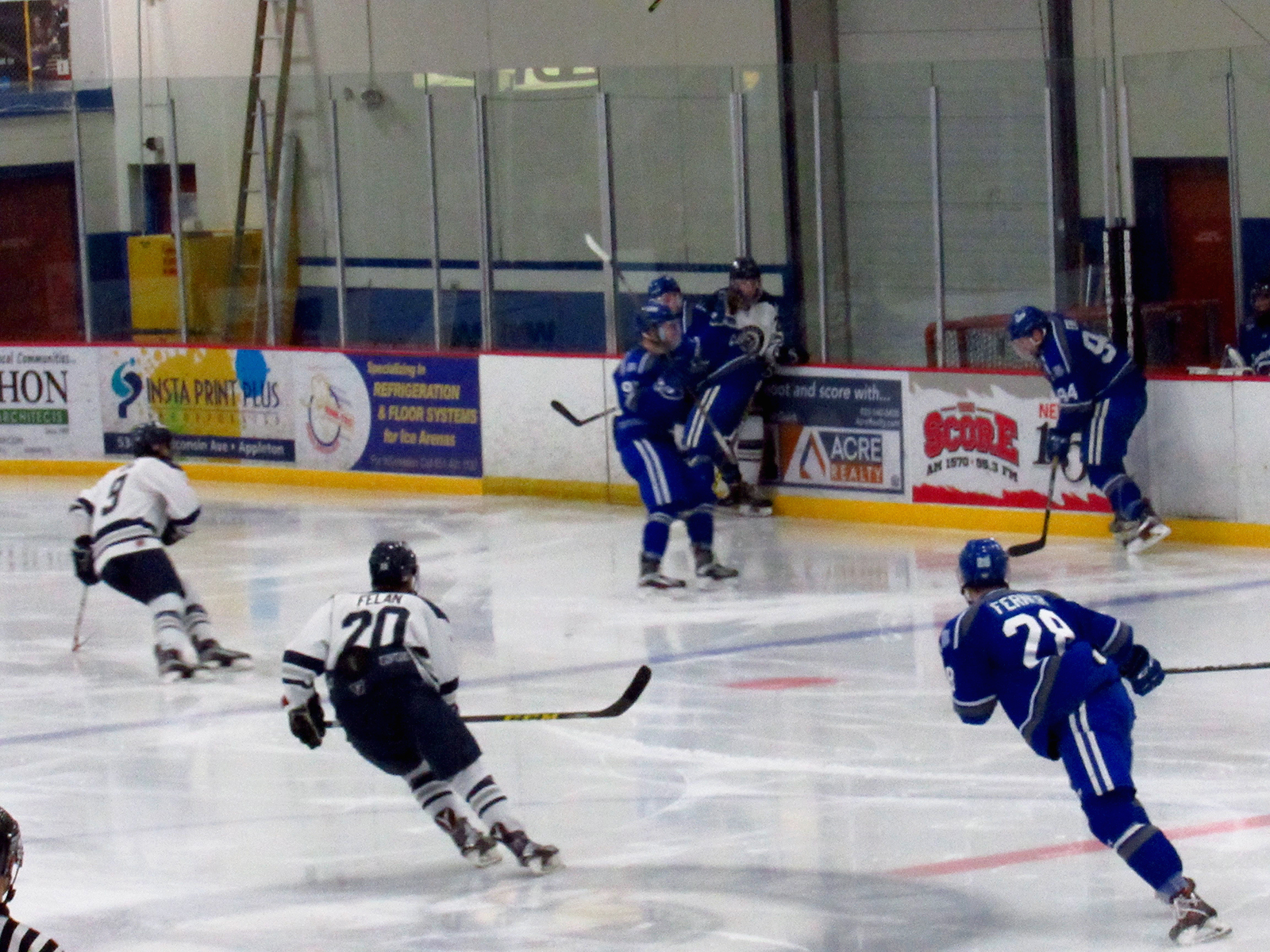 Lawrence University’s Hockey Team fell short this weekend in two competitive games against Concordia University Wisconsin. Concordia, 9-4-1 overall and 6-3-1 in the Northern Collegiate Hockey Association (NCHA), hosted the first game on Jan. 6. The Viking’s, 4-8-1 overall and 3-4-1 in the NCHA, hosted the other on Jan. 7.

The Vikings started off strong in the first game at Concordia on Friday with freshman Matt Beranek’s first collegiate goal, assisted by freshman Daniel Gysi, and senior Sean Reynolds at the 8:04 mark in the first period. Later in the first period, Concordia’s Jim Pearson tied the game at 1-1, assisted by Tanner Bull and Dante Hahn. At the 13:28 mark of the second period, Reynolds scored a short-handed goal assisted by freshman Carson Knop to put the Vikings back on top at 2-1. Concordia’s Jon Brumewell tied up the game in the third period at the 6:14 mark with the help of Anthony Pickering and Taylor Gauld. On a power play, Concordia pulled ahead to 3-2 with a goal from Josh Adkins assisted by Jake Switzer and Adam Fauchoux at the 12:14 mark. With 7:12 remain in the period, the Vikings tied the game with Knop’s first collegiate goal, assisted by Blake Roubos, junior, and Jake Drinkard, freshman. With twenty seconds left, Concordia’s Switzer scored the game winning goal, assisted by Bull and Pearson, with a final score of 4-3. The Vikings’ freshman Evan Cline stopped 37 shots and Concordia’s Jack Romanuik stopped 28 shots.

Concordia was off to a quick start at Lawrence with a goal at the 2:22 mark of the first period with a goal from Eric Therrien, assisted by Barndt Weldon and Gauld. Pearson expanded Concordia’s lead against the Vikings to 2-0 at the 11:06 mark, assisted by Hahn and Bull. The Vikings cut the lead to 2-1 in the second period by sophomore Josh Koepplinger’s power play goal, assisted by juniors Austin Frank and Lane King at the 6:27 mark. Within the first two minutes of the third period, the Vikings were able to tie up the game with a goal from Roubos assisted by Knop. Concordia gained the lead again at the 7:10 mark from Connor Hogg, assisted by Jared Pilet and Bull. A little over three minutes later, Concordia scored again with an unassisted goal from Brumwell, making the game 4-2. Roubos scored again at the 11:28 mark to make it 4-3, with assists credited to Drinkard and Knop, but the Vikings were unable to score a fourth time to tie the game up. The Vikings’ senior Mattias Soderqvist stopped 31 shots, while Romanuik stopped 37 shots.

Despite these two losses, Lawrence University’s Hockey Team is doing its best to pull out some wins for its remaining games. The Vikings’ will not return home until Jan. 27, but they have a set of away games at Aurora University on Jan. 13 and 14.