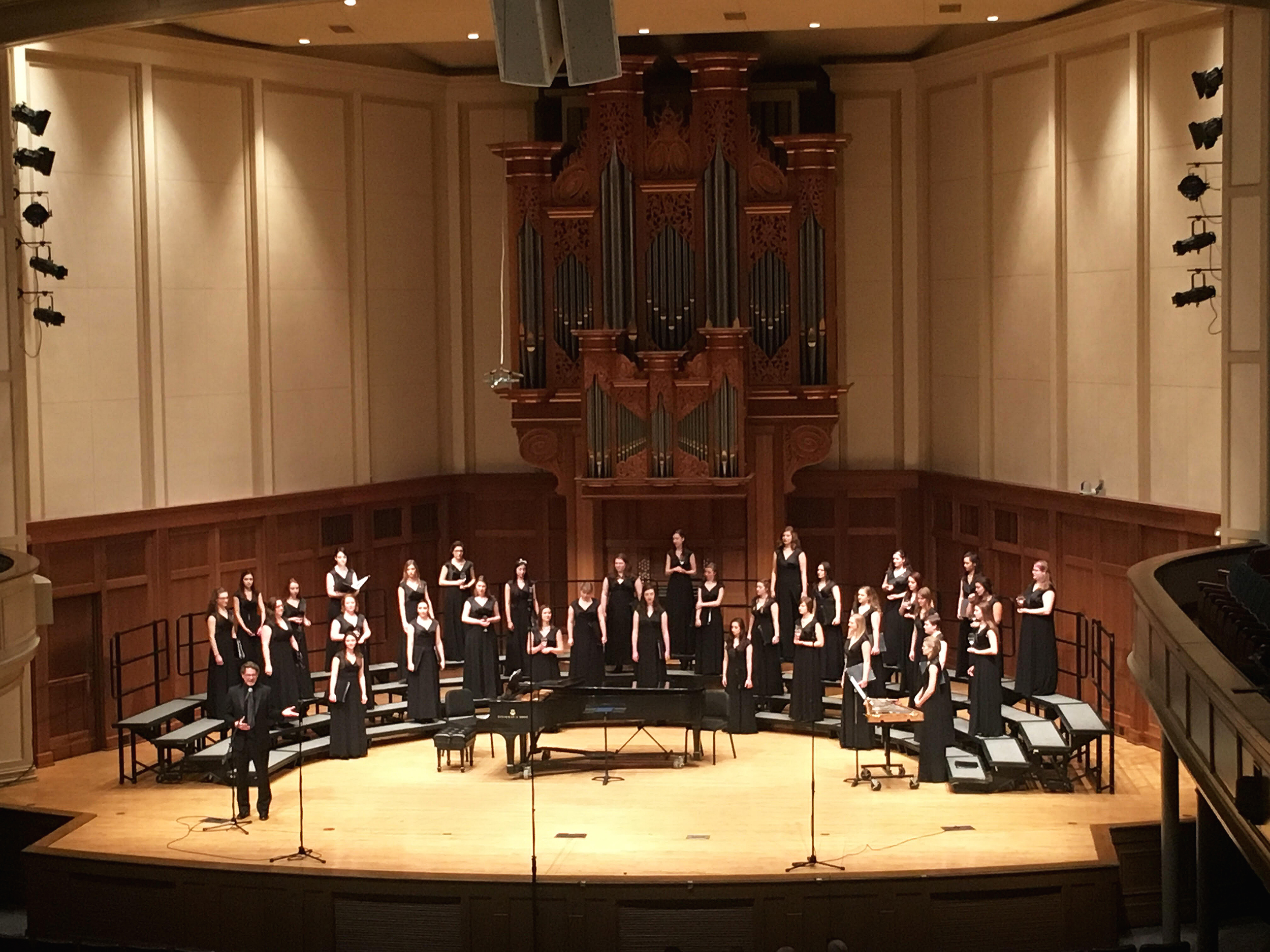 Cantala performs in the Chapel.
Photo by Kiran Mufty

On Saturday, Feb. 25, the Lawrence University Choirs performed their concert “Light Amid the Darkness.” Held in the Lawrence Memorial Chapel, the concert consisted of performances by Viking Chorale, Cantala and Concert Choir. A total of 17 songs were performed, and the choirs were conducted by Associate Professors of Music Phillip A. Swan and Stephen M. Sieck. Each choir put on a phenomenal show, and the theme of finding light in dark times was particularly touching.

The Viking Chorale is an all-inclusive choir, allowing any Lawrence student to join. The impressiveness of this choir is a statement to the talent present at this university. To perform their opening song, the choir walked into the balconies of the Chapel. Sitting in the balcony, I found myself surrounded by a wall of music. The beautiful harmonies of this song, “Lux Aurumque” by Eric Whitacre, were chilling. Because the choir is made up of so many musicians, the totality of their voices was particularly resonant and wholesome. The choir performed two other songs; their last song contained a beautiful alto solo by freshman Fox Segal.

Cantala, the women’s choir of Lawrence, performed seven songs. The song selection was fantastic, and the lyrics were simultaneously uplifting and poignant. “Rise Up!” by Jake Runestad contained complex harmonies and rhythms that were all performed extremely well. The lyrics “there shall never be another season of silence” sent a powerful message to the audience. This combination of touching lyrics and great musicianship evoked many emotions, including hopefulness. During “Northern Lights” by Eriks Esenvalds, several of the vocalists played musical glasses; this gave a unique and airy sound that was fitting given the title of the piece.

Finally, Concert Choir wrapped up the concert. As always, the choir executed crisp pronunciation and perfect cut-offs. They displayed fantastic control and vibrato, and the piano accompanist, sophomore Nick Suminski was impressive. One of the most moving pieces of the night, “Flight Song” by Euan Tait, was about the importance of music in our lives. Each vocalist was extremely invested in the song, and nearly every musician sang without even glancing at their sheet music. Many of the songs shifted between grandiose dynamics to soft whispers. The audience was clearly pleased with the performance.

All three of the choirs purveyed the theme of “Light Amid the Darkness” very well. At one point between songs, Professor Sieck thanked many of the people who had been a source of light for him throughout the years. He also left the audience with a very important message: being a light in the life of others is a very beautiful and vital thing. The entirety of the concert encapsulated this meaningful theme accurately and superbly.

Cantala performs in the Chapel. Photo by Kiran Mufty   On Saturday, Feb. 25, the Lawrence University Choirs performed their concert “Light Amid the Darkness.” Held in the Lawrence Memorial Chapel, the concert consisted of performances by Viking Chorale, Cantala and Concert Choir. A total of 17 songs were performed, and the choirs were conducted…