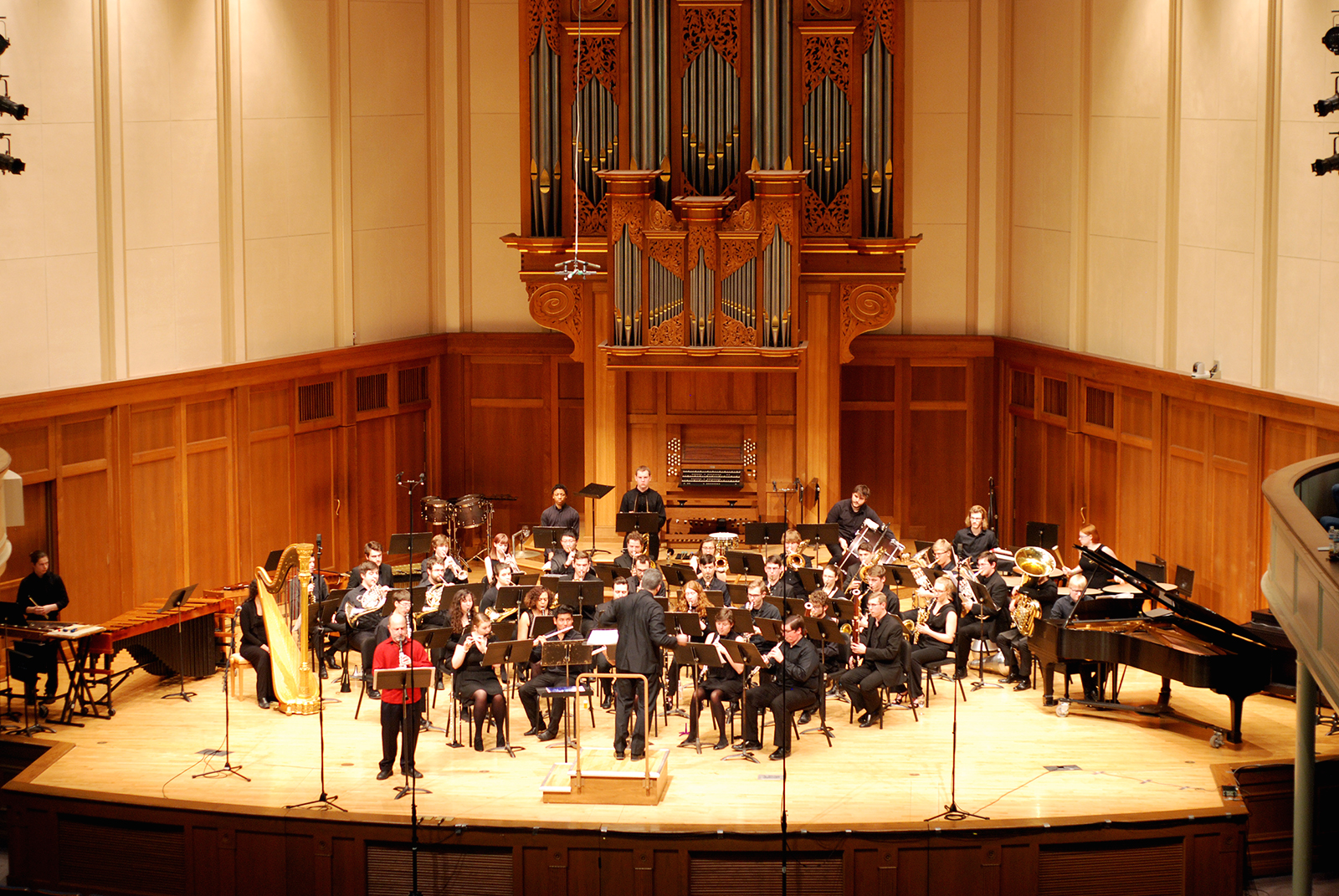 On the afternoon of Sunday Feb. 26, the Lawrence University Wind Ensemble performed its Winter Term concert, titled “Contemplations: The Inner Life.” They collaborated with two guest artists to perform an extended concert program featuring works that pertain to introspection and complex emotions.

Before the music began, Conductor Andrew Mast spoke about the concert’s theme. He selected works that relate to the beauty and depth of the mind. Mast is interested in using concerts to make a point or convey a message to the audience; tonight’s message was about the power of deep contemplation and self-awareness. Additionally, one of his goals is to program a work by a Lawrentian composer on every Wind Ensemble concert this year.

For this concert, that composer was alumnus Evan Williams ’10. Williams composed the first piece, “Dodekatheon Sketches, Book I.” While the piece was first completed in 2012, he revised and reorganized it for the Wind Ensemble’s world premiere performance. He conducted rehearsals of the piece several times the week before the concert, giving and receiving feedback from the players. He also met with music composition students to discuss his writing process.

The three movements of “Dodekatheon Sketches” each represent a different Greek god or goddess. “Fanfare for Athena” involved offstage trumpets calling from behind the audience, while “Ares, God of War” featured virtuosic percussion parts meant to imitate the sounds of war. Lastly, “Demeter, Goddess of the Harvest,” was smaller in feeling; peaceful harp and piano played underneath woodwind soloists. Offstage piccolo and clarinets provided atmosphere by imitating bird calls and chirps as the piece faded to a conclusion.

Next, Associate Professor of Music David Bell, Lawrence’s clarinet professor, played the 2006 “Concerto for Clarinet and Band” by Óscar Navarro. Bell wore bright red and played with matching boldness and vigor. The piece was written in the style of film music, and one could almost hear the rapid scene changes as it progressed. Sometimes, Bell played fast sixteenth-note scales and arpeggios over a rowdy dance rhythm, and at other times he played long, romantic lines over deep and moody orchestral drones. The audience loved his visible passion and excitement. Bell was the first soloist to be featured in a concerto performance this year.

Next up was Frank Ticheli’s “Rest.” This work is one of Mast’s personal favorites; he told the audience that when he travels to work with other ensembles, he teaches the piece at every opportunity. The piece, originally written for choir in 2000, was reworked for band in 2011. It was inspired by a Sara Teasdale poem written before she committed suicide in 1933. The Wind Ensemble’s rendition was gentle, evoking of the sound of a choir.

After a short break, it was time for the largest work on the program, David Maslanka’s “A Child’s Garden of Dreams.” The piece is based on the story of a girl who wrote about her dreams before her tragic death. Her parents found her writing and brought it to psychologist Carl Jung, whose studies later inspired Maslanka to write the piece.

Each movement of the piece is based on one of the otherworldly and dark images from the girl’s dreams. Maslanka uses the wind instruments to create musical pictures and unique sound worlds. In movement three, “A horde of animals frightens the dreamer. The animals increase to a tremendous size, and one of them devours the girl,” he uses active percussion patterns and tremendous orchestral “shouts” to terrify the audience.

Another highlight was movement two, “A drunken woman falls into the water and comes out renewed and sober,” in which Maslanka’s writing almost seems to slow time and gives a true sense of submersion. The music gives a “look at the other side,” which is the heart of the theme of the concert program. Each instrumentalist was tasked with bringing out the story in their playing, and the performance was very convincing.