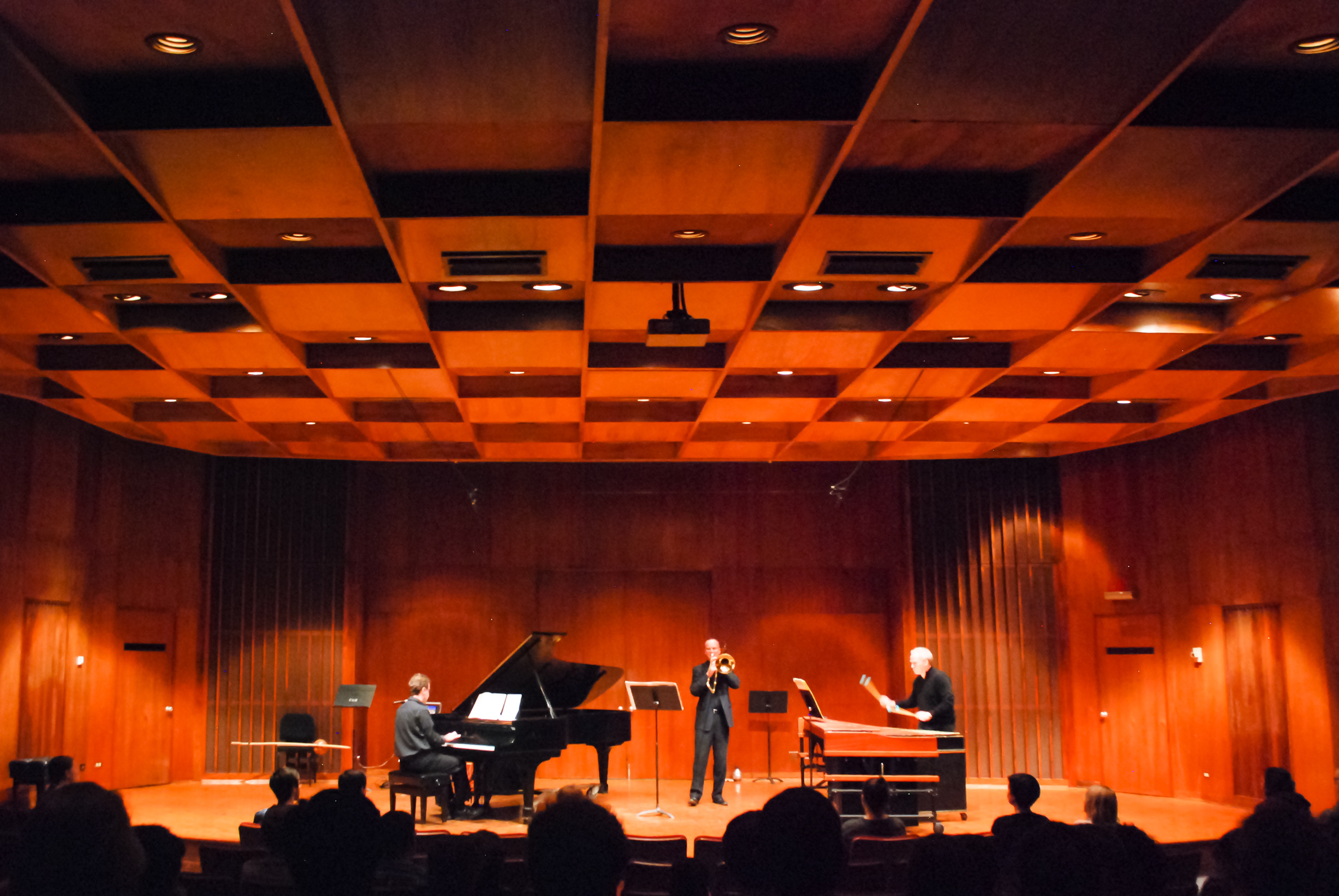 Tim Albright and Dane Richeson perform in Harper Hall.
Photo by Hikari Mine.

On Monday, April 3, Harper Hall was presented with the outstanding musicianship of Dane Richeson, Professor of Music, and Tim Albright, Assistant Professor of Music. With Richeson on percussion and Albright on trombone, as well as an assortment of other musicians and dancers, the performance consisted of a wide array of musical genres. Each piece captivated the audience in a non-replicable way.

In the first song—“Shiner,” by Sarah Kirkland Snider—the trombone lines by Albright were overwhelmingly beautiful; he truly produced the clearest and smoothest of tones. This was accompanied by viola, marimba and harp—an odd and unexpected group of instruments. But the sounds of this unlikely group blended together in an extremely fitting way. Often, the harp and marimba held a rhythm, while the viola and trombone played a sonorous melody back and forth. All the while, Margaret Paek, Instructor of Dance, danced in the small doorway of the stage, picking up pace as the intensity of the music swelled.

Next was “Trombone Trio” by Charles Wuorinen, an eccentric piece full of sporadic and staccato interjections on piano by Associate Professor of Music, Michael Mizrahi. Unconventional interplay between musicians created a nearly labyrinthine effect. Wherever a logical ending to the song should have been, the music continued to twist and turn through different sections instead. Finally, the song abruptly ended when the audience least expected it.

At the center of the set, Richeson and Albright played five successive songs as a duet. As Richeson switched percussion instruments between each song, Albright performed alone in a rich cadenza style during the brief interludes. This group of songs was the highlight of the night; a personal favorite was “Bau and Bone,” a collaborative composition by Albright and Richeson. The piece started with Richeson using a looping mechanism to record an initial rhythm on berimbau, accompanied by a breathy chant. This recording repeated continuously as the two musicians performed over it. The audience was completely attentive, captivated by the complex rhythms played by Richeson and Albright’s melodic yet percussive sounds. After the set of duets, the excited audience roared its approval to the musicians.

For the final song of the night, the pair was joined by Mark Urness, Associate Professor of Music, on bass. During the song, student dancers sprawled on the ground and very slowly crawled on stage, gradually getting closer to the musicians. When the performance ended, the audience clapped uncontrollably for several minutes as Richeson and Albright bowed and embraced one another. At some point between songs, Albright articulated how lucky he was to get to share this music with the audience. Similarly, I, along with the rest of the audience, left Harper Hall with a feeling of gratitude for being able to experience such a well-done concert.