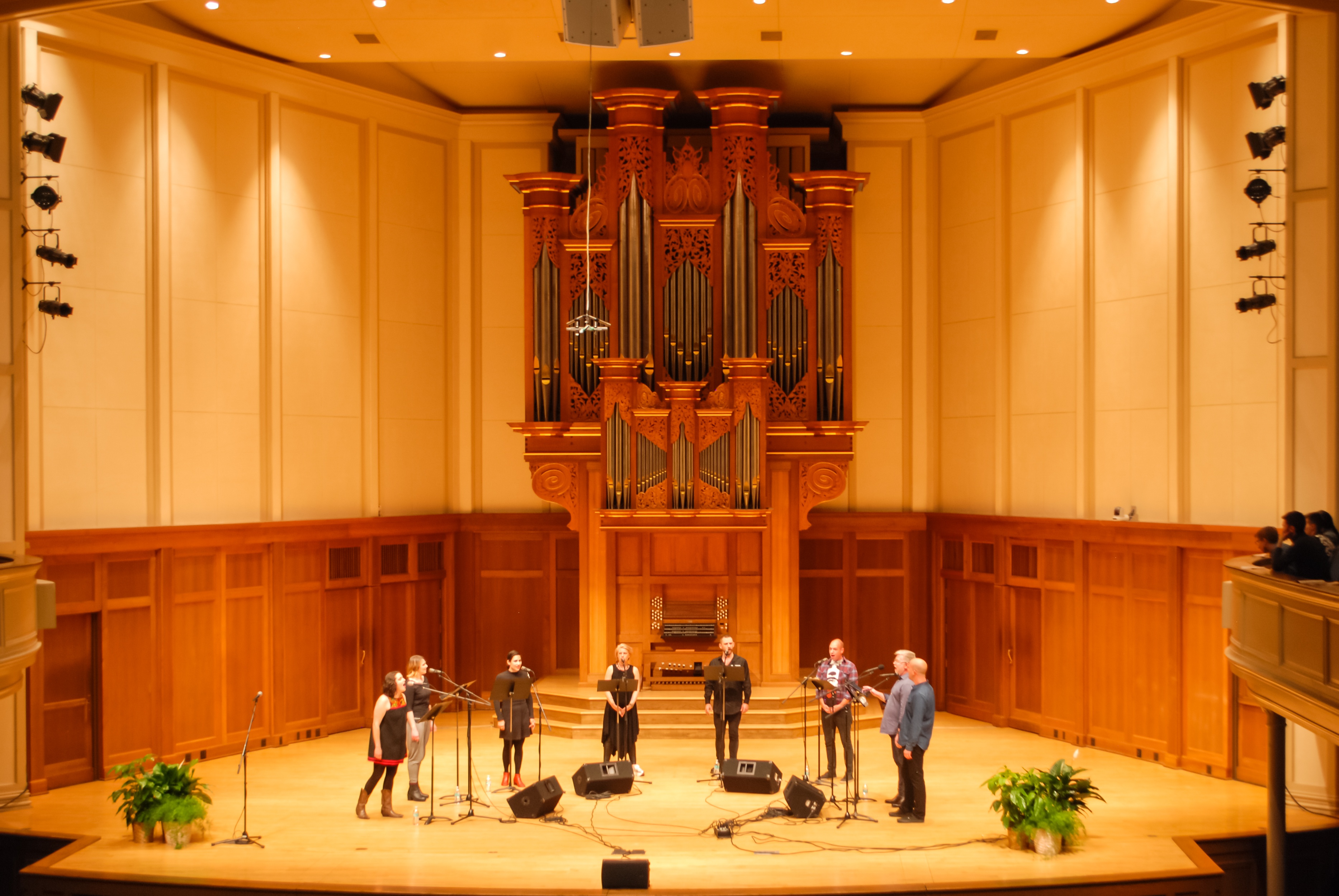 Occasionally, I will see a concert I am to cover and leave able to appreciate it, but other than that, feel little else. This can be due to a plethora of reasons, some known immediately, some still not figured out and some in between. In the case of Roomful of Teeth’s concert on April 7, it was a dense mix, and this column will take a more selfish form as I work out how this concert affected me—or did not—and what I took from it despite this.

The first half of the performance was Caroline Shaw’s “Partita for 8 Voices,” the group’s most famous piece. Highlighting the overall talent of what the eight vocalists are capable of, the piece was more intriguing than it was resonating for me. The sounds each of them made were incredible, inhuman at points, but throughout its 25 minutes, the performance lacked the electricity and punch the composition deserved. After discussing these sentiments with other attendees, two sources of these problems arose—one being the sound/balance and the other being that half the group was made up of substitute vocalists.

Nearly every Conservatory student knows the effect the Chapel can have, and it is well known that it can even ruin concerts. Those who truly understand the reverberant acoustic space are usually the ones wielding its power, but due to having their own soundboard operator, they performed sans Larry Darling, Director of Recording at the Conservatory. This resulted in prominent lows and a generally muddied sound, a disappointment compared to the clarity and walls of sound that make up the recorded version of “Partita.”

The other factor was that the first alto, tenor, baritone and bass-baritone were all substitutes. It was clear they were not incapable of the parts, but from beginning to end, their sound and energy felt off, even slightly unfocused sometimes. It was not until a few days after the concert—right as I began writing this—that I learned about the substitutes, but I am glad it came to my attention as it answered my questions about blend and shared mindset.

The source of most of my confusion and discontent was the expectations I had for this performance. Even before this most recent one was announced, I had heard many instances of high praise for their 2014 concert. Many friends claimed it was one of their favorite concerts at Lawrence, and this—in conjunction with hearing a few professors talk about the 2014 show and the group in general—understandably caused a great deal of excitement in me. But it is strange what expectations can do. As the performance went on, my thoughts on the ensemble were tried and became—for the most part—negative. These conflicting emotions were difficult to feel; I wanted to enjoy it, but felt I could not.

Before knowing about the substitutes and discussing the sound with others—before having time to think much about it—I sat in the Chapel not sure what to feel. I cannot recall any other concerts like this—ones I wanted to resonate with, but was unable to due to reasons I could not quite put my finger on. While my thoughts were swirling during the performance, nothing was that concrete, merely leaving various details open to set off my negative reactions. A large part of my initial negative response had to do with the two newest pieces, Ted Hearne’s “You are not the guy” and Brad Wells’ “Kalief Browder.” It is also worth noting that these pieces were the only two new ones added to the program from their last Lawrence visit, a small detail, but the more I think of it, the more I wish they had varied their program, even though I was not at the 2014 performance. Friends that attended both concerts, neither, or, like me, one, agreed that a fresher repertoire would have been ideal.

Again, I learned about the program similarities after the fact; my main unsettlement came from the pieces’ subject matter and how they were performed. Both dealt with race, but in ways that seemed preachy, forced and lacking substance. Although I appreciate that privileged composers are sharing awareness about racism through their music, the fact that eight white vocalists were singing compositions by white composers about a black victim or black experience left a weird taste in my mouth. On the one hand, I was glad they were taking a stance through art, but on the other hand, I felt they did little beyond sharing the fact that it is a bad thing that happens. Because of prior knowledge and the program notes, I was expecting more sensitivity, but it was not delivered.

It is not easy for me to write a negative review, but even from this concert positive things can be gleaned. I am grateful that my experience with Roomful of Teeth forced me to continually confront my conflicting feelings throughout and afterwards.

Roomful of Teeth perform in Lawrence Memorial Chapel. Photo by Angelica Hurtado. Occasionally, I will see a concert I am to cover and leave able to appreciate it, but other than that, feel little else. This can be due to a plethora of reasons, some known immediately, some still not figured out and some in…