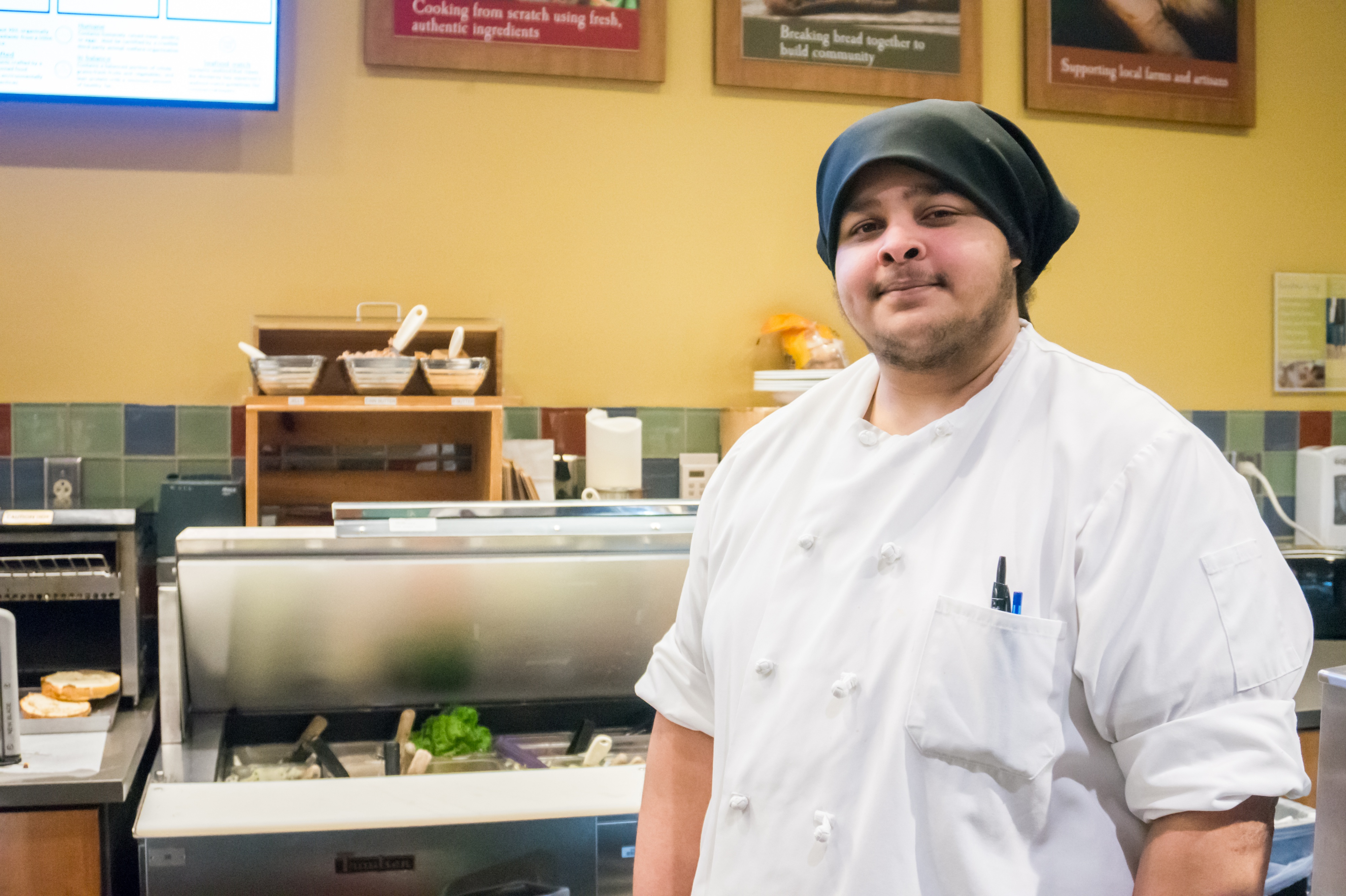 Mason Baez standing next to the bagel station in the cafe.
Photo by Larissa Davis.

You may simply know him as the “Bagel Guy,” but Mason Baez’s position making bagels and hot pressed food in the cafe is only one side to a man with many interests and talents. Baez has been working for Bon Appetit since April of 2016. Before making his way to the café, he was a cook in the pizza kitchen and back kitchen as well as a dishwasher with Bon Appetit. Baez is quite experienced in the restaurant business, having also worked as a host at Glass Nickel Pizza Co. and a dishwasher at Galvan’s Restaurant before coming to Lawrence.

Regarding his current position at the bagel station in the café, Baez said, “I’m usually more than willing to lend a hand to co-workers in need.” Baez’s favorite part about working at Lawrence is each interaction he has with the staff and students, which make the day fly by. When he is not behind the café counter, Baez has many interests that keep him busy outside of the workday.

“My free time is spent taking what the day throws at me,” Baez said. He likes to spend his free time doing many different things. Among the grocery shopping and taking road trips to ‘aimless destinations,’ Baez said he also enjoys spending time with his girlfriend and furthering his love of music.

“Ever since I was a young child, I’ve had a love for music,” Baez said. That musical passion never faded away, and now Baez has a large inventory of instruments, including an electric guitar, electric bass guitar, acoustic guitar, a didgeridoo, bongos and a mini keyboard. Baez has also built his own vocal booth from scrap wood and is working on music production, something he has recently started to prioritize in his daily life.

As Lawrence students will understand, it is not uncommon to be multi-interested and multi-talented. Beyond music, Baez loves art, particularly drawing and painting. He also loves to learn about vintage vehicles and engines. Baez recalled, “It all started when my grandfather let me drive his riding lawnmower at the age of five. As soon as he wasn’t looking, I caught the need for speed.” He began building pre-70s GM motors with his father shortly after and together, they worked to fully restore a 1967 GTO Hardtop as well as a 1965 and a 1966 Ford Thunderbird.

Lastly, Baez says he has a love of nature. Whether it is going for walks or bike rides, Baez said, “Being outside in general is beneficial for my own sanity.” In his adventures in the outdoors, he has gone to see the largest waterfall in Wisconsin and has climbed the lofty bluffs of Devil’s Lake State Park. Unfortunately, after a recent broken ankle and a severe car accident shortly after, he has struggled with regaining his full mobility. Baez has stayed positive, however, and assured “Over time, I have progressed, as time heals all things.”

With so many hobbies and hidden talents, it is no surprise that Mason Baez has made it on the Lawrentian’s Hidden Figures list. Baez’s role as the “Bagel Guy” at Lawrence is just one of the many roles he assumes on a given day. When asked what his big plans are for the future, Baez responded, “My biggest plan is to live my life as much as I can.” Baez simply wants to ensure that he and his girlfriend are happy and enjoying life. So, if you see the “Bagel Guy,” be sure to say hello, ask him about some music and remember to thank him for being a valued member of the Lawrence community.

Mason Baez standing next to the bagel station in the cafe. Photo by Larissa Davis. This column is devoted to highlighting staff members that play a huge role in the everyday experiences of the Lawrence community. The goal is to focus on the “Hidden Figures” of Lawrence University and their interests both within, and outside…