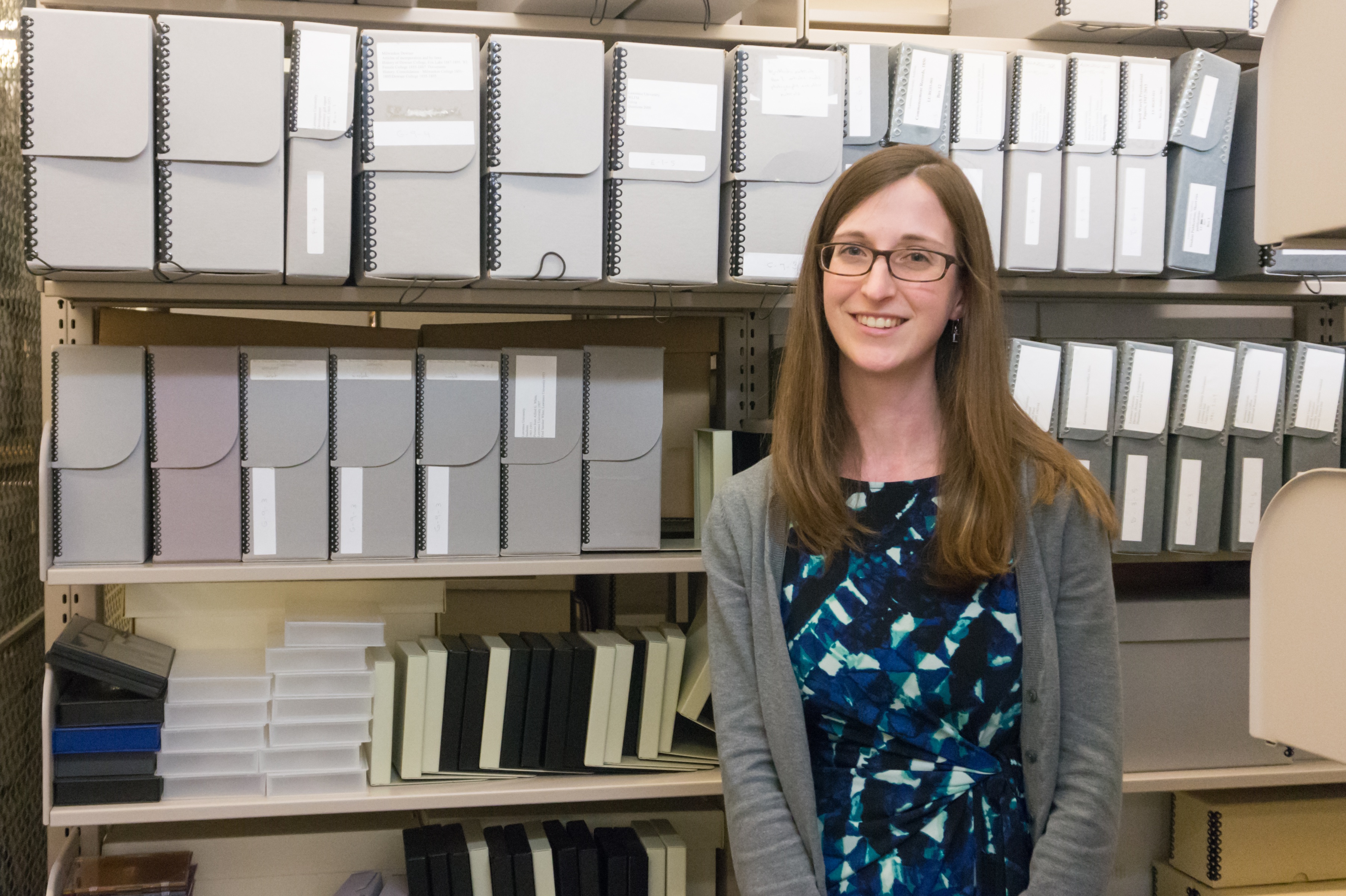 Erin Dix stands in the University Archives on Level B in the Seeley G. Mudd Library.

There are many staff members that play critical roles in the current operations of Lawrence. However, one individual on campus has gotten the opportunity to engage with the university from the moment Lawrence was charted in 1847 to the present day. Erin Dix, the Lawrence University Archivist, oversees all archives at Lawrence’s Seeley G. Mudd Library. Dix is also a reference librarian, but most of her time at Lawrence has been devoted to managing the vast collections that make up the archives and teaching people about the history of Lawrence University.

An alumnus of Lawrence herself, Dix started working as the University Archivist in 2010. Dix graduated from Lawrence with a Bachelor of Arts in History and went on to get her Masters in Library Studies at the University of Wisconsin, Madison.

Since 2010, Dix has worked to form a complete database of the Lawrence archives. “You learn all sorts of random [things] about Lawrence history doing this job,” she said. Dix’s job also includes helping students and classes work with the collections as well as answering any questions that people may have pertaining to the archives.

The earliest records in the Lawrence Archives are from the founding of Lawrence in the mid-1840s. The collection also contains the archives from Milwaukee-Downer College. This all-women school was consolidated with Lawrence College in 1964 to create Lawrence University. Milwaukee-Downer records prior to the 1964 consolidation have been integrated into the archive collections and remain a unique aspect to Lawrence history. Dix describes the consolidation as the merging of two histories, which has created an even bigger and richer history.

Most of what Dix manages are of text documents and photos, along with many recordings of Conservatory recitals. According to Dix, records come to the Lawrence Archives through various campus offices, but many are also donated by current students, faculty and staff. Alumni have also donated letters and photos back to the University Archives after many decades.

Another part of Dix’s job is to document present-day Lawrence for the future. The Lawrentian is one of the digitally archived documents that is currently being archived for the preservation of current news and events.

Dix said that the preservation of current archives can be challenging given our current society and its communications norms. Records like students’ diaries and scrapbooks, which gave a sense of daily life many decades ago are now being replaced by mainstream media platform posts, which take a different form than traditionally archived documents.

In her free time, Dix says she enjoys reading, as well as playing piano and clarinet. Dix also spends her free time with her husband and their beloved fluffy cat.

As the overseer of the past, present and future of Lawrence, Dix plays a very important role on campus. Though she may be hidden away in the B Level of the Library, her passion for history and the Lawrence collections has allowed students to learn about Lawrence’s past while they contribute to its future. Erin Dix certainly makes her mark on Lawrence history, making her another great example of the many Hidden Figures on the Lawrence campus.

Erin Dix stands in the University Archives on Level B in the Seeley G. Mudd Library. Photo by Larissa Davis.   This column is devoted to highlighting staff members that play a huge role in the everyday experiences of the Lawrence community. The goal is to focus on the “Hidden Figures” of Lawrence University and…