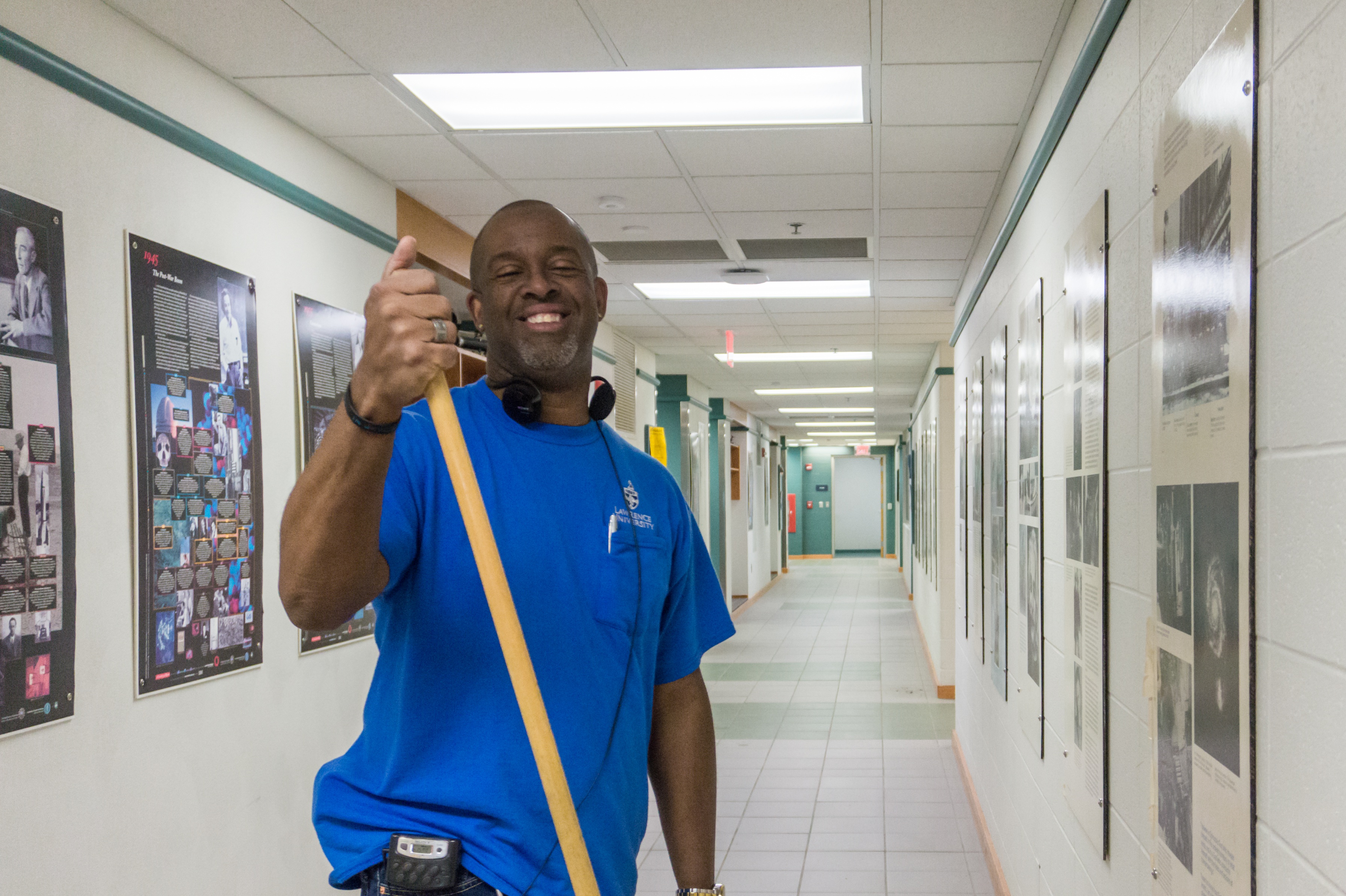 A typical Lawrence student may start their morning once the sun has come up, doing some last-minute reading or stopping at the café for a quick coffee before class. But by the time 8:30 a.m. classes are in session, Rodney S. Watkins has already been at work for almost four hours. Watkins is just one of the many campus custodians, responsible for cleaning and maintenance across campus. Watkins’ workday begins around 5 a.m. when he arrives at his office on the second floor of Youngchild Hall.

Watkins spends the morning cleaning and overseeing Youngchild Hall, which houses the physics, geology and biology departments. He may also be called to fill in or help with other halls or buildings on campus. The Lawrence custodians work year-round to keep Lawrence running, even during summer, winter and spring break. Watkins has been working as a custodian at Lawrence for about fifteen years, and he says that the best part of his job is working with his coworkers and interacting with staff and students.

Because Watkins comes to work at 5 a.m., he leaves around 1:30 p.m. After work, the rest of his day is full of chores at home and getting dinner ready for himself and his wife. On days when he is not too tired after work, Watkins enjoys bike rides around his neighborhood or to City Park. When the weather is nice, he also likes to bike to work, or go for walks or a light workout, although he says that he gets plenty of exercise during his work day.

On his vacations, Watkins says he and his wife like to go on trips and get away. Although he has two sons in their early twenties, he said, “Usually it is just me and my wife.” Most recently, he and his wife took a trip to Chicago to meet up with his parents, and they are looking forward to a trip in August to Washington D.C.

Watkins says that his faith is a big part of his life outside of Lawrence. He and his wife go to church and he reads the Bible often. Watkins said, “I’m Baptist, so I pretty much try to keep close to that.” Family is also very important to Watkins. His two boys are 20 and 23.

“They grow pretty fast,” Watkins reflected. Both of his sons live with him and his wife. His younger son is still in school, and his older son is looking for a place of his own. Watkins is looking forward to having his kids out of the house. “Pretty soon they’ll be out, so actually I can’t wait for that!” he laughed.

When asked how he defined the ‘Lawrence Difference,’ Watkins simply responded, “Spring.” As people are getting ready to graduate and go on with their lives, Watkins said, “I think [students] have a little more pep in their step because they know that school is about to [be] done.” He says that he can see and hear the excitement.

Watkins says that the custodians look forward to graduation as much as the students do., Watkins commented, “We are in such a routine that we get excited when it approaches, too. We get ready for graduation, and we get the buildings prepared and all that jazz. It’s getting closer and closer, so you can kind of tell. At this time, you can feel it; we’re just getting ready.”

As spring comes into its full swing and the weather gets warmer every day, the excitement of the end of the year and graduation seems closer than ever. Among studying for midterms and enjoying some time outdoors, remember the many custodians on campus that keep Lawrence running every day, and all year long. Be sure to thank those ‘Hidden Figures’ when you see them and wish them a happy spring while you’re at it!

Lawrence Custodian Rodney Watkins proudly stands on the second floor of Youngchild Hall. Photo by Larissa Davis. This column is devoted to highlighting staff members that play a huge role in the everyday experiences of the Lawrence community. The goal is to focus on the “Hidden Figures” of Lawrence University and their interests both within,…