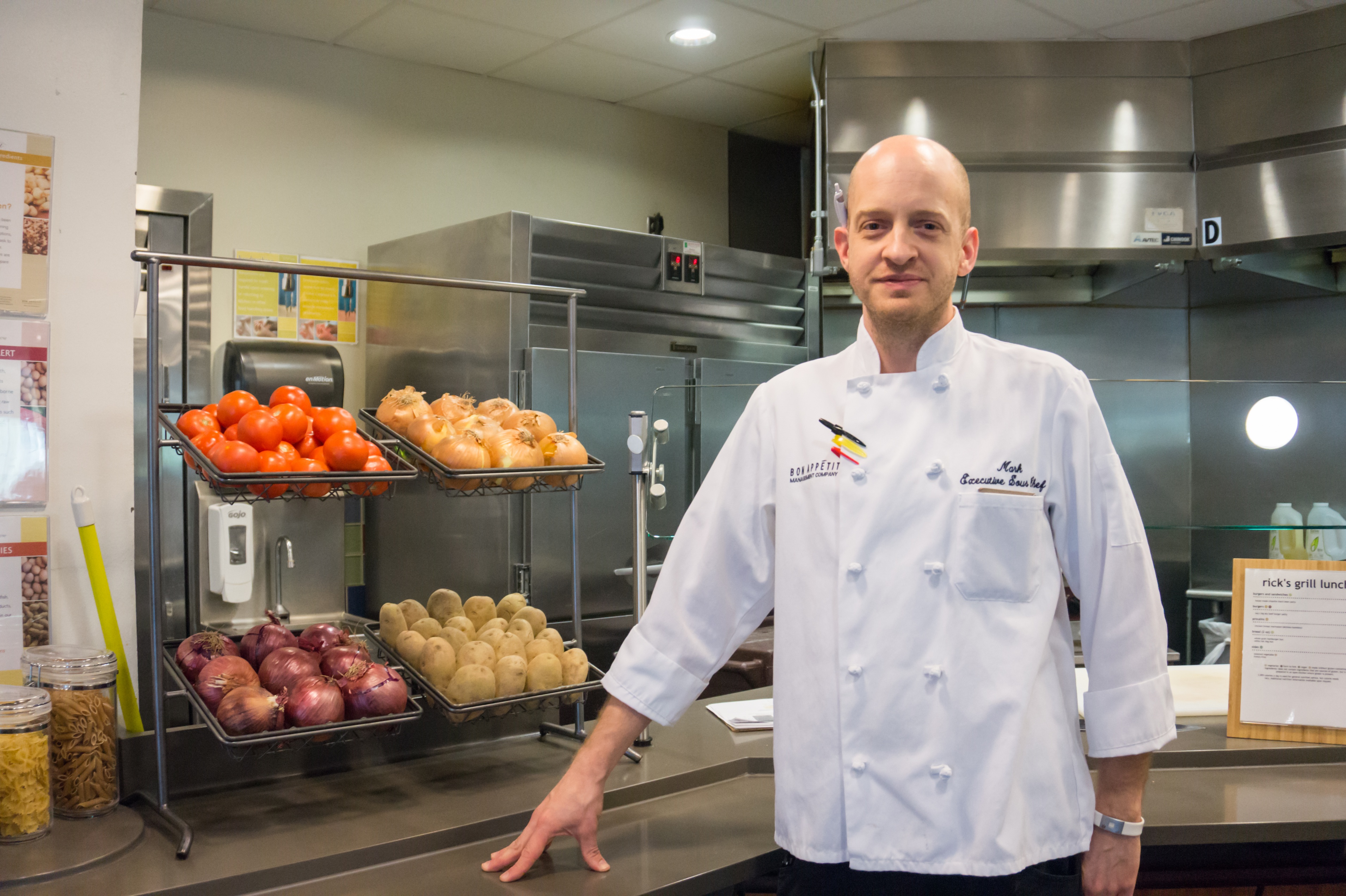 Executive Sous Chef of Andrew Commons, Mark Biesak, posing in the Commons near the “Eat at Ed’s” line.
Photo by Larissa Davis.

While sitting in the Andrew Commons on Taco Tuesday, many students don’t think about exactly how the food found its way onto their plates. Of course, it was dolloped-on by a Bon Appetit employee, but its conception began in the kitchen.

As hot food is rolled out and dirty dishes are brought in, the kitchen is constantly moving and producing for the hundreds of students at Lawrence. Mark Biesak, Executive Sous Chef for Bon Appetit, oversees all of the day-to-day goings on in Andrew Commons; a role which takes creativity, teamwork and a consistently positive attitude.

As Executive Sous Chef, Biesak manages the sous chefs, lead cooks and cooks on staff who prepare and cook the meals in the Andrew Commons kitchen. With around 100 culinary employees, Bon Appetit is quite a large operation, complete with a multitude of separately moving parts. Biesak’s position allows his job to be ever-changing. He may assist on the cooking line, manage the cooks and chefs in the kitchens or create new programming and ideas for food stations within the Commons.

Biesak came to Lawrence about a month after Warch Campus Center opened in 2009. He had previously been working as Executive Chef at a resort, a relatively prestigious position in the culinary world. Biesak was hired by Bon Appetit as a Lead Cook in Kaplan’s Grill and climbed the ladder Executive Sous Chef in the Commons.

Biesak has been cooking for since he was thirteen years old. “It’s all I’ve really ever done,” he commented. Biesak has always loved the comradery and excitement behind cooking. His favorite part of his position as Executive Sous Chef is being able to manage a large team of people and use problem-solving skills and creativity within the kitchen.

Forming new recipes and ideas for stations is a part of Biesak’s job. He said that working with the talented and passionate group of people in Andrew Commons allows him to take pride in the quality of food going out, while investing time into new ideas for food stations and recipes.

Biesak has been managing as an Executive Sous Chef for the last four to five years, and although he spends time in the kitchen, much of his time is spent writing out schedules, crafting menus or developing new ideas for Andrew Commons. Biesak said, “Right now I have a phenomenal staff that need very little assistance. So, if all of my people are here, if all of my positions are filled, and all of my people are highly competent in what they do, then more of my time is spent managing the cooking.”

Biesak said that one great thing about working in the Andrew Commons is that all chefs and cooks have some amount of freedom in culinary experimentation. Biesak shared, “[The kitchen staff] have the freedom to just be creative, which is one of the reasons why we are able to attract such good candidates here; they are not just standing on a line, cooking the same thing day-in and day-out.”

Although Biesak says he has no particularly favorite food to cook, he enjoys making fresh pizza in his outdoor ceramic cooker. Biesak uses homemade dough made with Italian flour, as well as San Marzan tomatoes, which results in a really good quality pizza.

“I love the atmosphere of a kitchen,” Biesak said about Andrew Commons. “I love that regardless of whether or not you have your name on your coat or what your position is, the door has to open at 11 a.m. for lunch. Everybody has to do what it takes to make that happen. There is a lot of short-term stress, and then we all figure it out, and [the door] opens at 11a.m. and no matter what, it closes at 2 p.m. So every day, sometimes twice a day, you get these short-term victories.”

“To me,” Biesak said, “the Lawrence Difference is the opposite of everything that I’ve ever done at this point. It’s working in a beautiful building; working with genuinely good people who are super dedicated. I would say that both the Lawrence community and the Appleton community are just an awesome thing to be a part of. This community here is different, and so that is the difference for me.”

When Biesak is not running the Andrew Commons kitchens, he enjoys spending his time with his six-year-old daughter. Biesak shared, “Any time I’m not at work, I’m doing stuff with her, [and] she has just recently started to get involved in the kitchen. Every night, if I’m home, we’ll pick out what we’re cooking and get all the ingredients ready, so it’s great.”

Biesak is also getting married to his fiancé in June, and enjoys traveling with his family. “Anything travel-related or exploring or trying new foods or ice cream is kind of our thing,” he said.

Although he would like to get back into some past hobbies, Biesak said that whatever he is doing, he wants to be doing it with his daughter and his fiancé. “Before I had a daughter, before I was engaged, I would work two to three jobs. I would fill my days with endless amounts of work, because I enjoyed doing it and at that time, my family was the people I worked with. Now, I love what I do here, but I love getting home and spending time with them,” he commented.

Thanks to the endless hours that Biesak commits to managing Andrew Commons, as well as the many kitchen staff who make the food, students never have to worry about where their next meal is coming from. That first bite at dinner should remind you that someone has made that taco masterpiece possible.

Executive Sous Chef of Andrew Commons, Mark Biesak, posing in the Commons near the “Eat at Ed’s” line. Photo by Larissa Davis. This column is devoted to highlighting staff members that play a huge role in the everyday experiences of the Lawrence community. The goal is to focus on the “Hidden Figures” of Lawrence University…