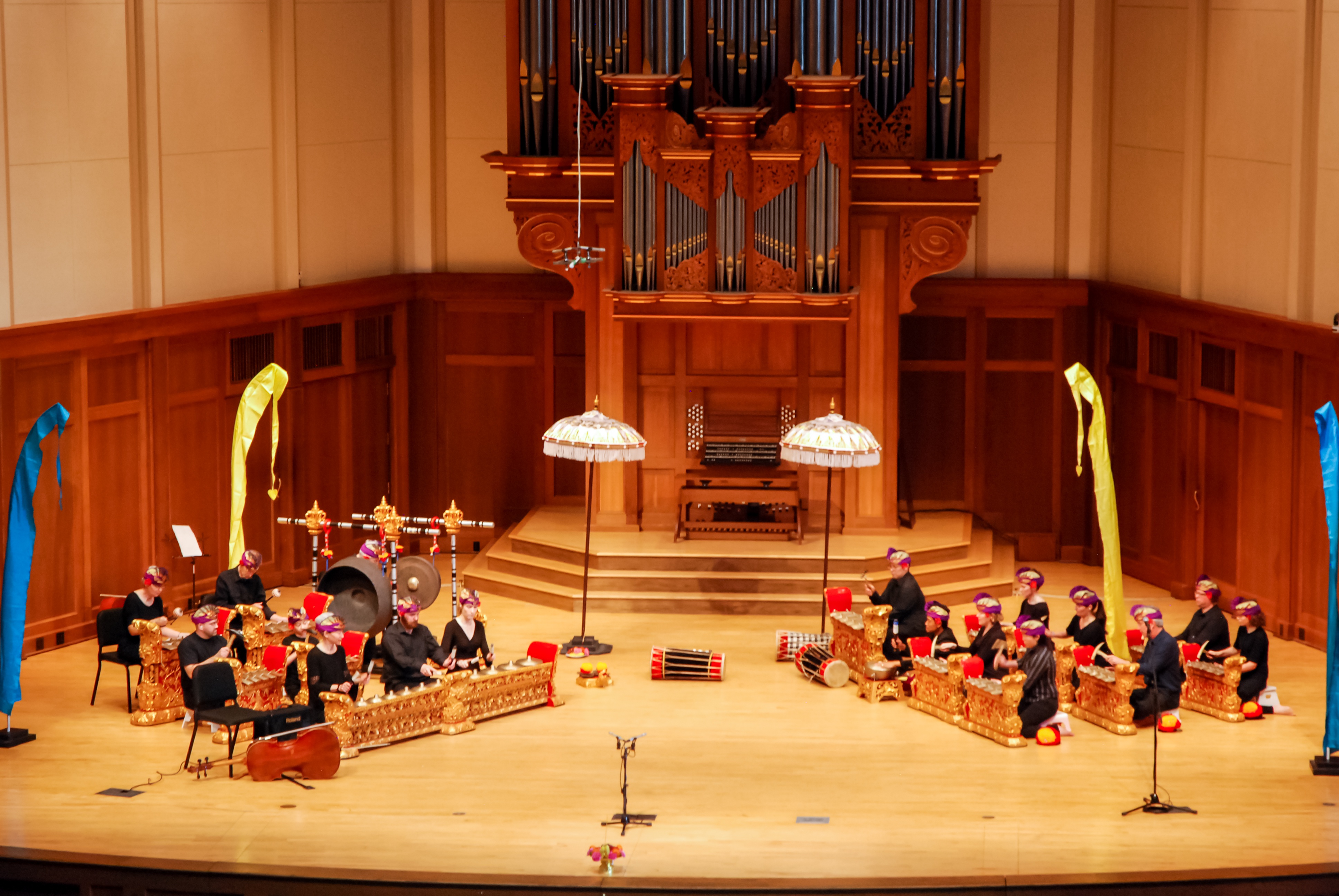 Gamelan performs in the Lawrence Memorial Chapel.
Photo by Hikari Mine.

On Sunday, May 21, the final Balinese Gamelan Concert of the year took place in the Lawrence Memorial Chapel. Two gamelan groups performed that afternoon: the Gamelan Sekar Kemuda group, which is open to members of the Appleton community, and the Gamelan Cahaya Asri group, which is comprised of Lawrence students. Lecturer of Music and Director of the Gamelan Ensemble, I Dewa Ketut Alit Adnyana, performed alongside both groups. The music ranged from traditional ceremonial pieces to modern compositions written by Dewa himself.

As soon as Gamelan Sekar Kemuda entered onto the stage, they bowed to the audience and the concert began. Before and after each song, the performers waved their hands and instruments in a ceremonial manner. The red and gold gamelan set was exquisitely beautiful; each instrument had ornate decoration. The percussive sound of the instruments was often hypnotizing. The audience was told that gamelan music is usually performed outside in a loud, open setting, so the announcer said it was fine to let young kids run around and dance during the performance. Because of this, the atmosphere was very lighthearted and casual—very different from the quiet formality of many Chapel concerts.

The remainder of the concert was performed by the student group, Gamelan Cahaya Asri. Their first few songs were traditional ceremonial pieces. Many of the pieces started with one instrument playing a simple and unembellished melody; after the melody was repeated once or twice, the remainder of the instruments joined in. The interplay between rhythms of different instruments was fascinating. It is also worth noting that no performer learned using sheet music. Some of the performers seemed to be in a deep state of calm relaxation, while others were livelier and danced as they played.

During the more contemporary songs, different performers were featured. “Hujan Mas,” by I Wayan Gandera featured only three performers instead of the usual 22. Two of the performers played synchronized harmonies while Dewa kept a pulsing rhythm. Another trio piece, “Purwa Pascime,” by I Wayan Beratha, had a beautiful cello melody. The last song was “Kecak dance,” a 20th century performance piece. The entirety of the Gamelan Cahaya Asri group reappeared and they sang and danced around the stage. Dewa would yell out and the rest of the group would chant back to him. The group sat and rose in unison and much energy and passion was exhibited all around.

This last World Music Series concert for the 2016-2017 school year was an extremely enjoyable experience. The audience was repeatedly reminded that they can join one of the two gamelan groups next fall, even if they have only a little musical background. Students were reminded that there is still time to register for the gamelan course on Voyager and all students are encouraged to join.