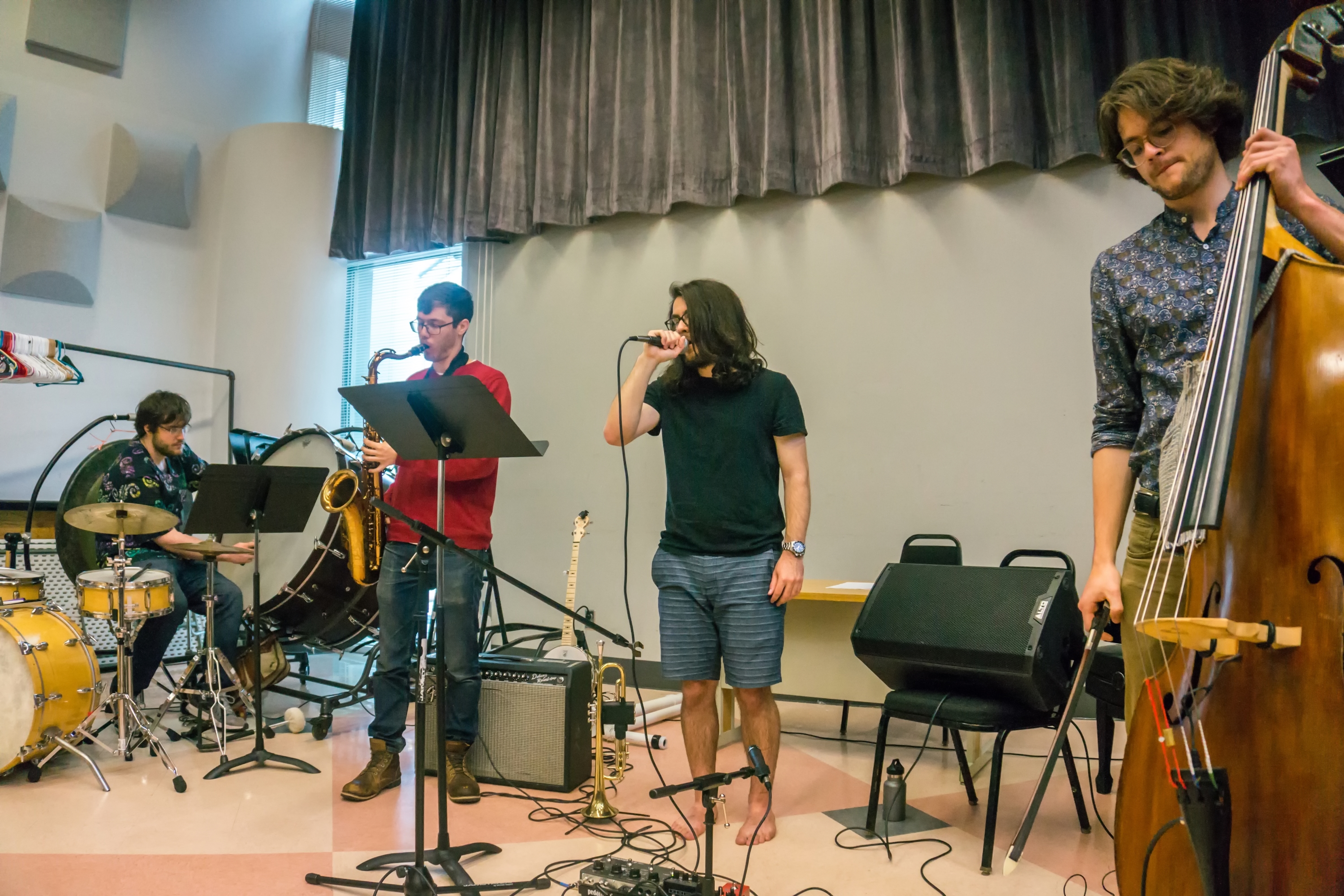 On Saturday, May 20, junior Izzy Yellen invited friends from all around to attend his event, titled “Unencumbered,” in room 156 of the Shattuck Hall of Music. The event was all about the light-spirited, unencumbered feelings associated with true creative expression.

Yellen is a junior pursuing a philosophy major and a creative writing minor. He is also a multi-instrumentalist and is interested in deep listening and contemporary improvisation.

“Unencumbered” was comprised of original stories, reflections, compositions and improvisations from Yellen. He began working on the program early this year, collecting his favorite ideas and most meaningful writings. Many of the featured works are only a few months old. He collaborated with many of his closest friends and creative partners to bring each piece to life.

The program began with a reading from Yellen’s “on creativity,” a look back at his earliest experiences writing in elementary school and the powerful act of encouraging a young artist: “I wanted to quit at that point because I did not understand beauty…years later I thank everyone and everything that pushed me to continue.” Yellen read the entire piece in monotone and without pause. The delivery was calming to the ear but nerve-racking if you really listened; it amplified the themes of tense, frustrated creative energy in the story.

After the reading ended, Yellen joined his group called “about the project.” that included senior Sam Genualdi on lap steel guitar, junior Emmett Jackson on bass and senior Jason Koth on electronics. The four took the essence of the story and used it as a seed for an expansive group improvisation. The instruments’ voices merged to form an ambient soundscape made of reverberating fragments and soft synth pads climbing higher and higher in register.

Then, a group of roommates known as the “The Mazel Quad,” consisting of Yellen with spoken word and seniors Miles Allen, Adam Friedman and Jacob Heinemann on saxophone, percussion and bass, respectively, performed “improvisation in A major based on a dream from 5/5/2017.” As Yellen read his dream story about a boy and girl discovering a crumbling concert hall, the rest reacted to the words with melodies and sound effects matching in intensity.

Next, Yellen grabbed his banjo and joined the rest of his trio—sophomore Spencer Tweedy on bass guitar and senior Adam Friedman on percussion—to play “Vacation,” a song they wrote together. While they played with so much energy that it was hard to hear the lyrics Yellen sang, this piece served nicely as an interlude between the other heavier works.

For the final spoken word piece on the program, Yellen read from an untitled piece of his while senior Matt Blair created a soundtrack on piano. Elements of Blair’s playing were recognizable from his earlier performances, but most of them were improvised to match the mood of the text. For this deeply personal piece, Yellen articulated some of his feelings about the nature of writing and his artistic inspirations. He mentioned Philip Glass, David Foster Wallace, and Spalding Gray. He called this recital “a culmination of what I listen to and read.”

To close, the audience was invited to stand up and participate in a group sonic meditation led by Yellen and other members of the Deep Listeners of LU board. Together, they read a text score and gently prompted audience members to participate.

Junior Izzy Yellen performs with friends in Shattuck Hall of Music. Photo by Taylor Blackson. On Saturday, May 20, junior Izzy Yellen invited friends from all around to attend his event, titled “Unencumbered,” in room 156 of the Shattuck Hall of Music. The event was all about the light-spirited, unencumbered feelings associated with true creative…