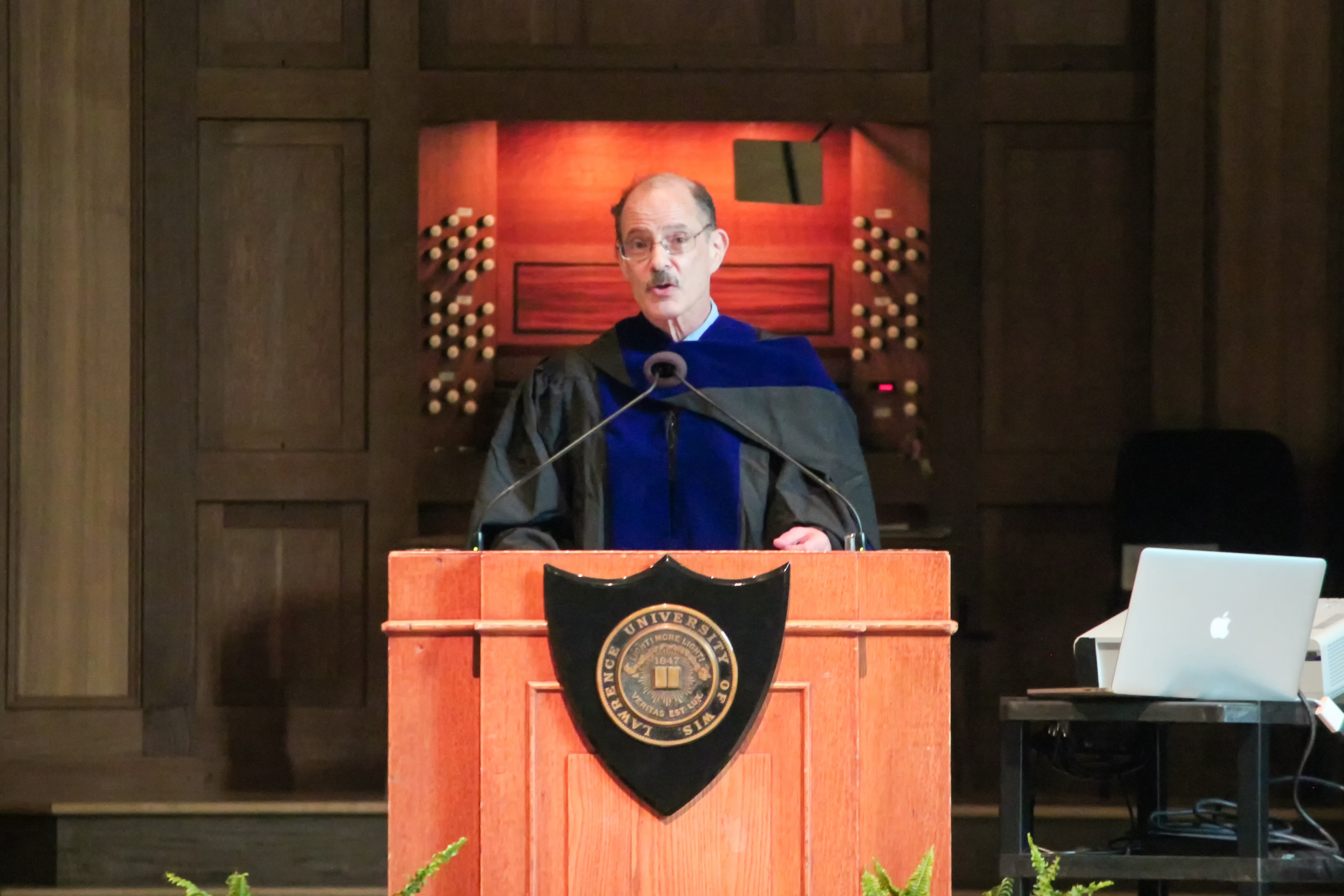 Lawrence University held its annual Honors Convocation on May 23, 2017 from 11:10 a.m. to 12:30 p.m. in the Memorial Chapel. Professor of History and Patricia Hamar Boldt Professor of Liberal Studies Paul Cohen gave the address titled, “Presidential Manhood: Masculinity and American Politics in the age of Mass Media.” The event also honored students and faculty who received awards at the annual awards banquet held on Monday, May 3 and recognized students newly elected to honors societies.

The opening music for the event included a Prelude performed by Professor of Trumpet John Daniel and Lecturer of Music and University Organist Kathrine Handford. It was followed by a faculty procession into the Chapel with faculty members dressed in their academic robes and caps.

Cohen began teaching history at Lawrence in 1985. He received his B.A. in history from Clark University, and his M.A. and Ph.D. in history from the University of Chicago. Professor Cohen’s address centered on the history of masculinity and image in American politics. He proposed that onscreen masculine performance played a larger role in the 2016 election than has previously been recognized. Working within the framework of Judith Butler’s definition of gender as a cultural and historical construct and Raymond Williams’ observations about totalizing effect of mass media, Cohen characterized perceived rules of masculinity in politics. They included the importance of establishing masculinity through decisive action and willingness to use military force and avoiding an overeducated, indecisive or feminine appearance. They also included projecting the image of a “regular guy” and that an image, rather than feats associated with the masculine, is most important. Cohen illustrated each point with historical figures and elections such as the 1840 presidential election between William Henry Harrison and Martin Van Buren, the 1988 presidential election of George H. W. Bush versus Michael Dukakis, the presidency of George W. Bush and Barack Obama, and the 2016 presidential election between Hillary Clinton and Donald Trump.

Cohen also underscored the development of the “Cowboy Myth,” in which empathy and compassion were seen as a shortcoming. Professor Cohen noted how qualities associated with boyhood, such as impulsiveness and irrationality, that were previously looked down upon became essential in the construction of “passionate manhood.” He illustrated the qualities associated with “passionate manhood”—courage, indomitable will, impatience and combativeness—in reference to Theodore Roosevelt. Cohen finished his address with an analogy to the Allegory of the Cave from Plato’s work, The Republic, drawing connections between political images in mass media and images projected onto the walls of a cave.