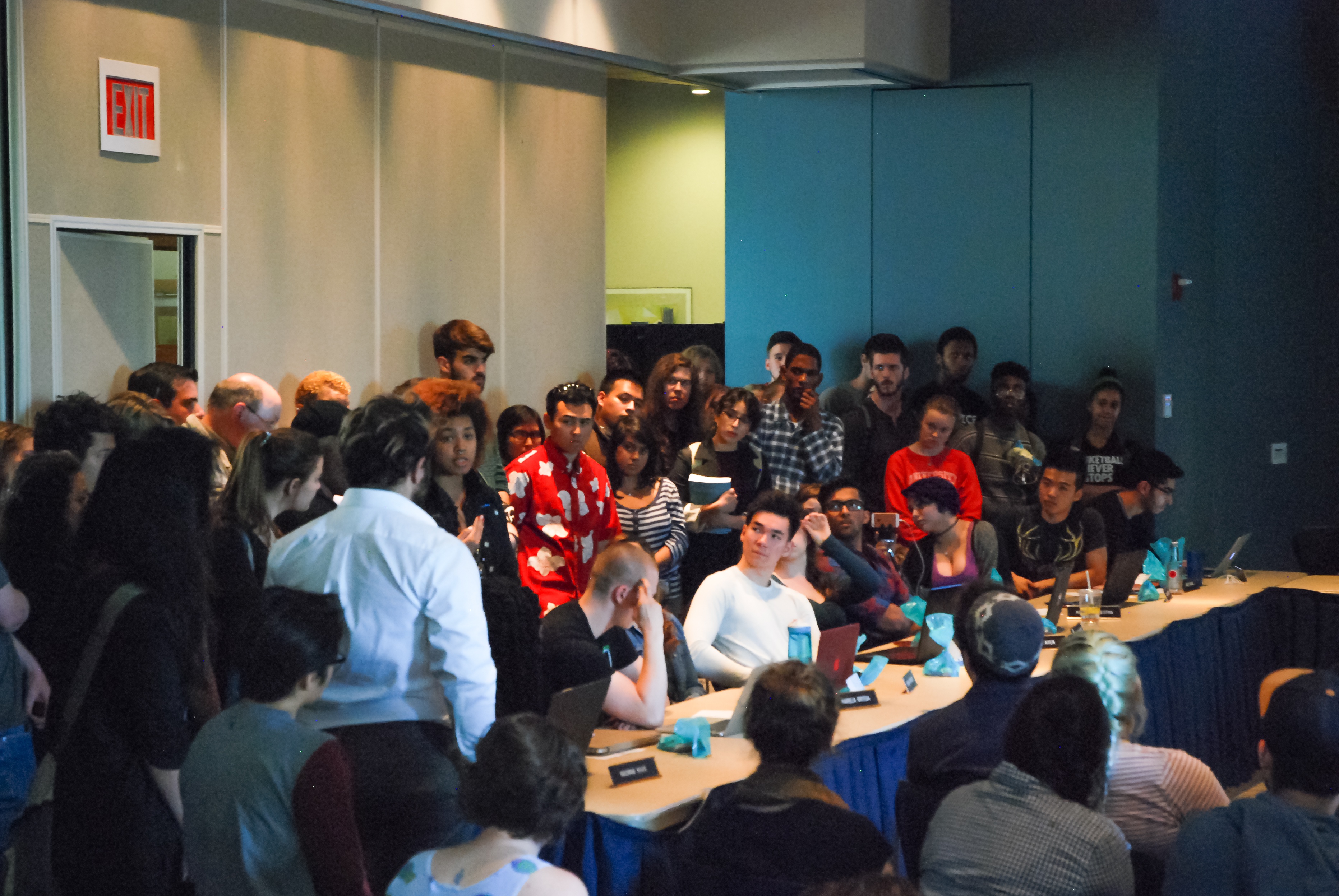 Students crowded all available space in the Mead Witter Room.

Reporting contributed by The Lawrentian Editorial Board

On Monday, May 22, many Lawrence students gathered in the Warch Campus Center’s Mead-Witter Room for the last LUCC General Council meeting of the term. The unusually large turnout was fueled by the presence of the Students for Free Thought (SFT) group after their controversial film screening last Wednesday. During the General Council meeting, many students voiced concerns regarding the SFT group and last Wednesday’s event.

When more than one hundred Lawrentians showed up, a Consent Agenda was voted on and passed as a whole. This was to ensure LUCC devoted more time to listen to students who had come to speak about SFT. The meeting lasted over three hours, much longer than a typical General Council meeting that takes sixty to ninety minutes. Before the floor opened to discussion, LUCC projected the Steering Committee’s minutes recommending denial of recognition to SFT. This recommendation was approved by the council immediately after introduction.

SFT had met with Steering Committee prior to Wednesday night’s film screening and had been placed on a trial period, with recommendations of actions to take to achieve club recognition. By Monday’s General Council meeting, SFT reportedly had not followed through with many of these recommendations, including collaborating with other groups and finding a neutral moderator. In addition, SFT was denied LUCC club recognition for several other listed reasons. These include the group’s decision to keep its members anonymous, which goes against the open and public nature of LUCC student organizations, the similarity of the group to other on-campus organizations, the broad and contradictory mission statement of the group and the broad membership guidelines which could lead to subjectivity regarding who can and cannot participate in the group.

After announcing the decision, LUCC President Lewis Berger opened the floor to discussion. He emphasized a ‘one mic’ precedent and welcomed productive discussion. As the decision to deny the group recognition had already been made, LUCC members, at multiple points, urged students at the meeting to talk about ways to change legislation and move forward as a community. However, many students felt the need to express their concerns surrounding the decision and the events of the past week.

Freshman and SFT co-founder Chris Eichorn read a letter from a student who identified themselves as part of SFT and as a queer person of color, but preferred to keep their identity anonymous. This member spoke in favor of the club and noted its importance on the Lawrence campus.

In response to this, junior Sabrina Conteh validated the experiences of the anonymous member of SFT and noted that one queer person of color did not speak for all marginalized persons. Recounting the events of Wednesday night’s film screening, she reported that two members affiliated with the club, freshman Chris Wand and junior Jacob Berman, verbally assaulted her. Conteh reported that Berman was drinking publicly in an academic building while Wand filmed her without her consent. She also expressed disappointment in the staff members present in the screening room for not taking action against a student drinking in an academic building.

Junior Selena de Leon chimed in with her account of the screening and reported that a leader of SFT grabbed her arm when she attempted to stop him from filming Conteh. De Leon vocalized concern that her report of the unwanted physical contact had not yet been processed, and spoke of her fear to walk around on this campus even after investing so much time and money in her Lawrence education. Following comments by Vice President for Student Affairs Nancy Truesdell, De Leon later expressed feelings of invalidation that the administration was unwilling to accept that a Lawrence student was involved in assault.

SFT co-founder Chris Wand expressed concern that his group had been denied recognition due to political bias against them. He admitted they could have handled things better, but said he reached out to Vice President for Student Life Nancy Truesdell and had not received a response. Wand claimed, “You [LUCC] are not letting us have our club because you politically disagree with us.” Berger, in response, directed Wand back to Steering Committee’s notes, which pointed to the club’s failure to meet the committee’s recommendations.

Discussion was then steered towards how LUCC could change the structure of the trial period granted to clubs. One suggestion was that at least one class representative should be required to be present at and authorized to shut down all major events of a club which is on a trial period. This was followed up by a point of mandating class representatives to be bystander intervention trained. Another suggestion was to have a caucus of school officials and students that Steering Committee can refer to be responsible for the moderation of potentially disruptive events.

The discussion got heated as a student from University of Wisconsin-Milwaukee started speaking in favor of SFT. After an opposition to her remarks was raised by a Lawrence student, Berger established that the meeting was first and formost for the Lawrence community to voice their concerns. The UW- Milwaukee student, as well as members of SFT, left the meeting, seemingly in protest. After this, members of SFT and the UW- Milwaukee student reportedly expressed concerns about possible racial bias against them.

Towards the end, Residence Life Committee Chair and junior Dan Thomas-Commins came up with a recommendation for the council to amend Article One of the Constitution to include a commitment to “work purposefully toward dismantling all structural, institutional, cultural, and internal forms and manifestations of oppression, colonization, discrimination, bias and bigotry against marginalized groups and individuals on and off campus.” The resolution was discussed and put out until next year to be approved by the council and student body.

As the meeting came to a close, some students continued to voice concerns about the way Lawrence handles problems of diversity and asked for improvement. The meeting concluded with Berger reiterating LUCC’s commitment to students’ feedback and to being a resource for the community.

President Mark Burstein sent out a statement to the Lawrence community before Tuesday’s convocation addressing LUCC’s decisions and the efforts Lawrence hopes to make in improving the ways they handle these situations.

Students crowded all available space in the Mead Witter Room. Photo by Hikari Mine. Reporting contributed by The Lawrentian Editorial Board On Monday, May 22, many Lawrence students gathered in the Warch Campus Center’s Mead-Witter Room for the last LUCC General Council meeting of the term. The unusually large turnout was fueled by the presence…