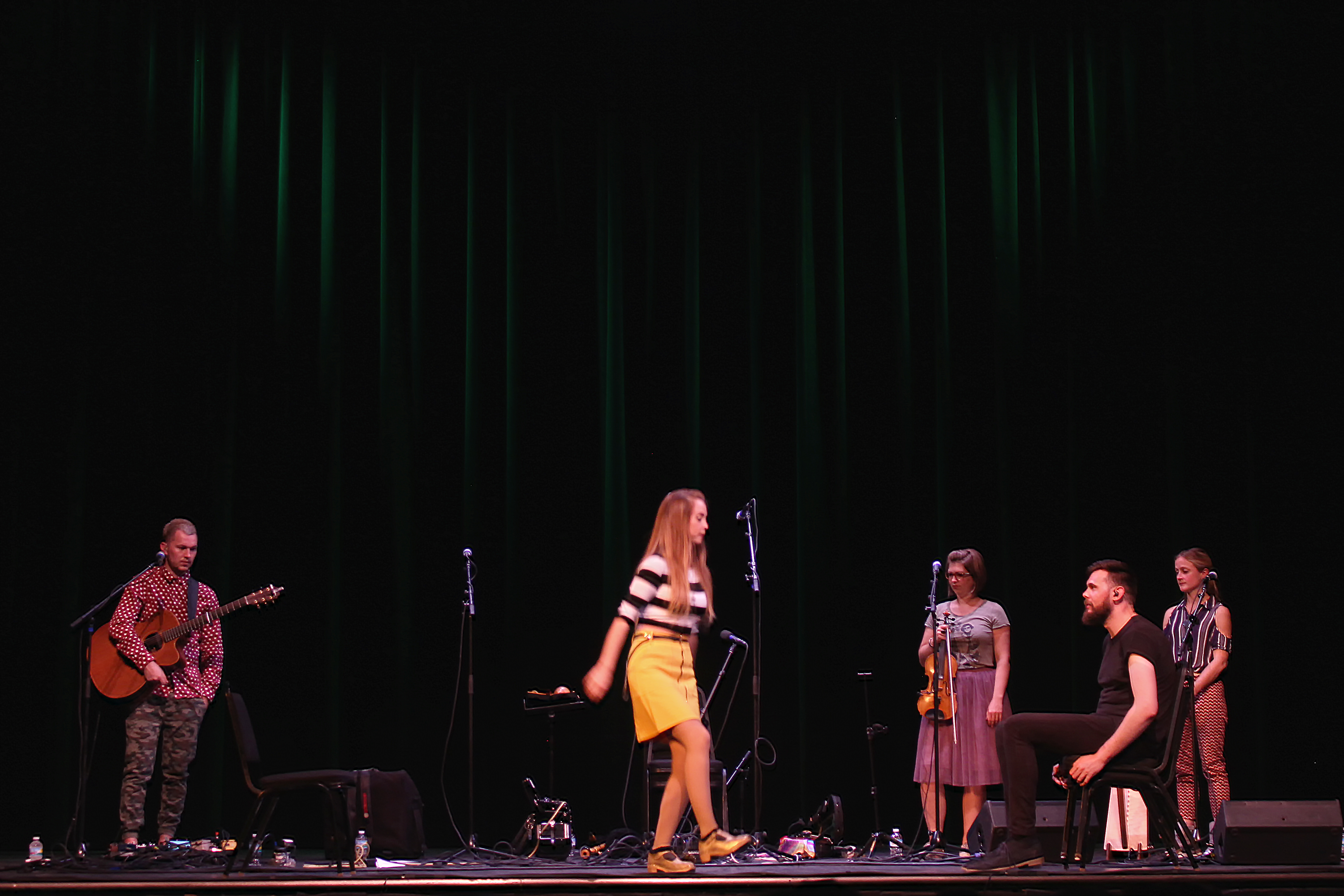 Calan performs in Harper Hall as a part of the World Music Series.
Photo by Angelica Hurtado

On Monday night, September 18, Lawrence University hosted the first World Music Series Concert of the 2017-2018 academic year. At 8 p.m., Stansbury Theatre was packed with audience members eager to hear Calan. Calan is a Welsh folk band which comprises five members with various instrumental and vocal abilities. In the minutes before the band took the stage, audience members had time to read the amusing program notes that detailed a few of the group’s adventurcalaes, including some time spent in a detainment cell in Chicago’s O’Hare International Airport due to a deportation misunderstanding.

Once the five entered the greenly-lit Stansbury stage, they took up their instruments and began to play an energetic tune that had members of the crowd bobbing their heads to the beat and even clapping along occasionally. From the audience’s perspective, from left to right, the band featured guitarist and producer Sam Humphreys; vocalist, champion clog-dancer and accordionist Bethan Williams-Jones; champion fiddler, bagpiper and vocalist Patrick Rimes; fiddler and vocalist Angharad Jenkins; and harpist Alice French. The band displayed eye-catching wardrobe choices with bold yet pleasing colors that somehow all worked together onstage. At different points in the concert, all would join in singing together, creating a rich, clear, almost solid sound.

The first couple of songs in the set featured some amazing clogging by Williams-Jones and impressive bagpipe and other wind instrument playing by Rimes. As I glanced around me in the theatre, people’s faces were alight with joy; it was apparent that Calan had already won over the crowd. Between sets, Jenkins informed the audience that they had just started their American tour, so they were feeling “quite fresh at the moment.” There was no doubt about it; the band seemed eager to engage and perform with spunk and artistry.

Some highlights of Calan’s performance included a somber piece called “The Rejected Maiden,” which told the heartbreaking story of a young girl who, after becoming pregnant due to a sexual assault, was cast out from her family and her village and ultimately committed suicide. The band also played a heartwarming lullaby featuring a beautiful harp and guitar medley that French dedicated to the band’s previous harpist, who had to leave the group after she had a baby.

On a lighter note, the band documented the night when two of them spent time in a Chicago O’Hare International Airport detainment cell with their song “#DeportationSelfie.” The song’s name is in reference to a selfie taken on the airport runway and posted by the band on Instagram, to which the press back in Wales reacted in a sensational fashion.

According to the program notes, Calan strives “…to prove that traditional music, based on folklore and taught and performed through the generations, actually does rock.” Indeed, the performance I saw in Stansbury Theatre was the closest to a rock concert that I have ever experienced there, and the folk elements of the band’s songs made everything richer. Calan even had the audience join in for part of their song documenting the tale of the dragon on the Welsh flag by shouting “Hey, ho shoo” twice during each chorus.

The band also encouraged the audience to come up to the front and dance for their final number, offering a free CD to the first person who dared to crowd surf. A crowd did gather before the orchestra pit at the base of the stage, and some people did dance freely to the final number, and almost everyone clapped their hands with enthusiasm to the beat. After the final number, applause and cheers were so loud that Calan returned to the stage for an encore.

Calan’s performance was able to make me forget the stresses and worries of a typical Lawrence Monday, and I do not think I was the only one; such is the power of great music. Thus, the World Music Series began with a bang last week. The next performance in the series will feature Nirmala Rajasekar Quartet on Wednesday, October 25.