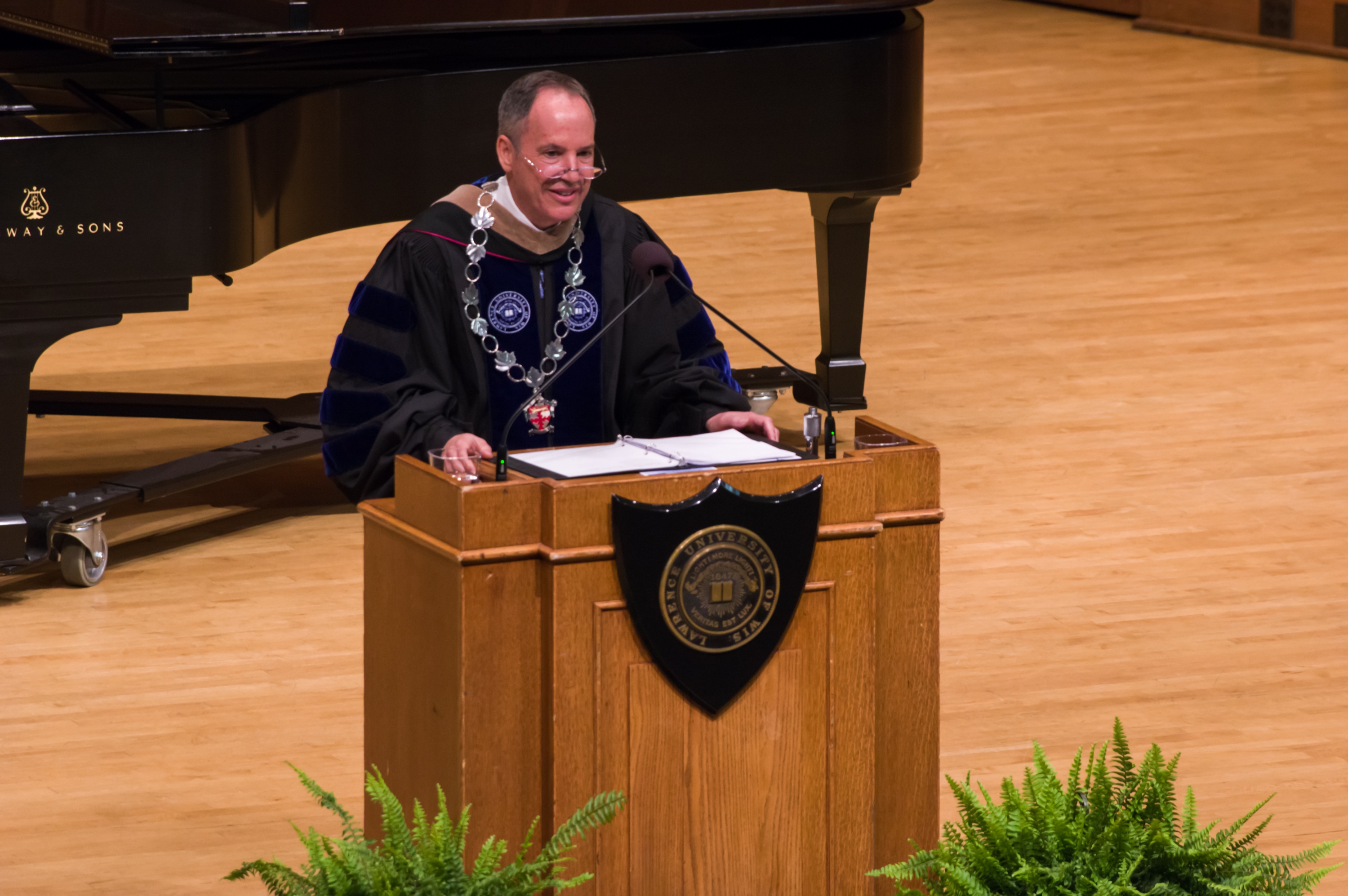 To address how the Lawrence community should move forward with the 2017-2018 school year, President Mark Burstein addressed students and faculty at the Matriculation Convocation held at 11:10 a.m. Thursday, Sept. 14. Burstein’s speech was preceded by the Welcome Week Choir singing “Unity” by Glorraine Moone, which set the mood for the address which centered around unifying campus values.

Burstein began by describing how this year has been “more of a nightmare than a dream” due to many reasons, such as the terrorist attack by white supremacists in Charlottesville, Va. and the weather disasters, such as Hurricane Irma. Burstein dedicated his Matriculation Convocation address to the families of Lawrence students feeling the effects of Irma.

According to Burstein, the role of liberal arts colleges is reinforced by the trauma in the world because a liberal arts mode of thinking, such as the one promoted at Lawrence, is committed to the pursuit of knowledge, understanding, and acceptance of others. “We need to remember who we are and the values that hold us together,” said Burstein, encouraging students and faculty to keep these values in mind during the year.

“We must define our values, or they will be defined for us,” stated Burstein, acknowledging the tension on campus and starting the conversation on campus values that he believes is essential for the campus. To teach emotional intelligence and empathy, freedom of speech with limits, and equity were what Burstein suggested as the main values the Lawrence community should think about for the next year.

In regards to empathy, Burstein mentioned its usefulness for careers and life after college to start, showing how it can be beneficial in future situations, as well as for life at Lawrence currently. Also, having emotional intelligence, the ability to monitor your emotion and to act accordingly is important for the well being of everyone at Lawrence.

Freedom of speech and academic freedom is the topic President Burstein emphasized the most. President Burstein emphasized the Academic Freedom Statement, which was adopted on February 7, 2017. This statement protects the right of students and staff to discuss any subject matter of their choice as long as there mutual respect for everyone involved in the conversation. The University may still restrict speech that is “defamatory of character, harassing, or infringes a protected right to privacy or confidentiality.”

In response to this statement, Burstein said that the “past few years have made it abundantly clear that we have a long way to go to create a community that fosters diverse opinions and is based on mutual respect and trust”. The University must take into consideration the psychological safety and the ability of students to learn, as well as the free speech of all students. Especially in regards to hate speech which has endangered the wellbeing of students in the past, such as in messages posted around campus last year. Due to this, Lawrence needs to find a balance in what free speech it allows, since complete freedom of speech will not create an environment that is needed on campus now.

President Burstein called on faculty and administration to help create equitable outcomes among all students. Prosperity is still disproportionately spread amongst the American population, with race and level of education being large factors in who does or does not succeed. President Burstein said it is up to the educators to ensure more equitable outcomes for all students.

Holding onto these values and deciding what they mean will be difficult and according to President Burstein “this is our chance to learn about who we are and who we want to be.” To help guide the campus, the Povolny lecture series this fall will bring in experts to discuss free speech and conversations on dialogue across difference will be hosted by The President’s Committee on Diversity Affairs.