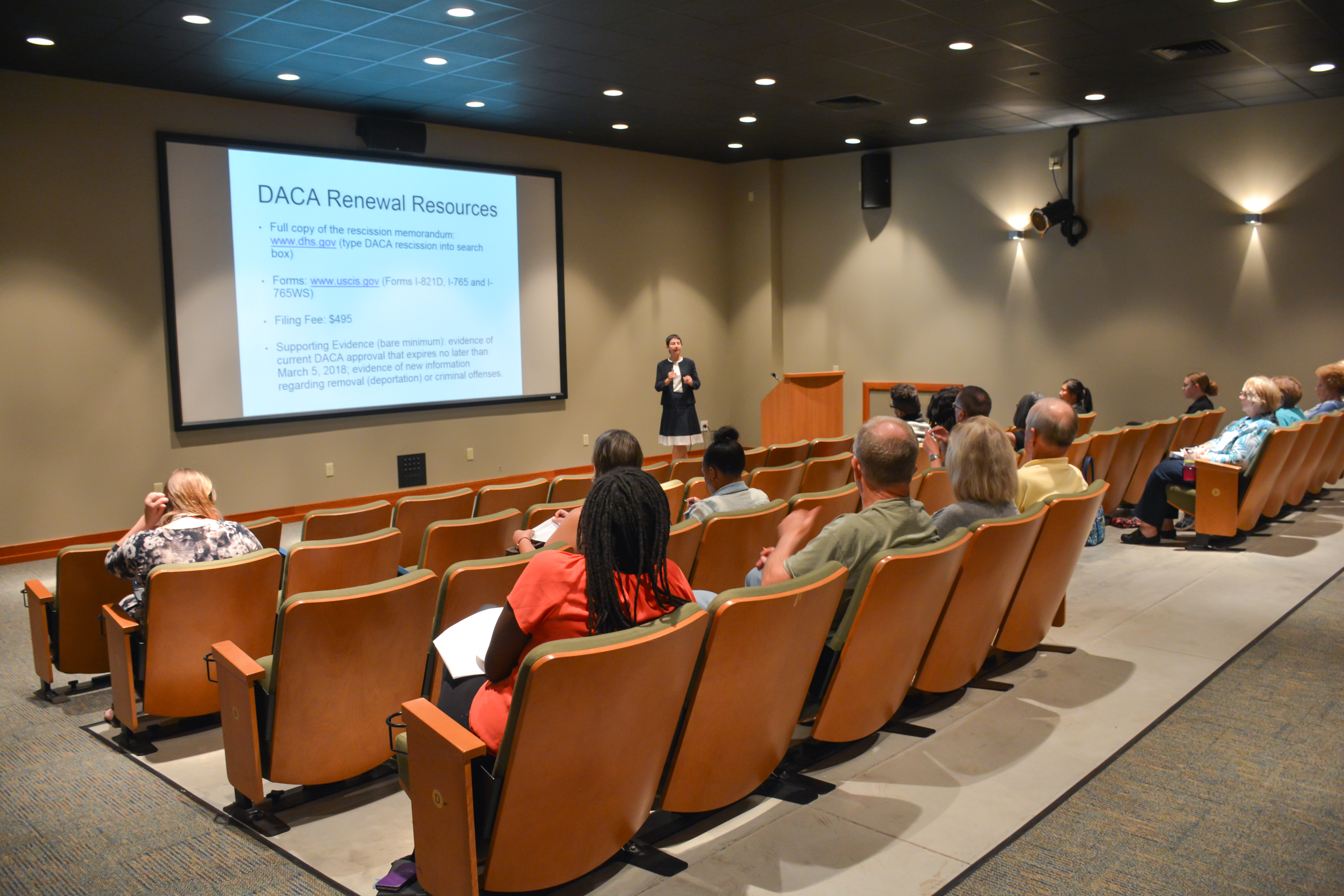 The presentation took place in the Cinema in the Warch Campus Center.
Photo by Zoe Adler

Santa María’s presentation broke down each piece of DACA, from where and why it began to how it came to be rescinded.

DACA’s intent was to provide certain undocumented immigrants who were brought to the U.S. by their parents as children—known as Dreamers—relief from the threat of deportation. In signing this executive order, former-president Barack Obama acknowledged that children are not to blame for the actions of their parents.

However, DACA is not citizenship. It instead gave undocumented individuals who immigrated to the U.S. before the age of 16 and had been living in the U.S. for a least five years the opportunity to apply for deferred action for two years at a time.

This deferred action meant DACA recipients could not be deported and could apply for employment authorization documents (EADs), allowing them to work.

With the rescission of DACA just this month, many recipients are now unclear on where they stand. Trump has stated that he wants Congress to come up with a new plan, or else he will revisit the issue, but for the time being, there is plenty of confusion.

Santa María touched on many of the arguments both Trump and Attorney General Jeff Sessions have made for the rescission of DACA.

“[Sessions] said, ‘Look, it’s functionally an amnesty, and the executive does not have the authority to do that. Only Congress can define who is lawful,’” Santa María explained.

Sessions and Trump also argued that by saying that a certain set of statutes—in this case, immigration statutes—will not be enforced, that the president is undermining respect for the legal system.

Additionally, there was a lawsuit filed by Texas and several other states against DACA in 2015, Santa María explained.

“[Sessions] said, ‘We’re going to end it now because when that litigation gets heard, it’s going to bring down DACA anyway. We want to do this in an orderly phase-out,’” she added.

According to Santa María, the phase-out will respect anyone’s deferred action and EAD until it expires and is allowing individuals with expiration dates prior to March 5 of 2018 to renew. These renewal requests must be filed on or before October 5. (This information is constantly changing, and anyone who has questions regarding their own DACA status should consult uscis.gov.)

Additionally, she explained, Trump has stated he will “generally” respect any DACA recipients’ currently active travel visas, but any new or in-the-process applications will be denied.

Santa María stated that because the situation is so time-sensitive, with only a small window of time to correctly file the paperwork, any individual who believes they are eligible for renewal should meet with a licensed immigration attorney in order to ensure everything is done properly.

She also advised that immigrants, especially Hispanic immigrants, be wary of notarios, because in Spanish, the word can mean lawyer. However, notaries are not licensed to file DACA paperwork and should an individual use a notary, that person—not the notary—would be responsible for any legal repercussions.

At the end of her presentation, Santa María allowed for sign-ups for free consultations. She met with anybody interested either for themselves, a family member or a friend and gave advice based on the current immigration environment.

She also strongly encouraged anyone who will be influenced in any way by the rescission of DACA to consult uscis.gov because so much is changing so quickly.

The presentation took place in the Cinema in the Warch Campus Center. Photo by Zoe Adler On Sept. 5, President Donald Trump rescinded the Deferred Action for Childhood Arrivals (DACA), leaving many undocumented immigrants unsure of their futures. On Sept. 14, Lawrence invited immigration attorney Mónica Santa María to speak about the current immigration environment…