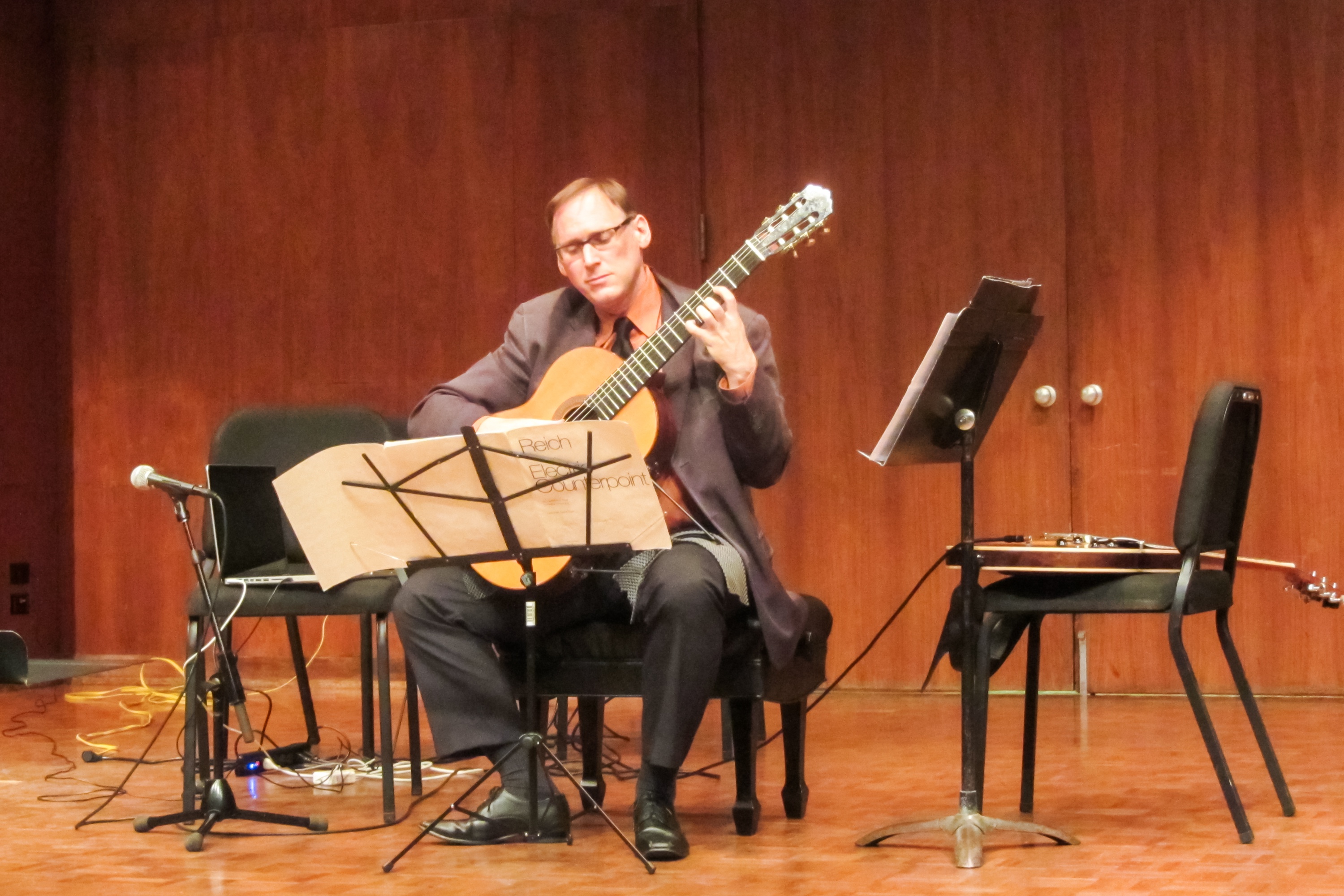 On Monday, Oct. 2—as the first in this year’s New Music Series line up—Daniel Lippel, a modern marvel guitarist, performed an impressive repertoire in Harper Hall. Lippel has performed all over the world and his repertoire reflected this. The composers had ranging nationalities from Argentinian to German, and the music was influenced by traditional Jewish tunes and African tribal music. Much of the music also incorporated electronics. One group that was widely represented was composers from the Manhattan School of Music, where Lippel studied.

The first piece played was Synchronisms #10 for guitar and electronic sounds,by Mario Davidovsky. What stood out about this piece was not the music itself, but the space between phrases where sound was allowed to resonate, filling the hall. While there was a considerable amount of dissonance between the electronic sounds, the effect was almost ethereal. The electronic sounds themselves felt reminiscent of the noises that generally accompany special effects. After the performance, Lippel spoke of how Davidovsky used pre-recorded guitar sounds, manipulating them the “old fashioned way,” by cutting and editing tape.

Lippel switched gears for the next piece, Alap from suite in Raag Marva by Vineet Shende. The intention of this piece was to blend traditional Indian sounds with modern classical guitar. The piece was played in a raag, most comparable to a melodic mode in classical Indian style. The raag was played on the guitar, with Lippel using back tones—notes played using the back side of his left hand. This style and technique displayed his virtuosity and passion for expanding the traditional guitar repertoire. The composer was a friend of Lippel’s who wrote the piece for him, and the connection between them was palpable. It was a wonderful and illuminating experience to hear the combination of the two traditions, Indian classical and Western classical.

Another friend of Lippel’s, Reiko Fueting, was the composer of the next few pieces, which included an arrangement of the traditional Jewish song Hine Ma Tov. The tune was present at the core of the arrangement, but that would not have been obvious to someone who was not familiar with Hine Ma Tov. This performance was followed by another arrangement of the same tune by Nils Vigeland. Listening to the two of them was thought-provoking because of the differences—some subtle, some obvious—in the way they incorporated the same tune.

Clearly establishing his love for Hine Ma Tov, Lippel included another arrangement of the traditional song later in the program; this time it was his own arrangement. This version of Hine Ma Tov was much more closely related to the original tune. The piece was a beautiful combination of modern and old; Lippel made the melody from Hine Ma Tov easily recognizable while putting his own contemporary spin on it. It was extraordinarily fun to listen to.

The final piece of the performance was a guitar staple: Steve Reich’s Electric Counterpoint. Like Hine Ma Tov, Lippel made this piece his own. Before he began to perform, Lippel explained the African inspiration behind the piece and his decision to include the electronic elements that set his version apart from others’: “I was tired of playing [Reich’s] way, so I decided to play with ten versions of myself.” His interpretation was extremely unique and filled Harper Hall with a beautiful abundance of sound.

Lippel clearly loved playing his own compositions and arrangements as well as those of his friends. Each piece was greeted with thunderous applause; after the final piece, the audience so profusely applauded that Lippel came back on stage for a second bow. Lippel’s incorporation of different cultures, styles and techniques created an incredible array of sounds. The performance was an exciting start to this year’s New Music Series, and will hopefully inspire people to embrace new music and attend more of these events in the future.