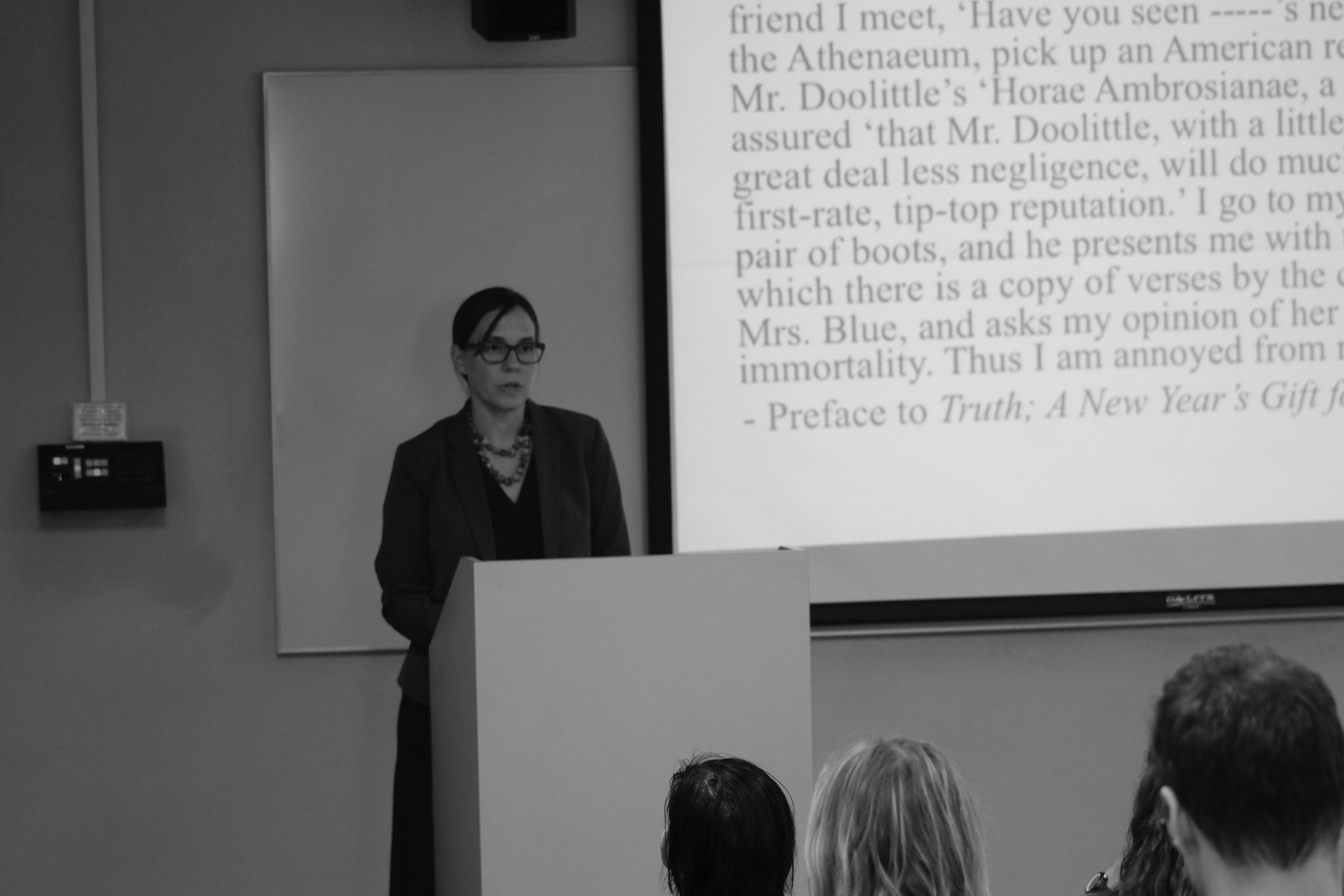 Many students and faculty members attended the talk which took place in Main Hall.
Photo by Allegra Taylor

After Dr. Alexandra Socarides published her book “Dickinson Unbound: Paper, Process, Poetics,” she found herself asking a question that she’d wondered about since her undergrad but hadn’t had the ability to answer.

“Why is Emily Dickinson the only female American poet of the nineteenth century that we know today?” Socarides asked during her talk on Friday, Sept 29 entitled, “Their Words Are Marching On: Nineteenth Century American Women’s Poetry in the Twenty-first Century.”

Socarides, an associate professor and department chair in the English department at the University of Missouri, asked this question in writing her recently completed book, “Everywhere and Nowhere: Nineteenth Century American Women’s Poetry and the Problem of Literary History.”

Her book tackles both the everywhere-ness and the nowhere-ness of the many female writers from the nineteenth century. And, one thing she made abundantly clear was that there was plenty of woman writers during that time.

Socarides made sure everyone understood that Dickinson was not the only female American poet of the nineteenth century. Despite that, most of these other poets and poems disappeared as time passed on and sexism isn’t the only reason.

“The other explanation describes this erasure as the result of a one-two punch beginning with modernism’s privileging of an experimental poetics over the sentimental, historical and formal poetics of the earlier period,” Socarides explained. “Here the problem lies with later reception and the inability of readers decades out to know how to read the poetry of an earlier time.”

Because of this, female poets of the nineteenth century are both everywhere and nowhere, because while they wrote prolifically during their time, much of their works are forgotten or not easily understandable.

However, argued Socarides, some of these woman poets still march on in today’s society, albeit anonymously, which is where the focus of her talk lay.

Poems including “Mary Had A Little Lamb” were written by nineteenth century woman poets, but, through the passing of time, these poets’ names were detached from their works.

Socarides zeroed in on three such poems—“Battle Hymn of the Republic,” by Julia Ward Howe, “America the Beautiful,” by Katherine Lee Bates, and “The New Colossus,” by Emma Lazarus to demonstrate her point that the words of nineteenth-century American woman poets are still being spoken and sung today.

She argued that these poems were, from the day of their inception, destined to lose their authors.

“In some ways, this estrangement of text from author was an utterly natural occurrence, for the poems themselves did not project some speaking ‘I’ who asks to be retained,” Socarides said. “They did not, in other words, deliver up the kind of lyric subjectivity that twentieth and twenty-first century readers came to expect from nineteenth century women’s poetry.”

On the flipside, she argued, the mass appeal of these poems was contingent on the estrangement of their authors.

“All of this is not to say that what we need to do is to cover the women up,” Socarides said. “In fact, it’s the story of their historical obscurity, of their simultaneous everywhere-ness and nowhere-ness, of the ways in which their poems have contributed significantly to the constitution of the western world in utterly anonymous ways that exposes for us the terms by which we might rethink how and why we go about recovering what’s lost.”

Socarides ended her speech by talking about the truth that the erasure these woman poets faced was truly inevitable.

“How we tell this story is a complicated question because if you take my argument to heart, what becomes curious is not that these women poets in the face of their texts’ popularity have been forgotten,” Socarides said, “but that we would expect anything other than this story of historical obscurity told three times over.”

Many students and faculty members attended the talk which took place in Main Hall. Photo by Allegra Taylor After Dr. Alexandra Socarides published her book “Dickinson Unbound: Paper, Process, Poetics,” she found herself asking a question that she’d wondered about since her undergrad but hadn’t had the ability to answer. “Why is Emily Dickinson the…