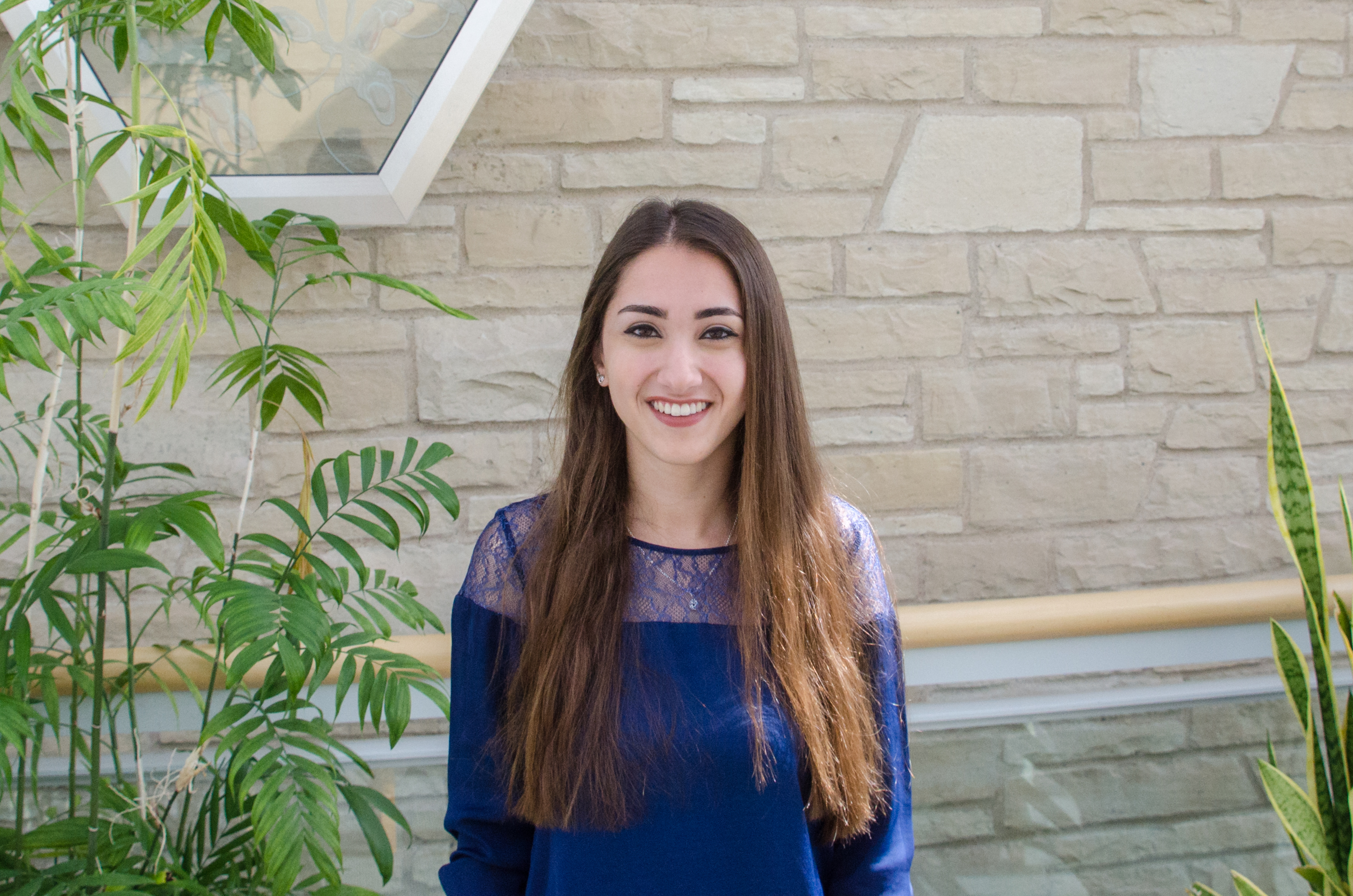 Senior biology, international relations and French major Dalia Khattab on the bridge in the Steitz Atrium.
Photo by David Baldwin

This column intends to find out what it means to be empathetic, strive for understanding and to document fulfillment in action by having conversations with students working on Senior Experience Projects at Lawrence on how they are using their studies and passions as tools to create.

For many students studying at liberal arts schools like Lawrence, interdisciplinary studies and the potential to connect different areas of interest may seem very exciting. For senior Biology, International Relations and French major Dalia Khattab, this excitement has charged her four years at Lawrence, and has continued to inspire a number of projects and clubs she is working on in her final year.

The major connection Khattab sees and values between biology and government is the process of developing public health systems. On this subject, Khattab stated, “For public health, what I’m really interested in is policy making. I’m looking into grad programs that are centered around it. In the process that many health organizations go through, like the Worldwide Health Organization for example, you have to study the diseases and their causes as well as prevention. But then it’s up to people to convince the government or non-governmental organizations (NGOs) to act on what you gathered from your studies. So in that way, I see biology and international relations as really intertwined.”

If there is one thing Khattab does not take for granted, it is how her different interests connect to each other. “I’m taking an entomology class right now that’s just about bugs,” she stated. “But I also see how bugs connect with the world and my studies. Malaria is carried by a bug. And in that way, bugs affect people and we have to respond to that. And that connects to the government as they figure what that response looks like. I really like how everything is connected. I take strictly biology classes and then strictly international relations classes, but they all connect.”

Khattab’s observations and connections have accumulated into the beginning of a Senior Experience that merges her interests in biology, government and foreign language. Khattab is working on a project that aims to provide biological information on tuberculosis (TB) in order to develop public health plans that can be implemented within refugee camps.

Khattab explained her initial interest in this project: “Last summer and the summer before that I interned at two refugee resettlement agencies, International Rescue Committee in New Jersey and Refugee One in Chicago. Both times I worked with the medical case management. And because I speak Arabic, I did a lot of interpretation work for the clients, especially the ones from Syria. Through this interpretation work, what came to my attention was how refugees dealt with their understanding of diseases. It was very different than what the American case managers were trying to get across.”

Khattab elaborated on these differences. “One time,” she explained, “we had a client whose son had tuberculosis and his parents did not understand the disease and why he needed to be quarantined. The refugees came to us, confused as to what was happening to them. They didn’t understand how TB has a latent phase and then it becomes active because something just triggers it. So, I’m looking at TB, since it has this complicated nature. I’m looking at how refugees contract it in crowded refugee camps, and then I’m going to go into how we educate refugees about TB and what NGOs can do to help.”

Khattab also sees how her French major connects to her senior project. Khattab stated, “A big part of public health is selecting the language for the specific audience you’re dealing with and showing them that their opinions are relevant and important. You can’t just say ‘No, you don’t know what this means.’ That’s something I learned in these internships. How to communicate in a way that others can understand and in a way that doesn’t make them inferior is a really important skill.”

As Khattab is working on the starting stages of her senior project, she is also looking towards her future, post-Lawrence. “I’d like to be making policy in the future,” Khattab said. “I’m finding through Model UN that it’s not coming up with policy that’s the problem. It’s how to implement policy that’s difficult. There are many examples of UN programs that don’t go as planned because they’re not being reinforced or monitored. They’re not focusing on them. I’d like to see how that really works, and how we maintain programs in order to benefit people’s health and communities as a whole, rather than only benefiting the health of single individuals.”

When she’s not working on all her studies, Model UN, the Arab Culture Club or GlobeMed, Khattab finds joy and peace in the little things around campus. Khattab stated, “Knowing that I have a good support system makes me happy. Knowing that it’s the little things that count. Like going to my room and knowing my roommate will be there to hear about my day. If I need anything I can reach out to people around me. That makes me really happy.” For Khattab, the last four years have been a culmination of the little things, whether it be the little connections she sees between her studies, or the little moments she’s had in her work with refugees, that have created a larger picture for her and inspired the work she’s doing now, as well as the work she hopes to do in the future.