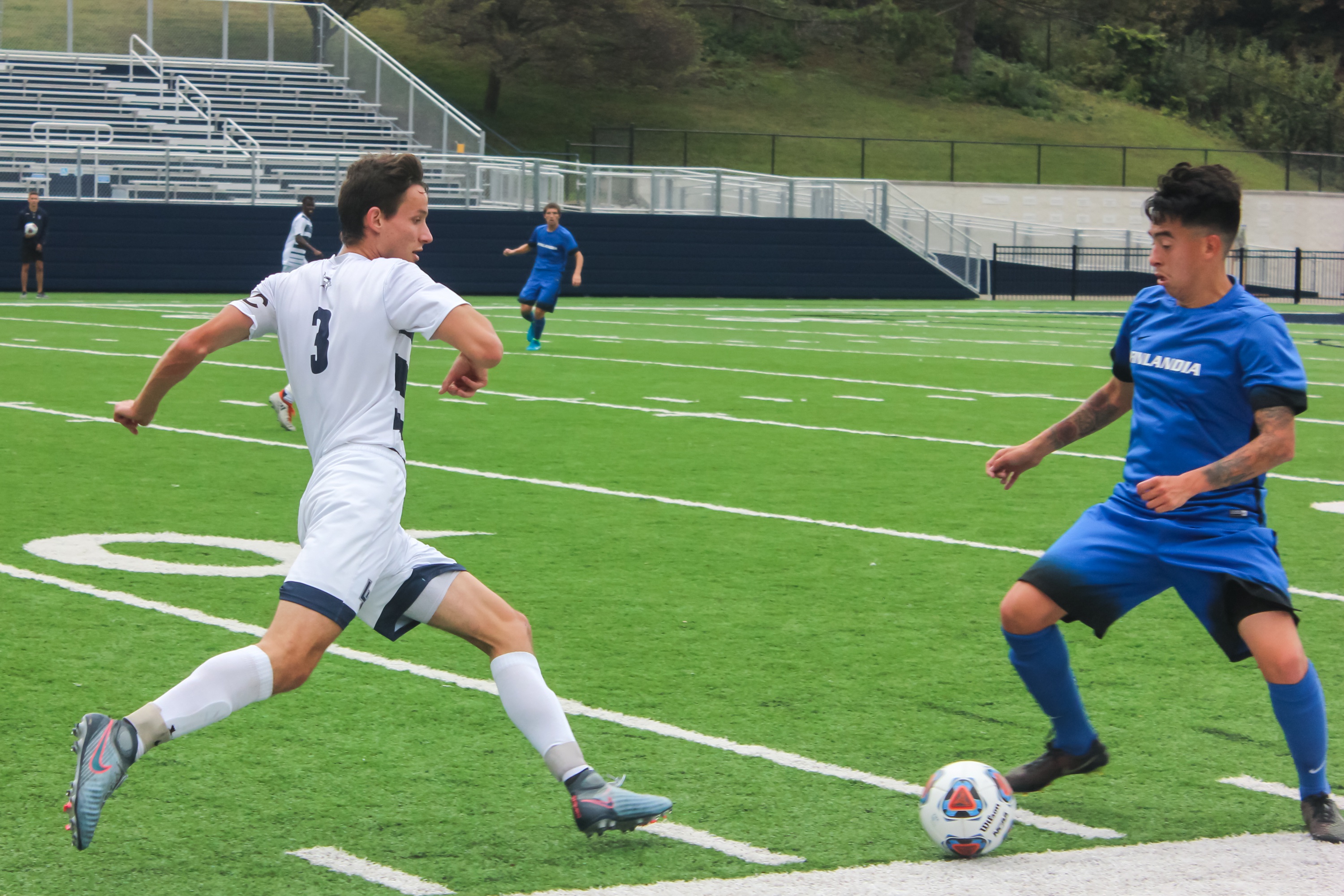 Senior Lewis Burger making a play on the ball.

It has been a busy week in Viking athletics. Amidst a flood of high school athletic recruits visiting campus, there have been a number of exciting home competitions. Never to disappoint, the men’s and women’s soccer teams have played a combined four home games in the past week.

The competitions kicked off Wednesday, Oct. 4, as the Green Knights of St. Norbert’s descended on Appleton. Being geographically close, The Vikings and the Green Knights are familiar foes. On the men’s side, the Vikings first faced the Knights in 1974. St. Norbert has won the majority of the confrontations, including the last four meetings. For the women, Lawrence first played St. Norbert in 1982. The Green Knights have bested the Vikings in the last seven matches. With this history in mind, Lawrence’s men and women took the field Wednesday with the intention of evening the record books.

The afternoon began with the women’s game at 4:30 p.m. The Knights came ready to play, racking up three points early in the first half, to which the Lady Vikes had no response. After half time, the Knights pulled off the same stunt again, scoring three goals in nine minutes to start the half. Two more goals by the Knights late in the second half rounded out the scoring. The blowout came despite the best efforts of Lawrence’s defenders. Keeper and freshman Katlyn Seiffert stopped 14 shots for Lawrence over the course of the game.

At 7:00 p.m., play recommenced with the men’s match against St. Norbert. The men suffered a similar fate as the women. The Knights put three unanswered goals past the Vikings in the first half, mirroring the Lady Knight’s performance three hours before. No hope came for the Vikings in the second half. St. Norberts scored a fourth goal in the second half. Despite the outcome, Vikings goalkeeper and freshman Julien Riviere played a strong game, stopping 15 shots on goal.

The Vikings had a chance to rebound from Wednesday’s losses on Saturday, Oct. 7 with two more home matches. The women faced Rockford University, while the men took on Finlandia.

The Vikings fought an up-hill battle against Finlandia. The Lions took advantage of confusion in the Vikings defense to score after only 61 seconds of play. Later in the first half, Finlandia added to this lead, scoring a second goal. The Vikings rallied in the second half, scoring once late in the second half. This momentum proved to be too little, too late. Lawrence fell to a final score of 2-1.

The Lady Vikes fared better against the Rockford Regents. Evidently learning from St. Norbert’s offensive prowess, the Vikings struck early. Senior Ryan Berkley scored the Viking’s first goal after only twelve minutes of play. Twelve minutes later, freshman Kelli Quick scored a second goal, the first of her career. The Viking’s 2-0 lead at half time provided solid footing on which to build. Berkley scored two more goals to open the second half. Freshman Amy Courter added a third, the first of her career, to bring the final score to 5-0, shutting out the Regents.

After Saturday’s games, the Lawrence men’s and women’s soccer teams stand with records of 1-10 and 2-10 respectively. Both teams are currently in last place in Midwest conference standings. While the season has started off rocky, there are games left to be played. The women take the field Oct. 11 (after time of printing) against UW Oshkosh at Oshkosh. This weekend, the Lady Vikes face Cornell on Saturday and Grinnell on Sunday at home. The men travel to face Ripon Oct. 11 (after time of printing). Additionally, the men face Cornell and Grinnell on Saturday and Sunday, respectively. Hopefully, the Vikings are in a position to improve upon their current standings.

Senior Lewis Burger making a play on the ball. Photo by Caroline Garrow It has been a busy week in Viking athletics. Amidst a flood of high school athletic recruits visiting campus, there have been a number of exciting home competitions. Never to disappoint, the men’s and women’s soccer teams have played a combined four…