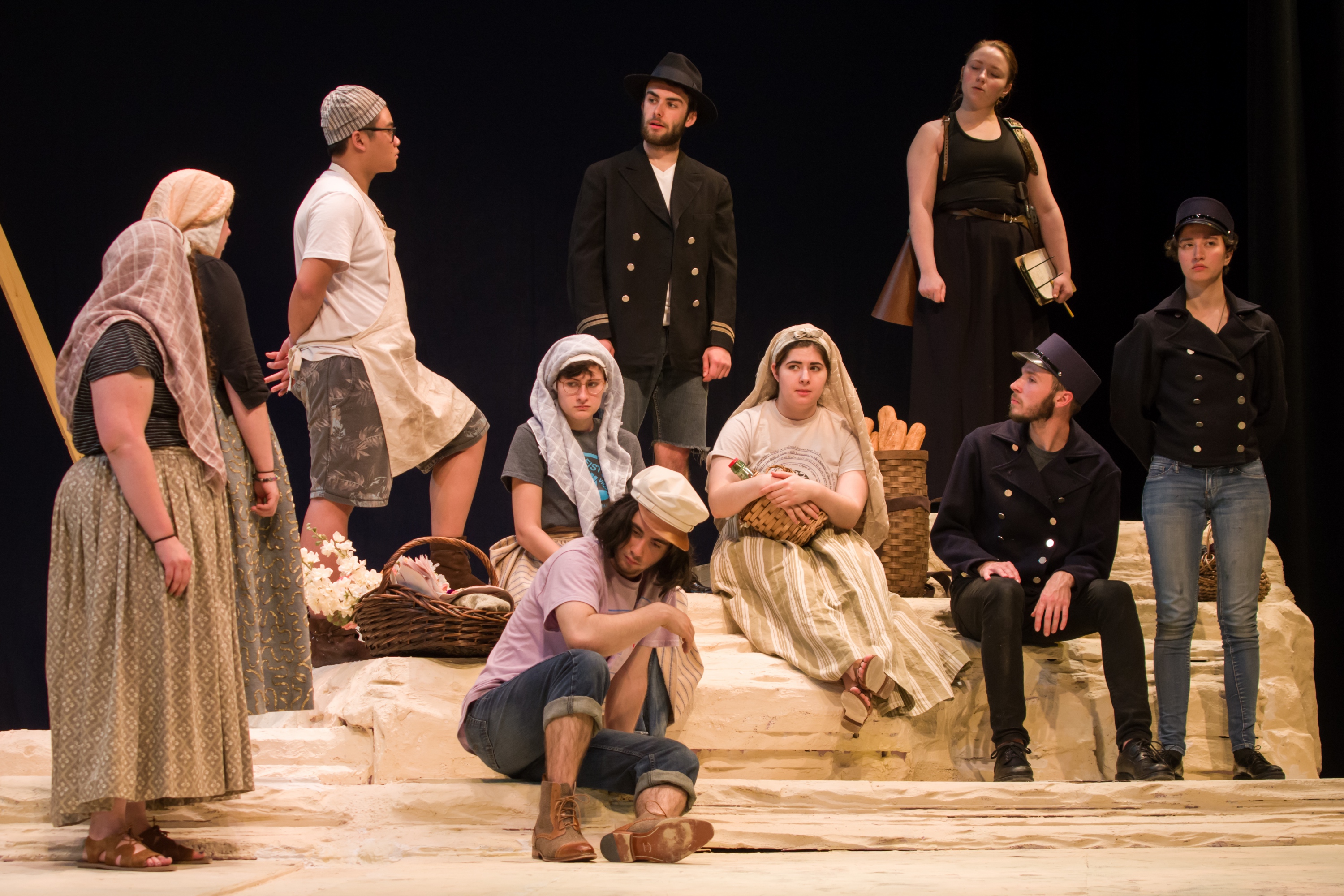 This Saturday, I had the pleasure of seeing Lawrence’s production of “Burial at Thebes,” directed by Professor of Theatre Arts and the J. Thomas and Julie Esch Hurvis Professor of Theatre and Drama Timothy Troy. “Burial at Thebes” is based off of Sophocles’s “Antigone.” I walked into the performance with a unique perspective on this particular piece of Greek tragedy; I’ve studied it in a class this term. For those who do not know, “Antigone” is a play written by Sophocles, performed in ancient Athens. The play centers around a girl named Antigone, who is forbidden by the king (her uncle, Creon) to bury the corpse of her brother, Polyneices, because he waged war on Thebes with his eyes on the throne.

I had very distinct impressions of each of the main characters in the play. Senior Jenny Hanrahan carried the character of Antigone with dignity and righteousness. Sophomore Flora Aubin’s Ismene was that of a motherly elder sister; her performance conveyed deep care for Antigone and strong familial support. In context with the plot, this makes sense. Their family has suffered through quite a lot, as they are the daughters of Oedipus (the famed character who accidentally killed his dad and married his mom). Antigone and Ismene are the only two left, thus the choice for Ismene to want them to stick together is very meaningful. Less serious were the scenes with the guards. Juniors Dan Meyer and Delaney Stewart’s guards were a perfect comical interlude to the overall serious tone of the play. Junior Ming Montgomery played Teiresias, the old, blind seer who supports Antigone’s decision to bury her brother because he believes it is what the gods want. A new character was added for this specific performance: the character of Rhetor, Creon’s secretary, played by junior Abby Simmons. Rhetor’s character is split with that of Creon, that is, taking some of Creon’s lines and dishing them out to this character. Rhetor was very prim and proper, armed with a clipboard and bullhorn, reciting Creon’s decrees and agreeing with his choices in a rather sycophantic manner. I found that I really enjoyed this part of the performance, as it showed someone who eagerly helped Creon dole out justice.

The chorus in this performance was portrayed as Theban villagers, rather than the chorus of city elders in Sophocles’s original. They wore simple peasant garments, with props including baskets, flowers and (my favorite), a goat skull on a staff. The choral interludes were rather unusual, for they ended with a strange chorus dance that would introduce the next sequence of the play. From when they are first introduced, right after the tense opening sequence with Antigone and Ismene, the chorus is present throughout. As they were the Theban people, this to me represented the villagers’ close watch of Creon’s every decision.

A standout performance to me was senior Liam McCarty-Dick’s performance of Creon. Though Creon is a king, the costume seemed to identify him as more of a city official-type figure. The character of Creon in the play is proud, egocentric and even a little paranoid. Throughout the play, Creon refuses to listen to anyone who tries to tell him what he does not want to hear, insisting that his way is the truly responsible way to lead. He is paranoid because he suspects anyone and everyone of taking bribes to say certain things in attempts to undermine his authority. McCarty-Dick did a great job of maintaining all of these qualities while also making Creon a noble and dangerously likable villain in the performance. Creon’s character arc does a one-eighty in the last couple scenes, as he realizes the disasters that he has created due to his inability to listen, especially to the ones he loves.

This performance of “Burial at Thebes” was also special because I was able to witness a number of classmates and friends be a part of it (in fact, three classmates from my Greek and Roman Drama class were there). The cast did a wonderful job portraying the struggles that each character had to go through; in addition, they kept this ancient play as relevant as ever. There were particular asides that were made directly to the audience: “Solidarity is what we need,” “No kingdom belongs to a single man,” “Mistakes can be admitted and atoned for.” The characters in “Burial at Thebes” are united against a leader whom they know is making the wrong choices. Through these lines spoken directly to the audience, the play reminds us of the importance of standing together and standing up for what we believe is right, no matter the consequences.