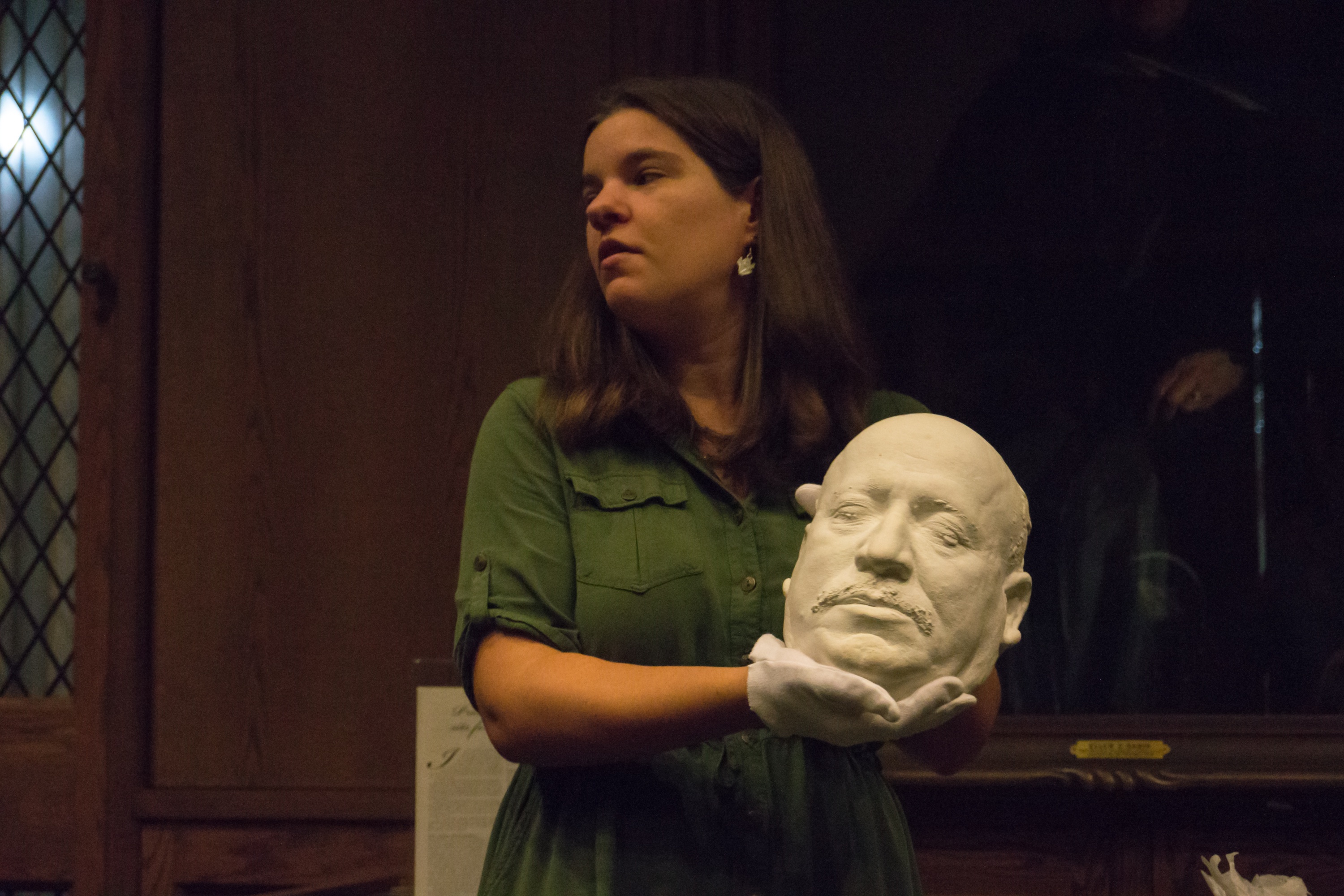 Junior and Student Assistant to the Archives Carolyn Ford holding a plaster cast of the face of former Lawrence president Samuel Plantz during Haunted Lawrence Presentation in the Seeley G. Mudd Library.
Photo by Larissa Davis

On Thursday Oct. 26, a group of about 30 students huddled in the Seeley G. Mudd Library’s Milwaukee-Downer Room. With dimmed lights and drawn curtains, the group spoke in hushed whispers of anticipation, eyeing a table with sheets of photographs and a mysterious, slightly wrapped object displayed in the front of the room. At last, with the dying chimes of the clock at 8:00 p.m., junior and Student Assistant in the Archives Carolyn Ford took the floor to give the audience chilling narratives of spooky happenings throughout Lawrence history.

The Haunted Lawrence tour is a tradition ten years in the running. Ford explained, “There is an ongoing word document in the archives full of stories, and whenever anybody has any new stories I’ll type them in.” This process allows the tour to include more and more information on the spirits which may haunt the campus. Here are some highlights from the Haunted Lawrence presentation.

The group learned a little about the history of Main Hall. Built in 1853, it was, at the time, the only building on campus and the hub of Appleton’ city and society. Over the course of its history, a few professors have met mysterious ends during their tenure at the university. Hiram Jones, for whom the original library in Main Hall was named, was the first incident. On a day just like any other, the professor entered the classroom, exchanged greetings with students, and began to call role. Suddenly, the professor lurched forwards, clutching at his heart. As the students started from their seats, they found that it was too late. Jones’s soul had departed, only to haunt the floors of main hall in years to come, reportedly shushing students and giving the chilling sensation of an unseen observer looming over test-takers.

Lawrence’s first female professor, Emma Corks, met a similarly sudden end. Having taken a break for mental health one semester, Corks was not heard from until news reached campus that she had suddenly died. This unexpected departure of Lawrence’s first female professor reeks of foul play. However, whether this death was brought on naturally or the result of murder remains a mystery even to this day.

Ormsby Hall, built in 1889 and housing many Lawrence students, continues to trouble its residents with a mysterious spirit to this day. The troubles began on midnight of Feb. 14 1899, when the women residing in the hall heard a deep groan emanating from Ormsby attic. Arming themselves with umbrellas and any other “weapons” at their disposal, the ladies must have made quite a sight as they banded together and charged at the source of the ghost. Though no spirit was found that night, its presence continues to be acutely felt by students living in Ormsby. This year, there have been reports of students waking with mysterious scratches like those of a cat’s on their bodies, and many residents or former residents of Ormsby have a tale or two to tell of objects toppling off of surfaces without explanation and strange noises in the night.

While Björklunden may be a favorite destination off campus for clubs and classes to go for a weekend getaway, beware of staying past your welcome. Once, when Lawrence used to bus freshman up to the lodge as part of welcome orientation, one student was accidentally left behind when he napped past the departure time. Upon waking in the huge, silent house, the student immediately phoned campus to be picked up. Shortly after this call, the phone rang. When the student picked up, he heard a woman’s voice say “Who are you, and what are you doing here?” It is thought that this call came from none other than Winifred Boynton, original owner of the lodge who had passed away some years before. Clearly, Mrs. Boynton remains firmly attached to the house and does not like trespassers in her beloved lodge.

Finally, the tour touched upon some haunting tales not attached to any particular buildings. If anyone has seen a dog roaming alone on campus when no one is there to claim being its owner, they may have witnessed the wandering spirit of Maxie, a beloved campus dog who became a community pet when his owner was forced to leave him behind. When the dog finally passed away, students buried his body under a large rock on campus which has since been moved. The dog’s lost soul still wanders the campus today, according to those who have heard his bark or witnessed him at odd hours when no one else is out. A haunted gravestone is also a favored destination for fright: the gravestone of Kate Blood is said to actually ooze blood from within, some say at midnight on a full moon, while others maintain that Halloween is the only time this frightening sight can be witnessed.

The tour concluded with Ford unwrapping the mysterious object to show the wide-eyed audience the death mask of Lawrence’s beloved former President Samuel Plantz. When the president passed away, the mask was given to Archives to treasure. Ford at last revealed the mysterious object lying on the table to be a white plaster likeness of the former president’s face, sending chills down the backs of all present. Even with the frights of Halloween over, the Lawrence campus can foster fear in the hearts of those who catch a glimpse of the spirits who roam the campus.

For any who missed the tour this year, Haunted Lawrence has been an ongoing tradition for ten years and will likely happen again next year. According to Ford, Archivist and Reference Librarian Erin Dix “normally has Security guys or guys from Facilities come to tell their own stories”, giving students the chance to hear first-hand accounts of mysterious happenings. Anyone who witnesses ghostly occurrences should be sure to contact the Archives, so new tales can be added to the ever-growing collection of haunting stories.