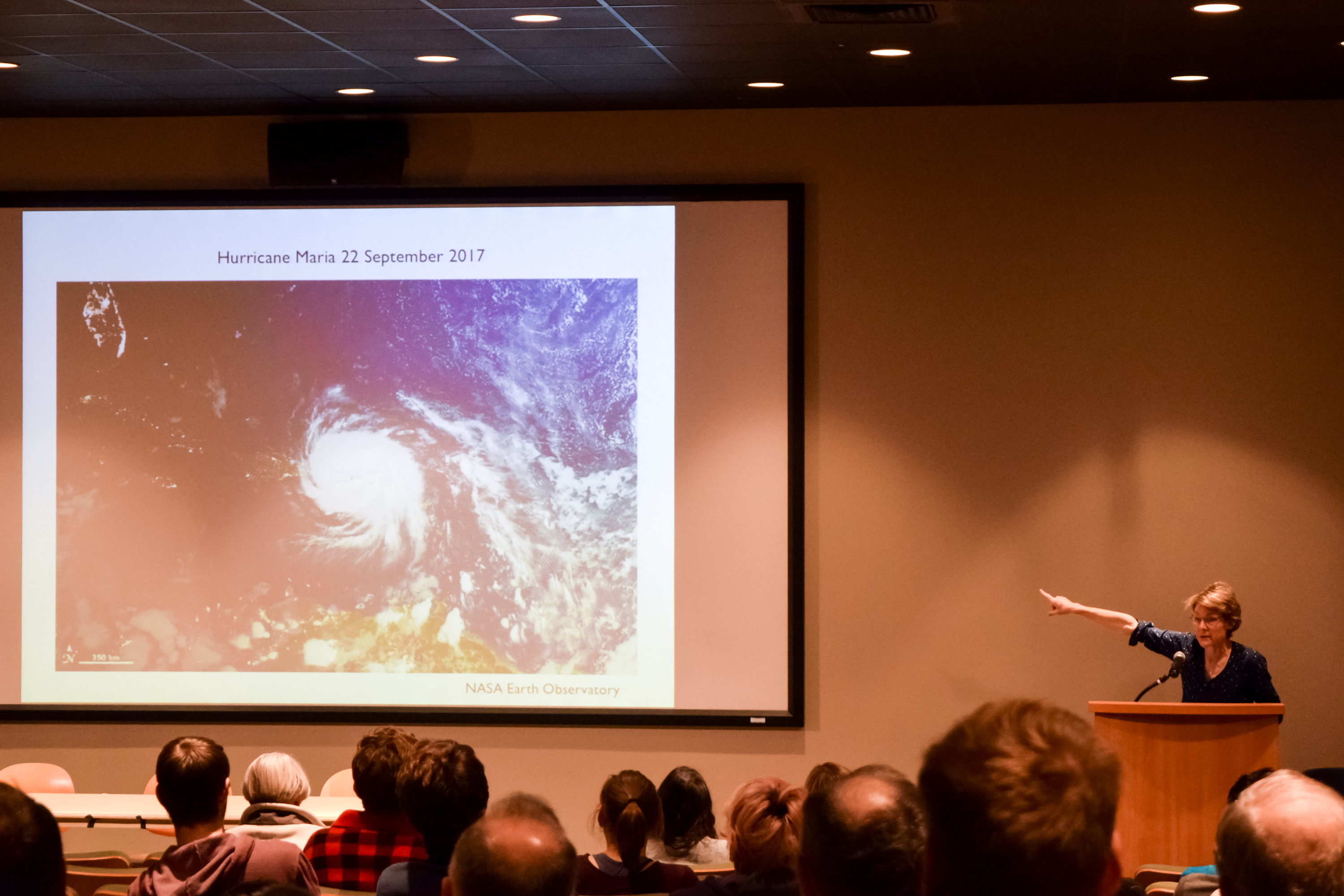 Walter Schober Professor of Environmental Studies and Professor of Geology Marcia Bjornerud spoke about climate change and its effect on hurricanes at the panel.
Photo by Sara Nocton

There are four main criteria needed for a hurricane to form. First, a sea surface temperature of 27 degrees Celsius (80 degrees Fahrenheit) or higher. Second, Instability caused by a cluster of thunderstorms. Third, The Coriolis effect, which causes the rotation of low pressure systems. Fourth, upward convection being greater than upper level wind shear, which is high altitude wind speeds.

One of the main ways that climate change will affect hurricanes is with increasing sea surface temperatures. This past September, water temperatures in the Caribbean were very high, which made it easier for hurricanes to form. Also, rising sea levels will cause the flooding, which comes with hurricanes to go farther inland, affecting more of the population.

Edwin and Ruth West Professor of Economics and Social Science and Professor of Government Claudena Skran talked about the economic and political consequences of hurricanes as well as how governments can improve their responses to hurricanes. Skran began by explaining the many things which make the Caribbean a complex region, especially focusing on the effects of colonialism.

According to Skran, the effects of colonialism are a major reason for why there is difficulty forming alliances between Caribbean nations. Also, many of the islands in the Caribbean are still oversea territories of countries such as the United States, the U.K., France and the Netherlands.

Skran stated that tourism is a large part of the economy in the Caribbean, and so the economy is very vulnerable to hurricanes. Even if an island is not actually hit by a hurricane, if the region is perceived as having bad weather ,then even islands not in the path of the hurricane will see a decline in tourism. Cuba has the largest economy in the region, but due to complex politics surrounding Cuba, its economy is largely removed from other economies in the Caribbean, and so this economy does not benefit the rest of the Caribbean.

Puerto Rico is not receiving as much aid from the United States as it needs and is still largely without electricity. Also, since Puerto Rico imports a large amount of its food, and crops were largely destroyed, there is a food shortage. Also fresh water is still not available in parts of the island so many people are drinking contaminated water.

Colon stated that there are hopeful movements in Puerto Rico for helping the rebuild infrastructure. The Loiza Hurricane Relief Fundraiser raised money for lower income parts of Puerto Rico, such as the community of Loiza, which have not received as much aid. Also, Resilient Power Puerto Rico is providing parts of Puerto Rico with solar power. Also to combat food shortages, the Boricuá Organization for Ecological Agriculture is promoting self-sustaining farming in Puerto Rico.

Many of the problems that nations in the Caribbean face still have been dropped from news cycles, which is why the Lawrence University Caribbean Support Team is trying to raise awareness and fundraise for nations which are not receiving as many donations. There are boxes around campus for donations that will be delivered to locations throughout the Caribbean. Also, the Caribbean Support Team is hosting a Caribbean Food Day on Saturday, Nov. 9 from 5:30 p.m. to 8 p.m. in the Quad houses. This will be a buffet style event with food and music from Caribbean and Latin American countries. There will be a $7 admission fee which will go to the fundraiser.