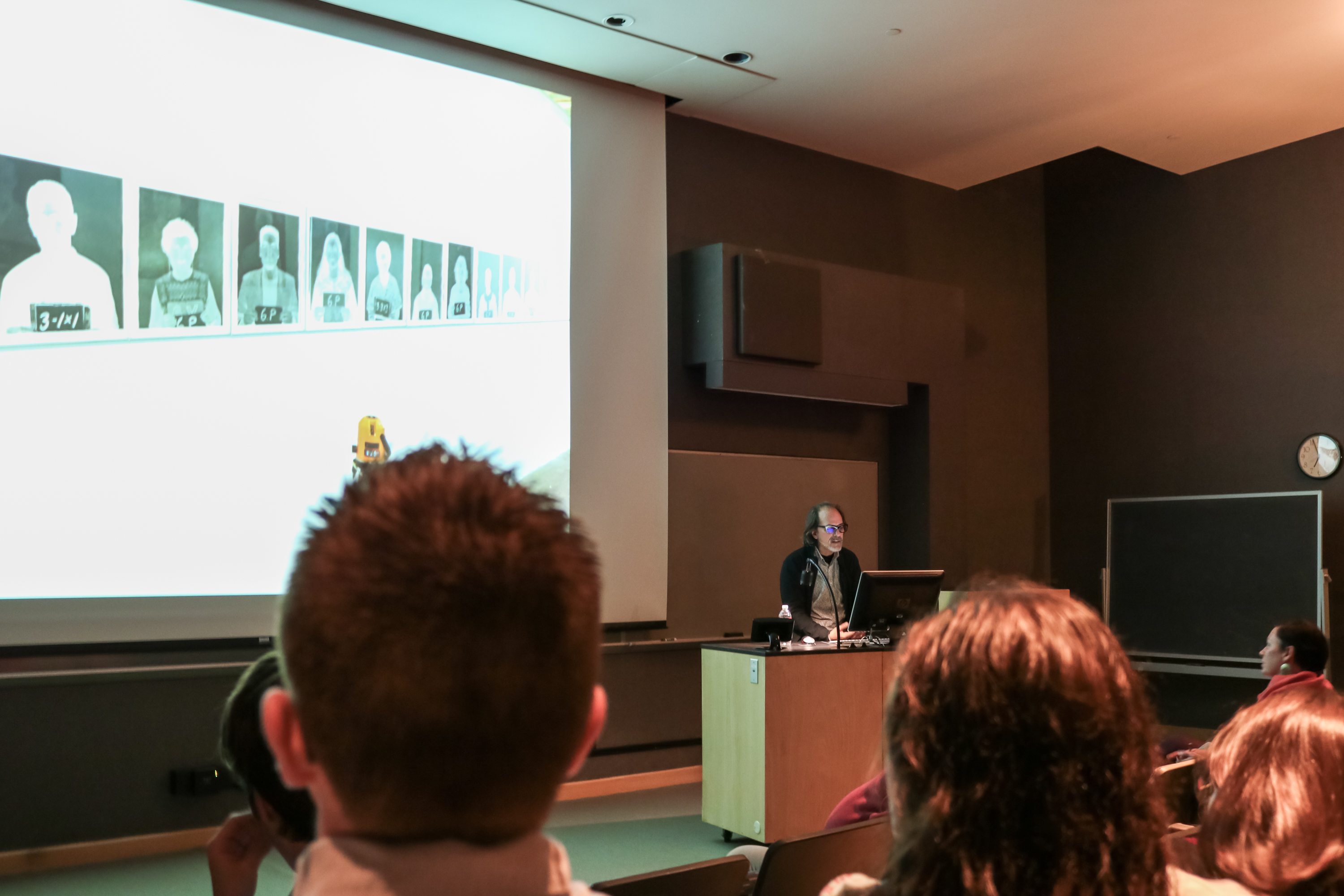 Students gather in the Wriston Auditorium for the Arist Talk.
Photo by Nidi Garcia

Ramírez came to Lawrence to talk about his work in “The Light in Cuban Eyes: Selections from the Madeleine P. Plonsker Collection of Contemporary Cuban Photography,” a central part of the exhibition. All of the interested students, professors and community members, having enjoyed a welcoming reception, were ushered to the auditorium as Ramírez was introduced. He explained that his goal for the evening was to educate viewers about the history of Cuban photography and explain the thoughts behind some of his work.

Ramírez began by talking about the first use of the daguerreotype photography process in Cuba in 1840 and the decades of experimentation that followed. He touched on the Cuban War for Independence in 1895, explaining that analyzing the subjects in photographs—gaining an understanding of how and why they were chosen—can also give us an idea of what people considered to be important at the time. Between the War for Independence and the Revolution of the 1950s, photographers like Alberto Korda had many opportunities to explore the wide range of emotions surrounding Cuba’s tumult.

Ramírez asserted that in the 20th century, Cuban photographers like Joaquin Blez found a perfect middle ground between realism and abstraction—extremes under exploration in other areas of the world. Continuing to the dawn of contemporary photography in the 1980s, Ramírez explained how camerawork began to earn wider and deeper respect in the art world of Cuba. He showed the edgy, angsty work of René Peña and the surrealism of Raùl Cañibano.

Cubans have a strong collective interest in reviving the past and exploring their “emotional history” through art. Ramírez, with his photography partner, Liudmila Velasco, decided to go all the way back to the beginning to work with a daguerreotype camera. They received the device—one of twenty in existence—which costs about $700,000, on loan. It took a lot of time and effort to learn how to operate and maintain the camera. They experimented with many different methods of image production.

Finally, Ramírez showed a few of the photos they took. There was a suited man sitting on a riverside dock in Salzburg, his body perfectly hiding the frame of the chair. There was “the first girl who broke my heart.” There were children superimposed on landscape shots. There was a pair of tiny legs sticking out from behind a tree. There were many homages to the photographers he had mentioned earlier. In conclusion, Ramírez said that he and Velasco worked to create “a place where you go…to make up your mind about the past and the present and begin to question the future.”

After the talk, the crowd moved to the gallery, where Ramírez’s work and many pieces by the artists he had mentioned hang together.

You can visit the Wriston Art Center Galleries to enjoy them for yourself. Plaques in the gallery will guide you on an explorational journey through photography history. On the way through, you will find other recent acquisitions, including work by Lawrence art faculty, “Pulped Under Pressure,” an exhibit of ecologically-focused handmade paper crafts, and much more. The Winter Term Exhibitions will be open until Friday, March 9.