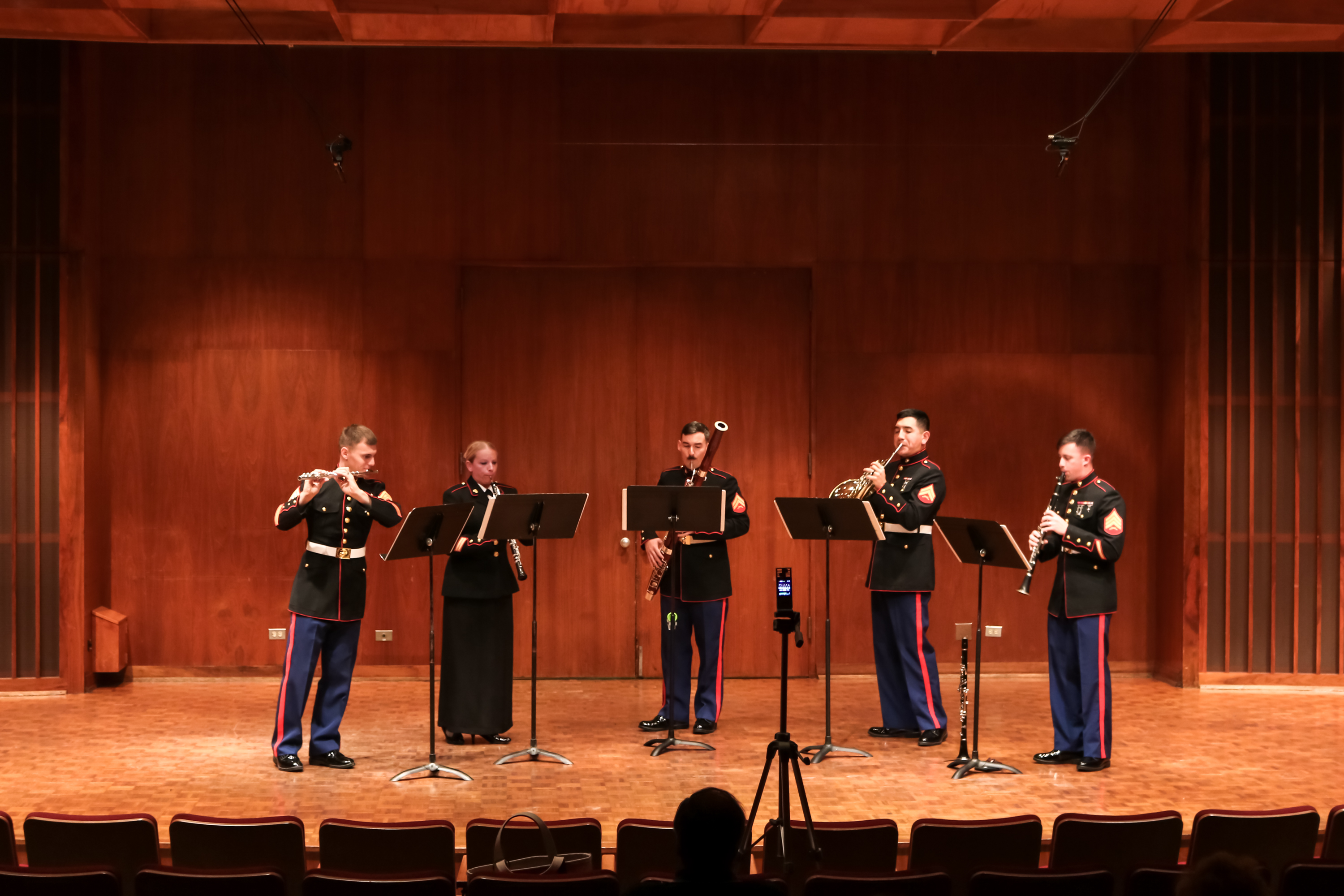 The Marine Corps Forces Pacific Woodwind Quintet performs in Harper Hall on the afternoon of Jan. 21.
Photo by Nidi Garcia

According to the concert program, the Marine Corps Forces Pacific Woodwind Quintet is a split-off group from the Marine Forces Pacific Band (MARFORPAC), which is based in Hawaii. The band performs repertoire for customary functions, and in 2017, the MARFORPAC Band won Marine Corps “Band of the Year,” which they have won for several years previous. The MARFORPAC Band can also split off to form a brass quintet, rock band, jazz combo, and brass band.

The quintet was the image of decorum and respect: all of its members stood onstage in immaculate formal uniform, with shiny buttons and shoes and standing with erect posture. They performed a variety of arranged pieces, a few of which were dances. Their first piece, “The Circus Bee” by Henry Fillmore and arranged by Bill Holcombe, showed the quintet’s skill right off the bat. Every instrument’s tone was clear and articulate, and the ensemble made careful eye contact throughout. Their second piece was Farkas Ferrenc’s “Early Hungarian Dances,” which included many short lilting figures and pleasant melodic parts in its five movements. Then, the quintet performed a difficult piece by Béla Bart́́ok called “Petite Suite Hongroise,” which included difficult rhythmic coordination that the ensemble executed flawlessly.

Next on the program was an arrangement of Georges Bizet’s “Habenera” from “Carmen,” which the ensemble played at a slow, held tempo and which seemed a little comic. Next, the ensemble played with syncopation and other groovy rhythms in “By the Sea” from “Sweeney Todd” by Steven Sondheim and arranged by Michael Gebhart. Then they performed a piece called “Earth Song” by Frank Ticheli, a composer whose works have been performed by Lawrence’s Wind Ensemble in the past. This piece was my favorite on the program, with its yearning and sentimental melody and very in-tune unison passages. After, the group showed its deftness in playing in a classical style with an arrangement by the Philadelphia Woodwind Quintet of Joseph Hadyn’s “Divertimento No. 1 in B-flat.”

The quintet closed their concert with two pieces composed by popular band composer John Philip Sousa, “The Liberty Bell” and “Hands Across the Sea,” arranged by Bill Holcombe & Paul Battles and David Bussick, respectively. These pieces seemed to be a crowd favorite, and they included many sections of punctuated dynamic call-and-response. After the last piece, the audience applauded so much that the quintet returned to the stage to perform an encore piece.

The Marine Corps Forces Pacific Wind Quintet displayed their superior playing and showcased a Lawrence alumnus in their concert. They provided a great musical example for aspiring students in the audience and represented a respectable career path that some Lawrence graduates may want to consider for their futures.