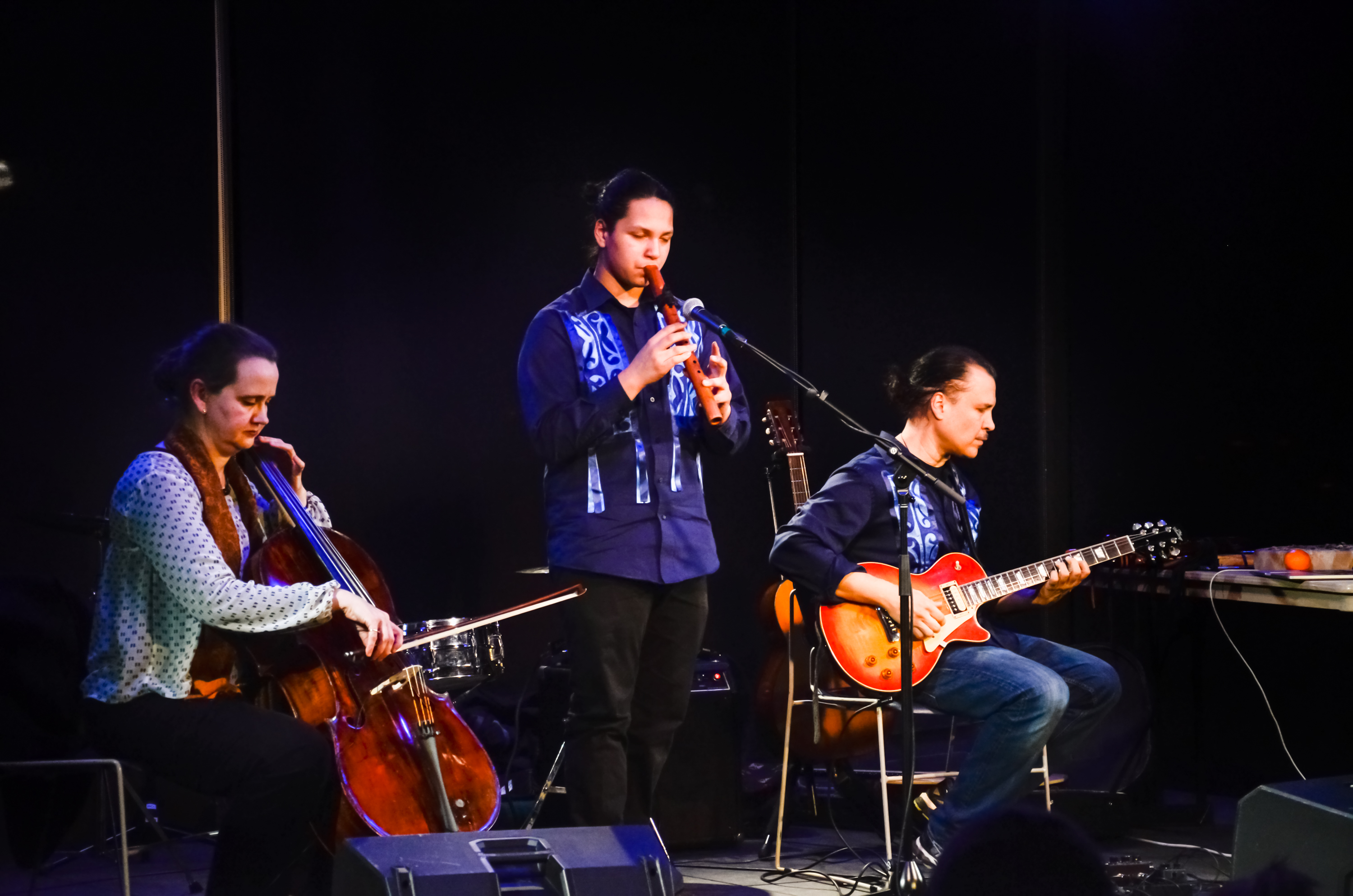 When I went to Esch Hurvis to see Wade Fernandez, I had little idea of what to expect. The posters around campus had labeled it “Contemporary Menominee Music,” and I—and, I suspect, most of the audience (comprised of students and Appleton citizens alike)—only vaguely knew what that meant. The performance started with Wade playing several solo flute improvisations. The sound of the native flute was captivating, and it was clear that Wade was very skilled at his craft. There were many intricacies to his playing, like trills and pitch bends. After playing the flute with his fourteen-year-old son Quintin and a guest cellist from the Fox Valley Symphony, Nancy Kaphaem, Fernandez made the transition to electric guitar. His guitar playing on “Song of the Wolf,” into which the band transitioned after the flute improvisations, was melodic with a very solid blues foundation.

After “Song of the Wolf,” Fernandez joked around a bit and talked to the crowd, telling a moving story about his grandmother who succumbed to diabetes at age 55. He told us how his grandmother was blind, and that she would touch his face to be able to tell which grandchild he was. The next song, “Nokomah,” was about the feelings this evoked in him. The song was almost entirely spoken word, with a drum coming in to accompany Fernandez about halfway through. He finished the song by singing the chorus from “Song of the Wolf.”

It was at this point in the performance that Fernandez switched to acoustic guitar, and I became more and more aware of sound issues throughout the rest of the set. “Guns” was an acoustic blues song that was ultimately a meditation on gun violence. The guitar was barely audible throughout the song, with loud blasts of cello throughout. Fernandez’s voice, much more audible in the previous songs, was harder to hear in this one. After the song, in an attempt to turn up his guitar volume, it appeared that Fernandez instead raised the volume of the cello.

My favorite part of the performance, other than “Song of the Wolf,” was the next song on Fernandez’s setlist: “Blues for the River.” He told a story about the dangers of a mine being built near the Menominee River that would poison the river—a major part of Menominee culture. He warned us about the dangers of poisoning water and how we should care for the planet during our time on it. The song reminded me a lot of Jimi Hendrix and Muddy Waters’ “Catfish Blues.” Quintin’s drumming was spot on, driving the song home, and the cello provided a nice bass voice. Fernandez’s guitar wailed and shrieked with the mighty blues. The one problem in this song was that the cello didn’t exactly fit with the heavy blues rock playing, yet because it was turned up so high, it was very harsh and stuck out more than the cello work earlier in the show.

After “Blues for the River,” Fernandez dialed it back a little bit with “Sawenemiyah.” He told us how the Menominee language was dying, and that we should take a little bit of knowledge of it home with us. “Sawenemiyah,” I learned, means “blessings” or “blessed.” Learning this helped me to emotionally engage in the song. While he did have a solo in this song, it was much more lyrically based; Fernandez encouraged all of us to use our voices and sing the chorus with him. Near the end of the song, the background died down so he could hear our singing. The crowd participation, I admit, was a little weak, but Fernandez seemed genuinely happy that there were some who sang along to the beautiful tune.

Throughout the performance, I was struck by Fernandez’s character and amiable nature. He was so happy to be here, share his culture and talk about protecting the planet and our fellow human beings. He and his son had just toured Europe together, and it the close connection between them was made clear by the immense amount of musical chemistry they had. Fernandez conducted himself in a very laid-back way during the performance, telling the cellist what key the song would be in only a moment before it began and often pulling up lyrics on his laptop. In some cases, these might seem to be marks of unpreparedness, but Fernandez’s friendliness and tremendous talent and passion for Menominee culture and music excused these small details and made the event truly special.