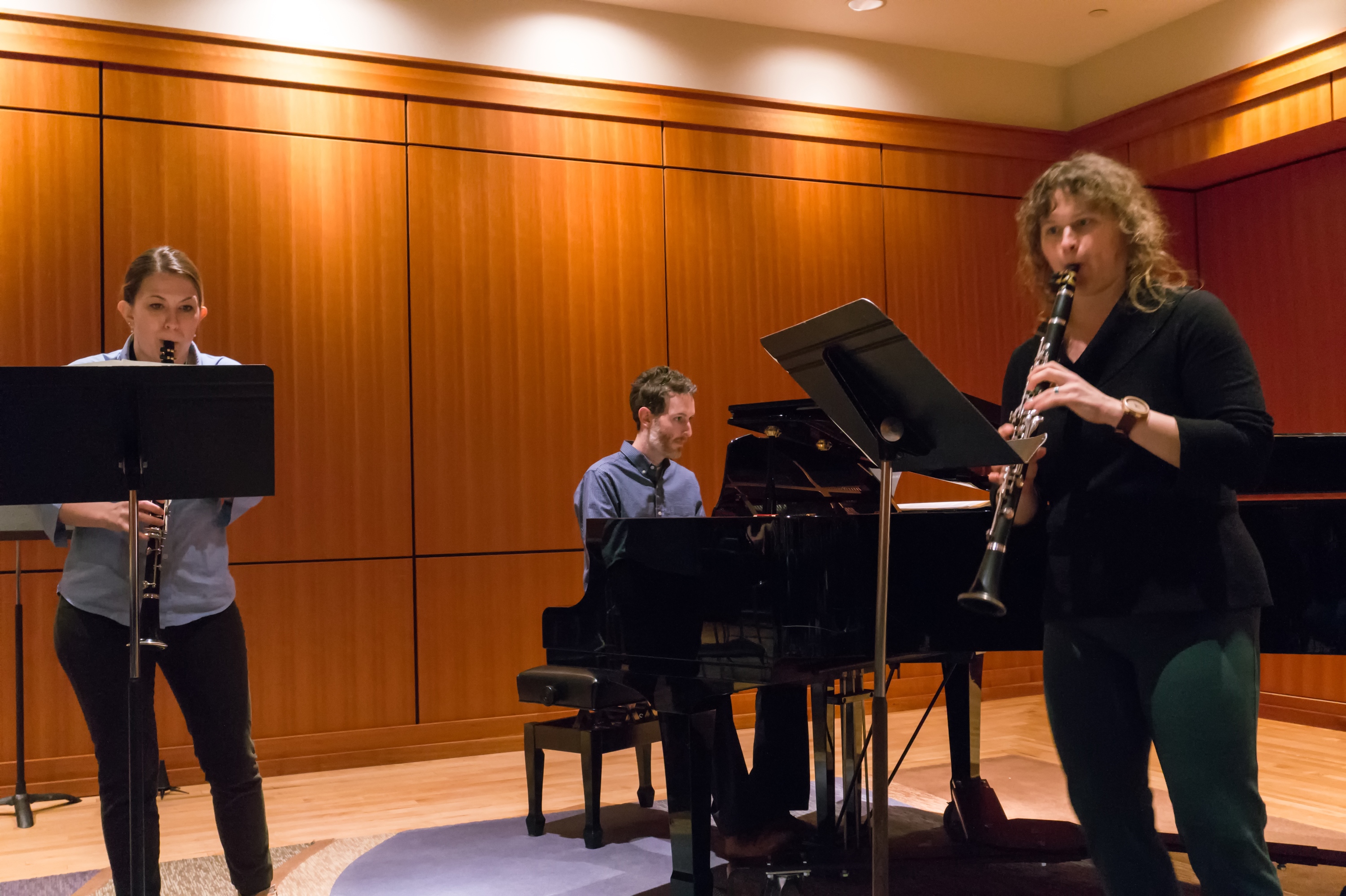 Duo LaRo, a duo of clarinetists, played a concert in the Nathan Marsh Pusey Room at the Warch Campus Center on Monday, Jan. 29 at 7:30 p.m. as part of their 2018 Wisconsin Tour. Associate Professor of Music and clarinetist David Bell introduced members of the audience to the group beforehand, and his clarinet studio attended the performance. Duo LaRo’s name comes from the first names of its two clarinetists: Laura McLaughlin and Rosemary Engelstad. Rosemary’s husband Evan Engelstad also played with the duo on piano, and the group invited the audience to share good trio name ideas with them before playing their first piece.

The group provided a nice change from classical-centric programs by performing mostly compositions by living composers. The first piece they played, “Farewell River Bend” by Chris Thomas, was their first commissioned work, and since the group had only played it twice before, they genuinely asked the audience to give feedback after their performance. The piece included a fast piano ostinato and featured motives that each member of the ensemble passed back and forth. It was an excellent opener.

Next, the ensemble performed “Fire and Ice” by Theresa Martin. Dr. Martin, Associate Lecturer at UW-Fox Valley, was in the audience and had composed this piece as a wedding gift for a couple she knows. This piece, played by Duo LaRo without accompaniment, required them to set up four stands in a row to accommodate the music, which had no time for page turns. Both clarinetists played with elegant phrasing even in the midst of the piece’s turbulent runs. Impressively, they also played the in-unison high passages with incredible intonation.

“Water Voyage” by Alex Shapiro, the piece that followed, was my favorite piece on Duo LaRo’s program. The duo explained to the audience beforehand that Shapiro likes to experiment with electronic music and that they would be playing this piece with an electronic track playing over the sound system. An ambient, almost ominous mixture of sounds ensued, which eventually lead into a bouncing rhythmic groove after the clarinets had joined the fray. The voices of both clarinets melted beautifully into the texture, making me wonder what notation they must be reading from and what close listening they must be doing to achieve such cohesion.

After the intermission, Duo LaRo joined back up with their pianist to perform the first movement of Krommer’s “Concerto for Two Clarinets.” After telling the audience that this work hailed from the late classical period and thus was their earliest existing piece on the program, the duo mentioned that they do not often play older works; they said they like the challenge of performing new music. Krommer’s piece commenced, sounding like a spoken dialogue between friends, which seemed to match the group’s friendly dynamic.

The ensemble finished with another piece by Dr. Martin, titled “Oasis,” and Mendelssohn’s “Concertpiece No. 2.” Once again, each member demonstrated their supreme technical skill and musicality, making frequent eye contact and moving with the music. As always, the group smiled and looked like they were thoroughly enjoying both playing their instruments and performing together.

The ensemble’s performance concluded to enthusiastic applause, and the ensemble and Dr. Martin stayed afterwards to talk to members of the audience. Duo LaRo and pianist Engelstad were very friendly and personable. After talking with Rosemary Engelstad, I learned that she and Laura McLaughlin went to grad school at UW-Madison together, where they decided to form a duo. Since McLaughlin now lives in Wisconsin and the Engelstads live in Pennsylvania, Rosemary said that they typically get together one day before — sometimes even the hour before — their performances to rehearse their repertoire. Knowing this information, the group’s collaboration seems even more impressive and artful. Duo LaRo’s visit to Lawrence provided an excellent example of fine music played among friends. They performed works by living composers, displayed good musicianship, and reminded everyone of the value of friendships made in undergraduate education and beyond.

Duo LaRo performs with accompanist Evan Engelstad in Harper Hall on Monday, Jan. 29. Photo by Taylor Blackson. Duo LaRo, a duo of clarinetists, played a concert in the Nathan Marsh Pusey Room at the Warch Campus Center on Monday, Jan. 29 at 7:30 p.m. as part of their 2018 Wisconsin Tour. Associate Professor of…