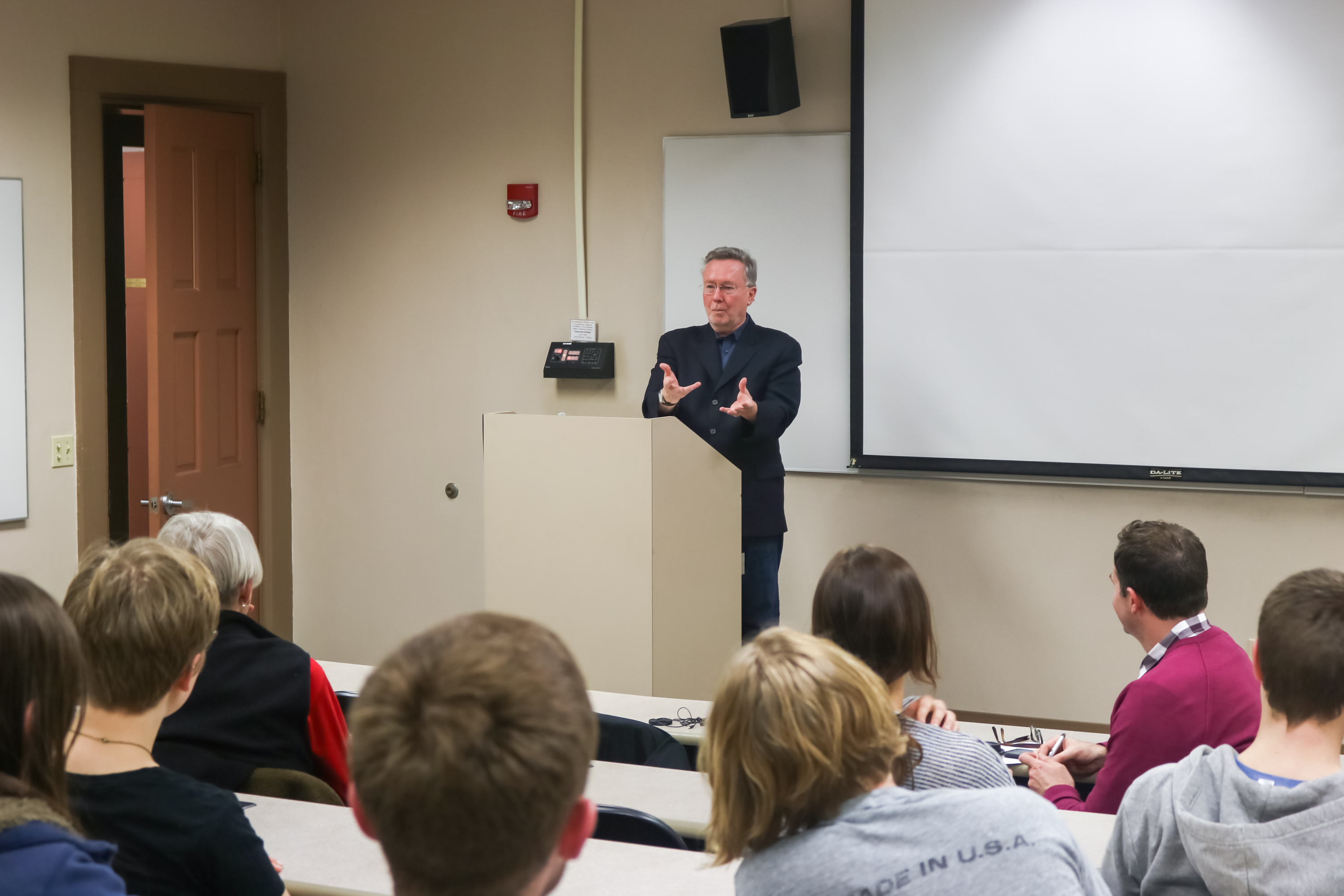 On Jan. 25, James McManus, author of “Positively Fifth Street: Murderers, Cheetahs, and Binion’s World Series of Poker,” conducted a reading and answered Lawrentians’ questions about his writing. In a packed Main Hall lecture room, Associate Professor of English David McGlynn introduced McManus, talking about the author’s numerous works in fiction, non-fiction and poetry as well as his career at the Art Institute of Chicago. After listing off all of McManus’s many accomplishments and contributions to various publications, McGlynn gave the podium over to the man himself.

A studious looking man, McManus seemed rather unapproachable—that is, until he began talking. He talked about his daughter Bea, a sophomore in the Conservatory, and the state of awe he was in while watching one of her voice lessons. McManus then discussed how convenient it is for him to make visits to Lawrence, as it is only a two-hour trip away from his home in Kenilworth, Illinois. After familiarizing the crowd with himself, McManus began to read from his book “Physical: An American Checkup.”

The chapter McManus read from, “The Difference between God and a Surgeon,” was deeply emotional. Telling the story of his young daughter’s eye injury, McManus delivered a calm but heart-wrenching tale of the trials he, his wife Jennifer and their daughter Grace experienced. As he and Jennifer bounce from doctor to doctor, they ride a rollercoaster of emotions — the best being relief, and the worst being despair at the thought that their daughter may not ever see again. Throughout the reading, McManus delivered the story with a sort of calm animation. He sounded desperate when conveying the need for answers and exasperated at the fact this incident occurred at a half-birthday party. One thing McManus did not let the audience forget was his admiration for the surgeon who saved his daughter’s sight. This reverence led into a section of the reading that was more reflective on doctors and society’s views on them. McManus even interspersed jokes throughout the reading, at one point asking, “what’s the difference between God and a surgeon? God doesn’t think He’s a surgeon.” After documenting the stressful night he, Jennifer and Grace went through, McManus ended his reading with their visit to the miraculous surgeon, 46 days later, to remove the stitches from Grace’s eye.

Throughout the entire reading, the audience’s attention never wavered from McManus’s story. Once he was finished, massive applause filled the room along with raised hands for questions. Many asked how McManus chose this particular incident to write about, how to entwine humor into a serious story and how the surgeon would recount the incident. McManus replied with simple, concise answers to each question, saying that he recognizes that “The Difference between God and a Surgeon” is a tough chapter to hear, but it has a happy ending, so it is redeemable. He explained that the humor came naturally as it does in all tough situations; the thoughts just popped into his head, unwarranted. As for the surgeon who saved his daughter’s sight, McManus does not think he would recount the tale as anything extraordinary; he was just a surgeon doing his job. The surgeon’s humility, as well as James McManus’, made this reading special, intimate and pleasantly emotional.