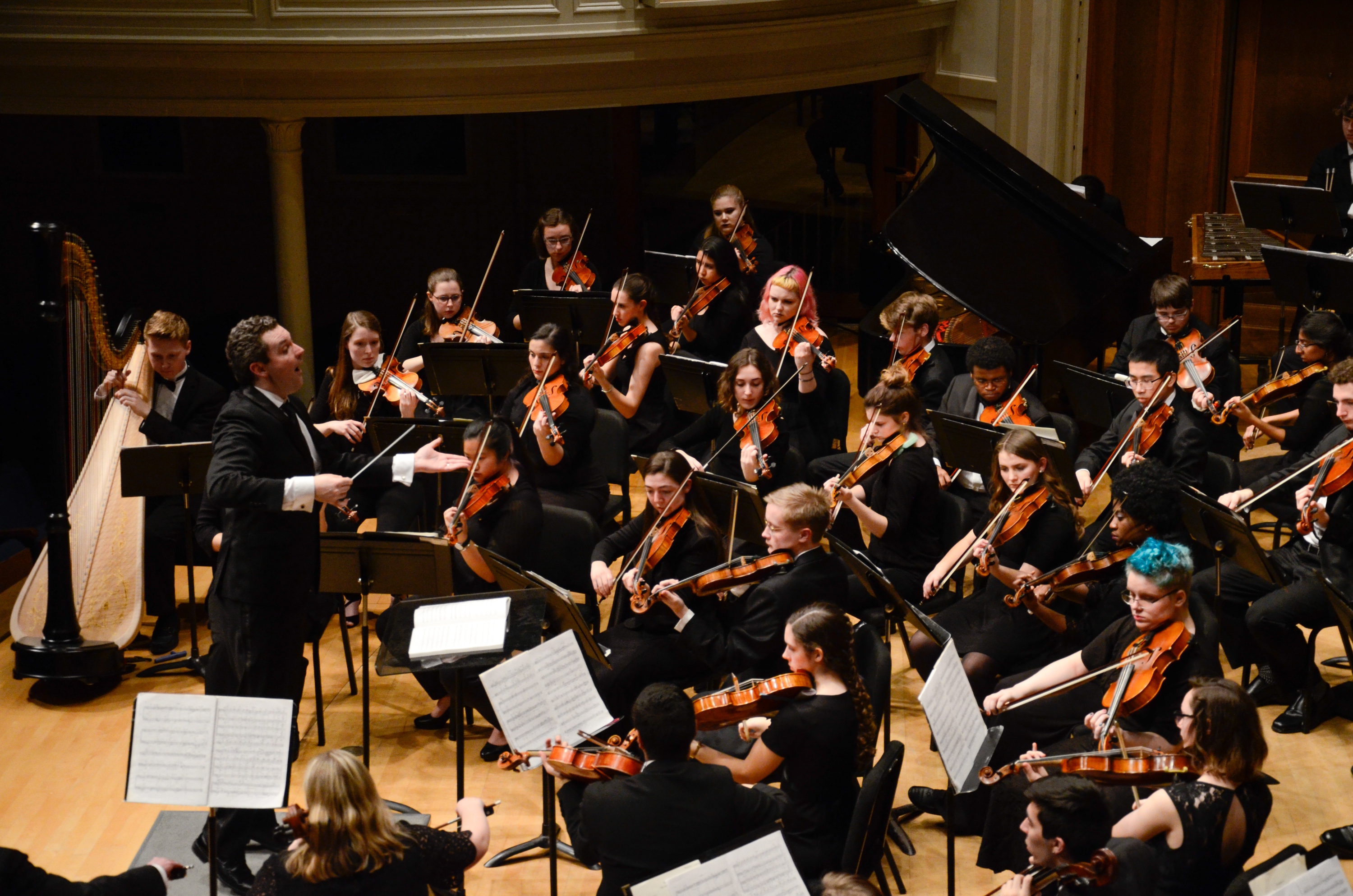 It is not often I go to the large ensemble concerts, but seeing that Debussy’s “Prélude à l’après-midi d’un faune” as well as Rachmaninoff (who I had never really heard—somehow—but only knew from Frank O’Hara’s poems) were on the program convinced me quickly. The Lawrence Symphony Orchestra (LSO) performed “Prélude,” “Symphonic Dances,” which was Rachmaninoff’s final composition, and Arturo Márquez’s popular “Danzón No. 2” in their first concert of the term, titled Symphonic Dances after the central work and focus. The Chapel filled up quickly on Friday night, as many were excited to hear the three well-loved pieces.

The performance began with “Danzón No. 2,” a lively Latin composition that quickly jumped all over the place, exploring rich lyricism, blaring momentum and many sounds in between. A lilting clarinet solo floated above pizzicato from the strings at the start of the piece, overlapping with oboe, gradually ushering in padded winds to cushion the foundation. Soon, lush strings blossomed from the theme, before briefly holding back and then ushering in a driving, intense theme in which the strings, now being very shortly attacked, accompanied by a bright, full brass. The piece did not hesitate in meandering or swerving, its most energetic moments emphasized greatly by the quick builds from its mellow moments. Before the concert, several friends expressed an indifferent or negative attitude to the piece as it is not the most interesting, yet is still performed regularly in youth orchestras, colleges and other settings. Despite it being allegedly overrated, I found “Danzón No. 2” to be an exciting concert opener. At points, I was a bit put-off by its short attention span, but after a few more listens to the Webcast, grew to appreciate its sporadic nature.

“Prélude à l’après-midi d’un faune,” one of Debussy’s most famous works and a favorite of mine in large ensemble repertoire, was the second piece performed at the concert, programmed nicely in between the two wilder works. “Prélude” let the performers and audience soften and loosen, the composition’s atypical (at the time) harmonies soothing to the ears and held out in shimmering textures more rooted in timbre and tone rather than rhythm, melody or other more obvious aspects. The unaccompanied flute intro filled the room with its sound and emotion, warming the Chapel. As the other instruments blended in, I was absentmindedly taken away by its subdued fluidity, as opposed to the previous piece, during which my brain and hand had struggled to keep up and make note of everything happening. This piece allowed me to sit back more and have a soft focus on the pools of sound forming in the Chapel, the writing and natural acoustics mollifying the voices that were so pointed in “Danzón No. 2.” Of course, it was not just Debussy and the architecture that shaped “Prélude’s” beauty, but the musicians as well. With such subtle textures, it is not difficult to go overboard and slip up, but the LSO retained the tranquility Debussy intended very well.

The final piece was “Symphonic Dances,” a three-movement work from Rachmaninoff that contained one of the most moving moments of the whole concert for me. After an unbridled, regal beginning, the first movement melted into an oboe solo and then a quartet with clarinet, alto saxophone and flute, the colors between the four mixing with conviction and some of the strongest emotions throughout the concert. It felt personal, its honesty breathing life into the piece and taking away my sense of time — a moment stretched. The lyrical moment was gently given to nearly all the strings, a fleshed out vocal-sounding refrain that bass instruments and soon many other instruments crept into, darkening and adding weight to the movement. These few minutes — although the entire piece was nearly forty — spoke to me in a way little through-composed music in this environment has. While I enjoyed the rest as well, this section was a standout series of moments and a worthy and touching representation of my favorite aspects of the entire piece. Another moment that stood out — but in this instance, for its unsettling nature — was one of those moments that can only occur in a live setting. As strings quietly brought forth their tremolo, and bass clarinet snuck around barely above them, a baby in the audience was clearly heard sucking its thumb, building a very simple, unintentional but largely unique soundscape that will likely not be repeated ever again. Always pay attention and listen for moments like this.

I wish I had gone to more large ensemble works here during my four years. While I am not necessarily always moved my them in ways which are similar to how I am moved by free improvisation, rock and other genres, I undoubtedly have always taken something away from them, allowing my different backgrounds to shape my listening at these concerts, and vice versa.

The Lawrence University Symphony Orchestra, conduected by Mark Dupere. Photo by Marieke De Koker. It is not often I go to the large ensemble concerts, but seeing that Debussy’s “Prélude à l’après-midi d’un faune” as well as Rachmaninoff (who I had never really heard—somehow—but only knew from Frank O’Hara’s poems) were on the program convinced…