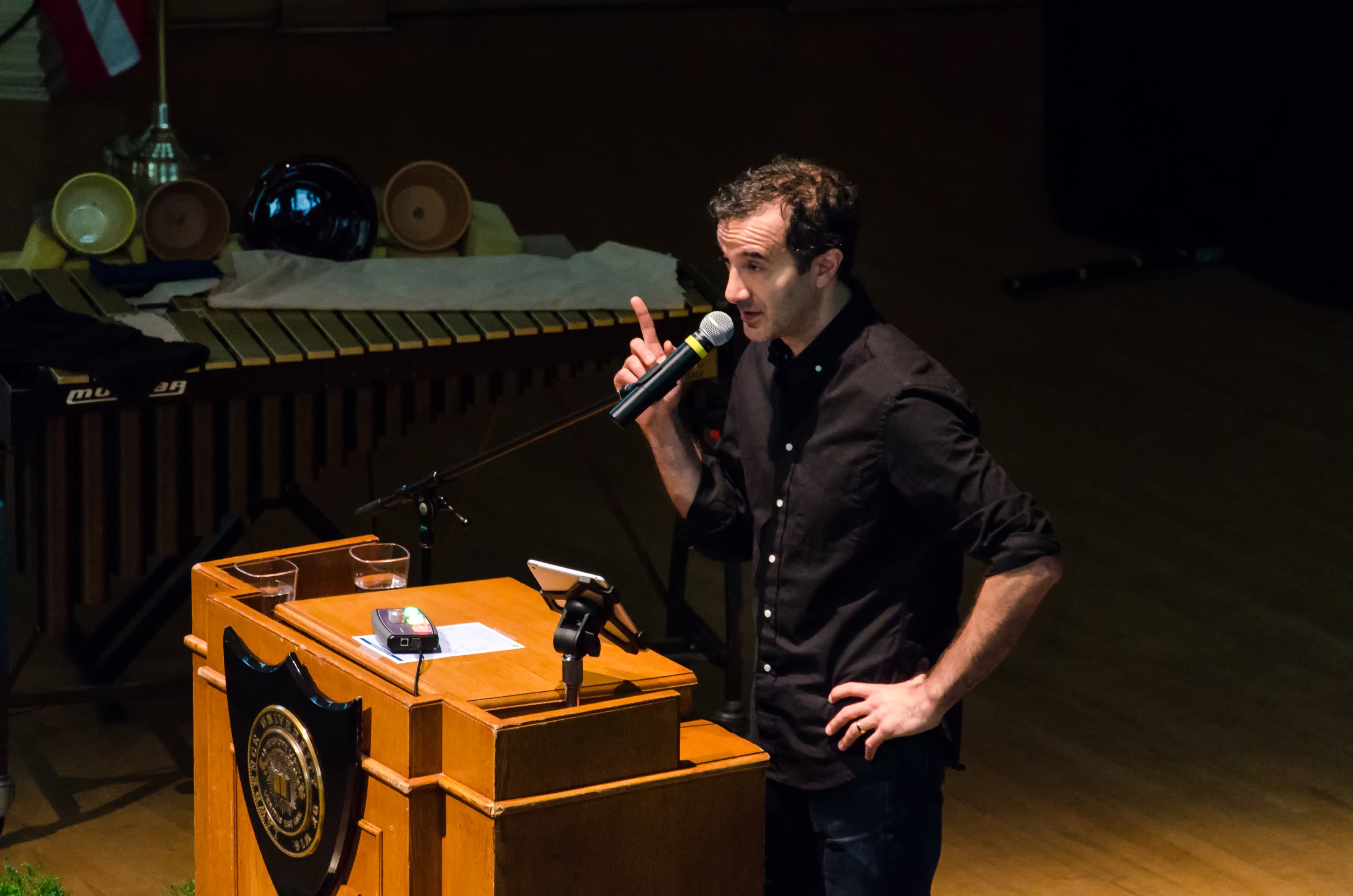 For the third convocation of the 2017-18 academic year, composer, producer and cohost of Radiolab Jad Abumrad presented his lecture “Gut Churn” in the Lawrence Memorial Chapel on Thursday, Feb. 1 at 11:10 a.m. Abumrad is the creator of Radiolab, one of the most popular podcasts in the world, and the recipient of a MacArthur Fellowship, sometimes known as a ‘genius grant.’ His lecture “Gut Churn” focused on the challenges that come with creating something new and how to persevere through those challenges.

Abumrad started his lecture by talking about how Radiolab became successful and how it got its start. Radiolab was started in 2002, but did not become popular until around 2008. According to Abumrad, “The idea with the show was, could we bring an indie movie style to it?” What set Radiolab apart from other podcasts, at least when it was started, was the number of tracks used. Most shows, especially in 2002, would use two to four tracks. Radiolab attempted to use many more tracks of sound simultaneously.

When asked about how the show became successful, Abumrad was not entirely sure. “I don’t have a lot of answers but that’s kind of what Radiolab is about.” This uncertainty about what caused the success of Radiolab is what drove Abumrad to investigate the subject of his lecture.

“What does it mean to go out and carve out who you are?” asked Abumrad. Answering this question produces an anxiety that causes many people to feel sick to their stomachs when going out and trying to do something new. This feeling and the fear of failure that comes with it is the essence of what Abumrad calls “gut churn.”

Creating his own voice was one of the first big steps for Abumrad which caused this feeling of gut churn. He discussed how, when he was starting in radio, he would try to talk and would always end up unintentionally imitating someone else’s voice based off of how he wanted to sound to the audience.

To describe how difficult it can be to find and maintain your own voice, Abumrad told everyone in the audience to sing the note that was most comfortable for them. He had the audience do this twice, and both times he pointed out that eventually everyone ended up on the same note. This activity described how difficult it was to create his own unique voice on the radio and the discomfort that comes with maintaining a unique voice.

Another factor in the gut churn that comes with any creative project is getting to the point of regularly producing work, but that work is not as good as you want it to be. Abumrad described that this is what the first few years of Radiolab were like and described the feeling as the “keen awareness that you suck.”

Abumrad described how this is common, citing a study about how the most well-respected design students would have periods of hating their work, but the key to success was the periods of confidence that came when these students had good ideas. “That negativity has a role, as long as you don’t get stuck,” said Abumrad.

Radiolab starts by asking simple questions, then shows the learning process where things are very uncertain and then asks more in depth questions. Abumrad focused on this uncertainty, saying that when uncertain in anything, the importance is committing to the larger questions and allowing an answer to appear. “One of my deepest convictions as a storyteller,” stated Abumrad, “is that if you ask a question you will find something.”

One of the key concepts Abumrad described in overcoming the gut churn and figuring out how to succeed was something called “adjacent possible.” The adjacent possible is a concept in biology that describes when a chain of acids make a small shift but it is just enough that suddenly the chain is linked together to form a cell wall. Abumrad used this concept to describe how in the creative process there is a key moment that determines what could possibly be the outcome.

In the process of figuring out what can be possible, Abumrad stated that first there has to be confusion and a feeling of being lost, what he called the “German Forest.” This comes from 2004 when Radiolab was essentially canceled and Abumrad had to make a documentary on German composer Wilhelm Richard Wagner’s “Ring Cycle.” This project was massive, incredibly stressful and Abumrad was not sure he would succeed, but the project is what convinced Abumrad that Radiolab could work. While the “German Forest” might be terrifying, Abumrad said venturing into it is a key part of pushing yourself to be more creative and getting to where you want to be in your work.

The next convocation will be held on April 3 at 11:10 a.m. in the Lawrence Memorial Chapel. This will feature author and science Evangelist Ainissa Ramirez who will give her lecture “Technology’s Unexpected Consequences.”