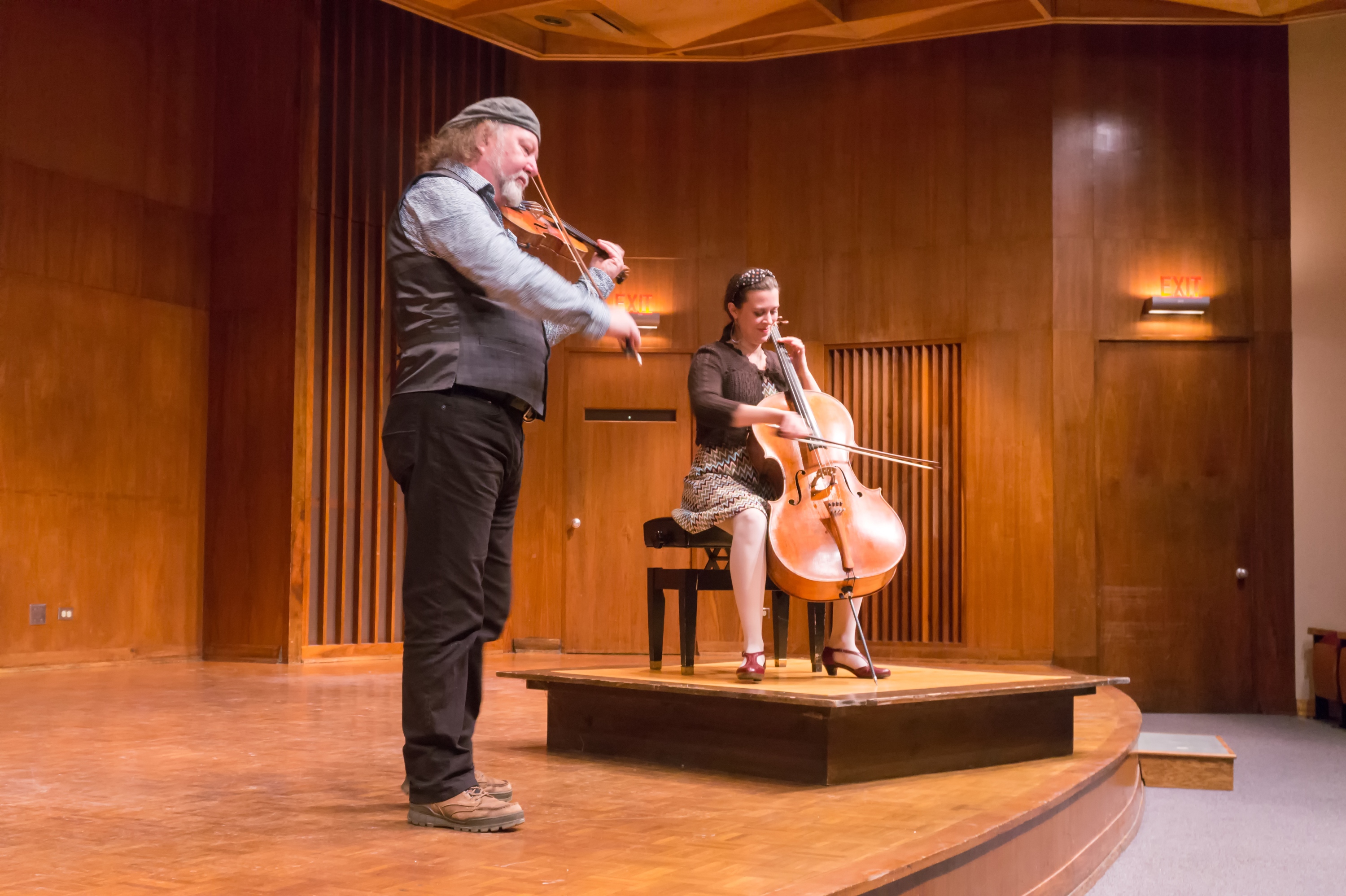 World-renowned fiddler Alasdair Fraser and cellist Natalie Haas are a dynamic duo who have played together for almost two decades. Together they perform all over the world, run fiddle camps, and record award-winning albums. On Wednesday, Feb. 7, Fraser and Haas visited Lawrence University to give a workshop and concert sponsored by student organization Fiddlers of Lawrence University (FLU).

At 4:30 p.m., in the Mead Witter Room of the Warch Campus Center, Fraser and Haas began their workshop. Many Appleton residents and fiddlers from surrounding areas in Wisconsin attended the event in addition to instrumentalist students from Lawrence. Fraser began the workshop by discussing stylistic differences between traditional and classical music. He explained to everyone the importance of playing a tune in an interesting way, which is dependent upon feeling a rhythmic groove in the music.

“You need to become a grooving animal,” Fraser said, and he cautioned everyone against playing with what he called “boring bow,” where one accents the first beat in every measure or half measure and plays safely overall. He spoke at length about the importance of taking chances when playing music, and he put an emphasis upon playing authentically in one style. “How many languages do you speak on your fiddle?” Fraser asked the workshop audience, pointing out that classical music is just one language of many that one can learn to speak.

Haas spoke about the importance of playing different roles in any ensemble. She advocated learning both the melody and chords to any tune so that one can switch back and forth between them. After teaching the group about chords, she taught ‘chopping’ to workshop attendees, which is a technique that involves throwing one’s bow down on the string to get a percussive sound. Haas also emphasized the importance of “destabilizing” the tune with syncopation and other rhythmic techniques while staying within the groove.

Fraser and Haas interspersed their teachings in the workshop with teaching everyone the tune of “Raivlin’s Reel.” Workshop members picked up the tune quickly, so Fraser and Haas invited everyone who would be attending their concert later that night to join them onstage to play the tune as their final number.

That night at 8:00 p.m., Fraser and Haas gave a concert to a nearly full audience in Harper Hall. Once again, many Appleton residents and people from surrounding communities attended in addition to Lawrence students. Fraser and Haas’s collaboration was astounding; both created beautiful tones with such variety on their instruments, and they played so sensitively with one another. One look between them could end a set or start a new one, and they maintained an atmosphere of excitement even as they played perfectly in sync with each other. Furthermore, their stage presence was engaging and personal, and they took time between sets to give background information and stories about their tunes.

Some highlights of Fraser and Haas’s performance included the Scottish tune “Freedom Come All Ye,” which Fraser explained was a contender for the Scottish national anthem and originated from a bagpipe tune. In one set, Haas used a technique called ‘con legno,’ where she hit the wood of her bow on her cello strings to create a sound like a tambourine. Fraser introduced another set by telling the story of his extraordinary travels during one New Years holiday, and in the music that followed, one could hear bursts of unpredictable runs in-between a more laid-back traveling motif that sounded more like the adventures Fraser had just described.

The duo displayed a remarkable range of sounds, and the audience roared in approval after each set was played. Their final piece, “Raivlin’s Reel,” featured students from FLU and workshop attendees who had learned the tune earlier that afternoon. Everyone onstage and offstage enjoyed this number especially, and the concert concluded to thunderous applause.

Fraser and Haas’s visit to Lawrence was a treasure; as a duo they are in high-demand all over the world. They educated both students and community members about many important subjects in music and life in their workshop and concert. They also exuded pure joy whenever they played, positively influencing audience members and musicians alike. As Fraser and Haas taught, the importance of learning to speak a musical language, give back a community their voice and play music with tangible joy is vitally important.

Find out more information about FLU, their upcoming events and meetings at <fiddlersoflawrence.weebly.com>, and check out Fraser and Haas’s website at <alasdairandnatalie.com> for information on upcoming tour dates, albums and more.

Alasdair Fraser and Natalie Haas perform for area locals and Lawrence students. Photo by Taylor Blackson. World-renowned fiddler Alasdair Fraser and cellist Natalie Haas are a dynamic duo who have played together for almost two decades. Together they perform all over the world, run fiddle camps, and record award-winning albums. On Wednesday, Feb. 7, Fraser…