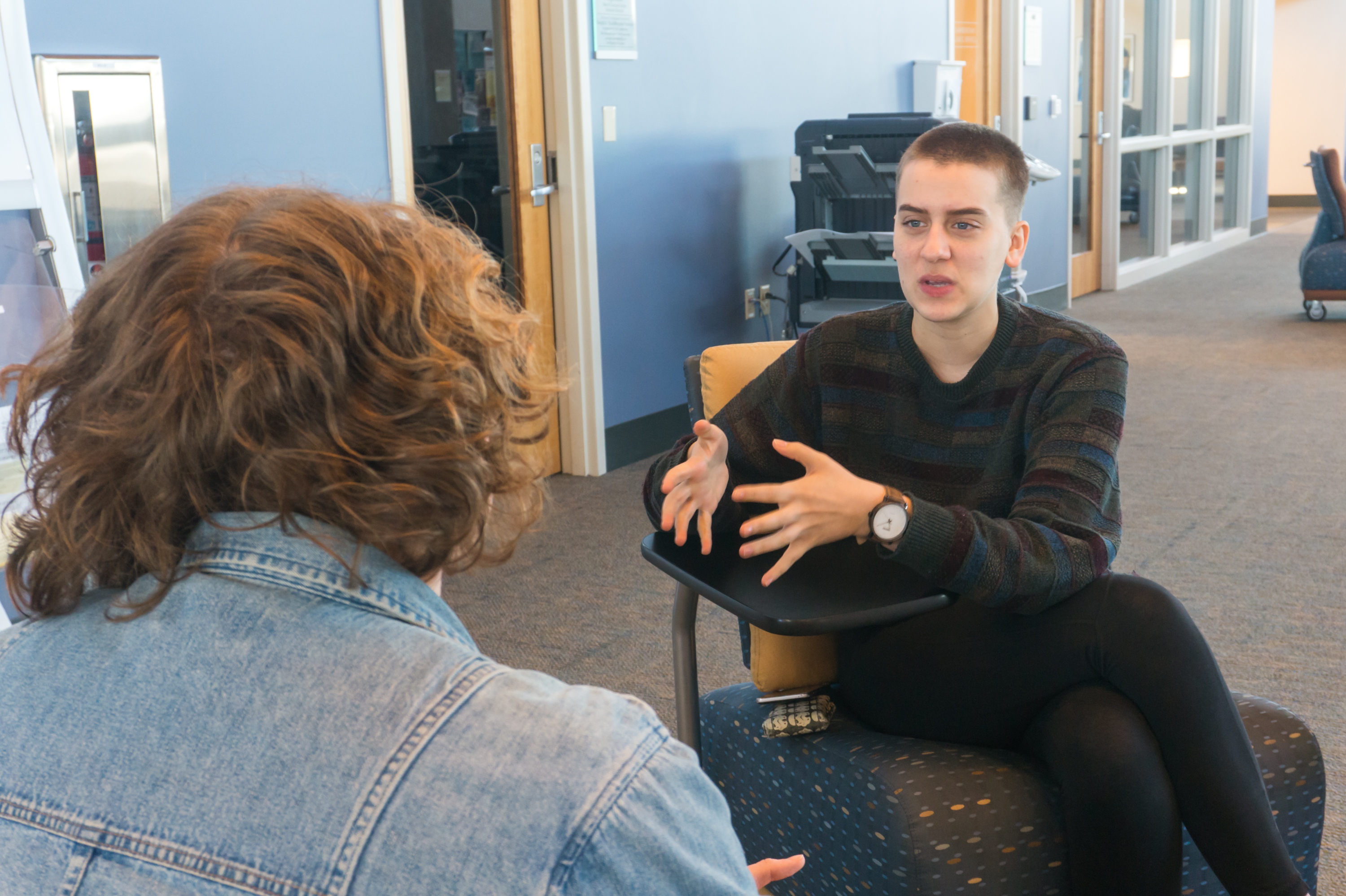 Mathematics major and Gender Studies minor and senior Naomi Oster talks about her experiences as LUCC Vice President and as a high achieving senior at Lawrence.
Photo by Larissa Davis.

Senior major in Mathematics and minor in Gender Studies Naomi Oster is a familiar and bright face around campus. Her role as Vice President in Lawrence University Community Council (LUCC), commitment to service and her interest in big questions all push her to be an engaged and serving community member on campus.

“I think gender studies keeps me sane within the math department and within my life,” Oster stated as she spoke to the importance picking up her minor. Oster continued, “To me, minors should be things that you really want to learn the most about and that you just happen to take enough classes to get it. It should be something you’re passionate about that’s not super stressful for you.”

What is this source of sanity and solace Oster finds in the Gender Studies department? Oster described this source: “There are a lot of ways gender studies keeps me sane. The gender ratio within the math department and overall is not the best. Even though I exist in the math department in a very collaborative sphere because of my peers, I think that math doesn’t always lend itself to organic conversation about intense topics, and I think that is exactly what gender studies is about.”

Oster has been interested in mathematics and physics all throughout high school and came to Lawrence knowing it was what she wanted to pursue. Oster also sees a relationship between her studies in both mathematics and gender studies. She explained, “They intersect in a way that the study of math is about identifying and explaining patterns, and that’s what I do in gender studies too. And in mathematics, there is a lot of feminist analysis that frequently comes up a lot on either the profession of mathematics for women and mathematics in general. So there’s an intersect there.”

As a female mathematician herself, Oster is a week away from finishing her Senior Project in the department. Her project focuses solely on sports statistics, specifically in basketball. She and three other women in the math department have been analyzing data to see if basketball players who make a lot of free throws, or are “streaky,” are better players overall. Oster stated, “There’s a lot of human emotional stock when players are on hot streaks or if they’re unlucky players. Because culturally, we think of players who are streakier as better players. It was interesting to me and it really involved a bunch of research, making models and writing a summary of what I’ve done over the term.”

These basketball players are not the only people with a streak, as Oster is about to complete her year-long streak serving as LUCC Vice President on campus. Oster stated, “It’s been incredible to have this opportunity. It really taught me how to be an advocate and how to approach leadership with care and consideration. Being a leader in LUCC has allowed me to be an advocate for more people and to learn how to navigate all of that; letting myself be educated and learning how to bolster people’s voices. Getting to really feel like people trust me has been incredible.”

Oster made it clear that at first, she never saw herself running for any sort of position in LUCC. Oster explained this as she stated, “I think whenever people start at Lawrence and meet these juniors and seniors who are doing incredible work you think, ‘I’m never going to be able to get there.’ You think you’re never going to be inspiring or work as hard or be as knowledgeable as the people you meet. But now I feel like I’m coming close. That’s really special, I never thought I’d be here.”

Oster believes what got her to the point she never thought she’d achieve revolved a lot in just being present. Oster said, “It’s a lot of saying yes and focus. If you have a topic that you’re passionate about and there’s already a framework and people who care, then just show up. You don’t have to run anything you just have to show up, and you’re involved. Saying yes when people ask for help is how you get to be productive.”

One of the first moments Oster was inspired to be present on campus took place during her freshmen year. Oster stated, “There was a Black Lives Matter lie-in outside the [Andrew] commons. A group of activist-students of all different backgrounds across campus laid on the ground in front of everyone. When I saw it, my roommate and I looked at each other and we realized we had to get involved. These people were passionate about something, and we know nothing about the culture on this campus for students of color. So I found out when the [Committee on Diversity Affairs] CODA meeting was and I went. And I got to be inspired by so many students doing so much good and important work.”

While this work in being present might seem a little too stressful to balance with the rest of school life, Oster stressed that it’s about quality over quantity. Oster stated, “You don’t need to get involved in everything. If you find something you’re passionate about, you can put a lot of care into doing it and do it well.”

All in all, Oster has committed her time here at Lawrence to putting herself into new situations, asking questions that need to be asked and offering herself and her listening to others. She is certainly one of the high-achieving seniors at Lawrence. As a high-achieving senior, she offers one piece of advice, “Work to be less stressed, be less cynical and know that people want to be on the same page. There are always people here who are willing to help.”