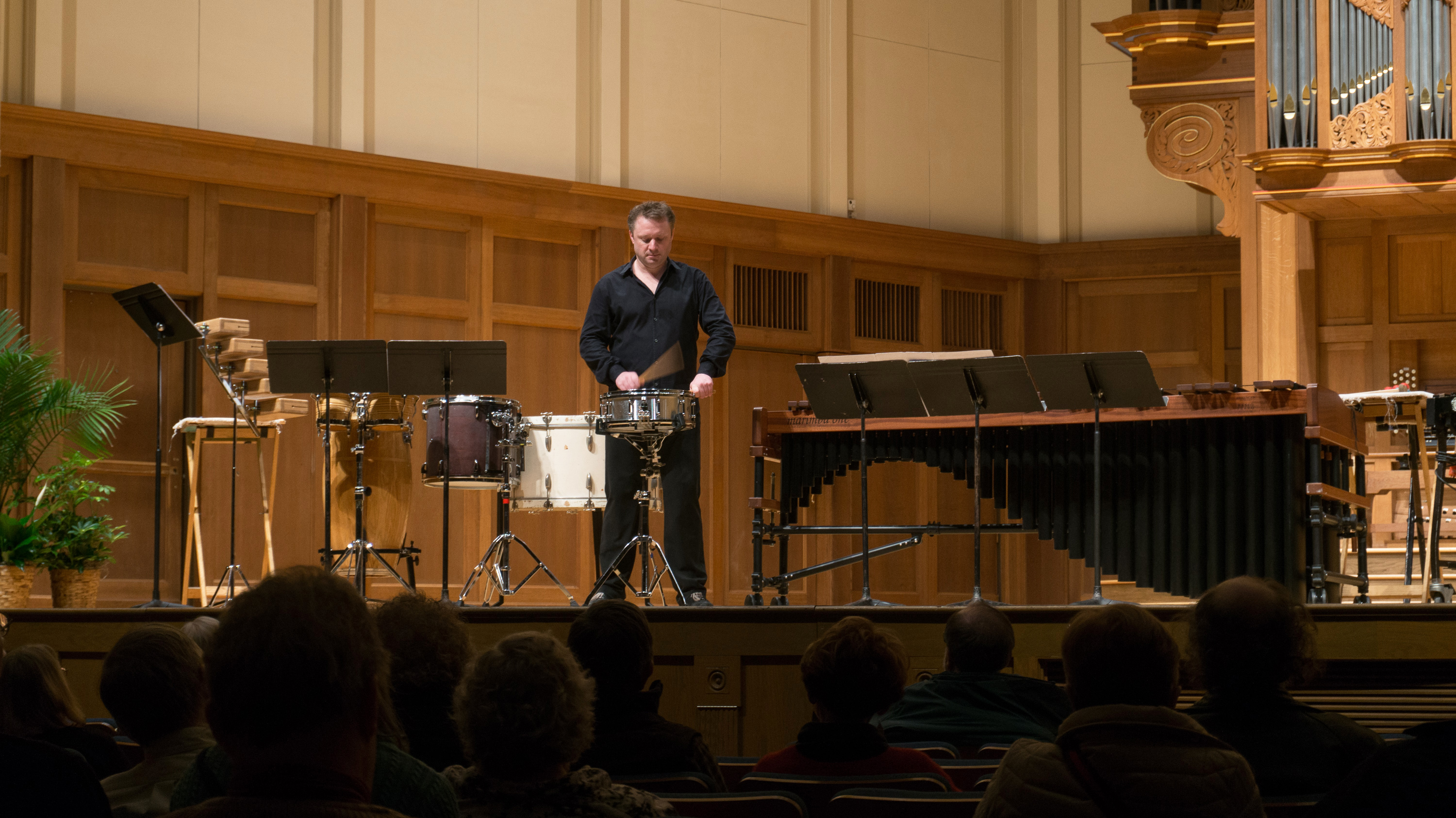 On Friday, March 30, Lawrence Memorial Chapel welcomed famed percussionist Colin Currie as part of Lawrence’s Artist Series. Before the performance began, Currie stated that the recital’s goal was to showcase modern percussion masterpieces by both popular and lesser-known artists. His program notes stated, “This allows an uninterrupted investigation of concepts of time and pacing in musical structure, with pieces that interlink and illuminate each other.” His quote summarizes the essence of the recital exceptionally well. As Currie alternated between several different percussion instruments throughout the night, his goal of exploring time and pacing in modern music was achieved.

The first half of the concert was a 30-minute continuous flow of four different songs. It was nearly impossible to differentiate where one song began and the following ended. In a solo percussion piece entitled “Fire over Water, from I-Ching” by Per Nørgård, Currie’s arms and legs worked in a machinelike manner, while still maintaining a certain gracefulness. The fortes in this piece were earsplittingly loud; Currie put on an arresting and impressive performance. During a lull in the barrage of volume, I could hear him panting from exhaustion. At one point, he made a small slip-up before a particularly long and fast run on the marimba. It is comforting to know that even some of the most renowned musicians in their fields make mistakes every once in a while.

After a brief intermission, Currie announced that one of the next pieces, “Vibra-Elufa,” was written by Karlheinz Stockhausen. The audience made a comical and exaggerated gasp — most of them recognized the name of this notoriously wild, shocking and innovative composer. However, the song that followed this dramatic announcement was surprisingly tame compared to what I was expecting. Nonetheless, its melody was striking. Currie ended the night with “Realismos Mágicos” by Rolf Wallin. The eleven songs within this piece are named after short stories by Gabriel García Márquez. Some of the songs were a few minutes long, while others lasted for ten seconds at most! In the short gap between each song, Currie comically announced their eccentric names; this added a touch of charm to the performance. Each piece had a character and energy of its own, and one could imagine what the dialogue or plot within each piece could be. These imaginations were made possible through the captivating talent of Currie.

After this last piece, Currie received a standing ovation and quickly returned to the Chapel’s stage for a short and dynamic encore on the snare drum. The crowd roared its approval after the recital ended — clearly Lawrence University adored the enthralling performance of percussionist Colin Currie.