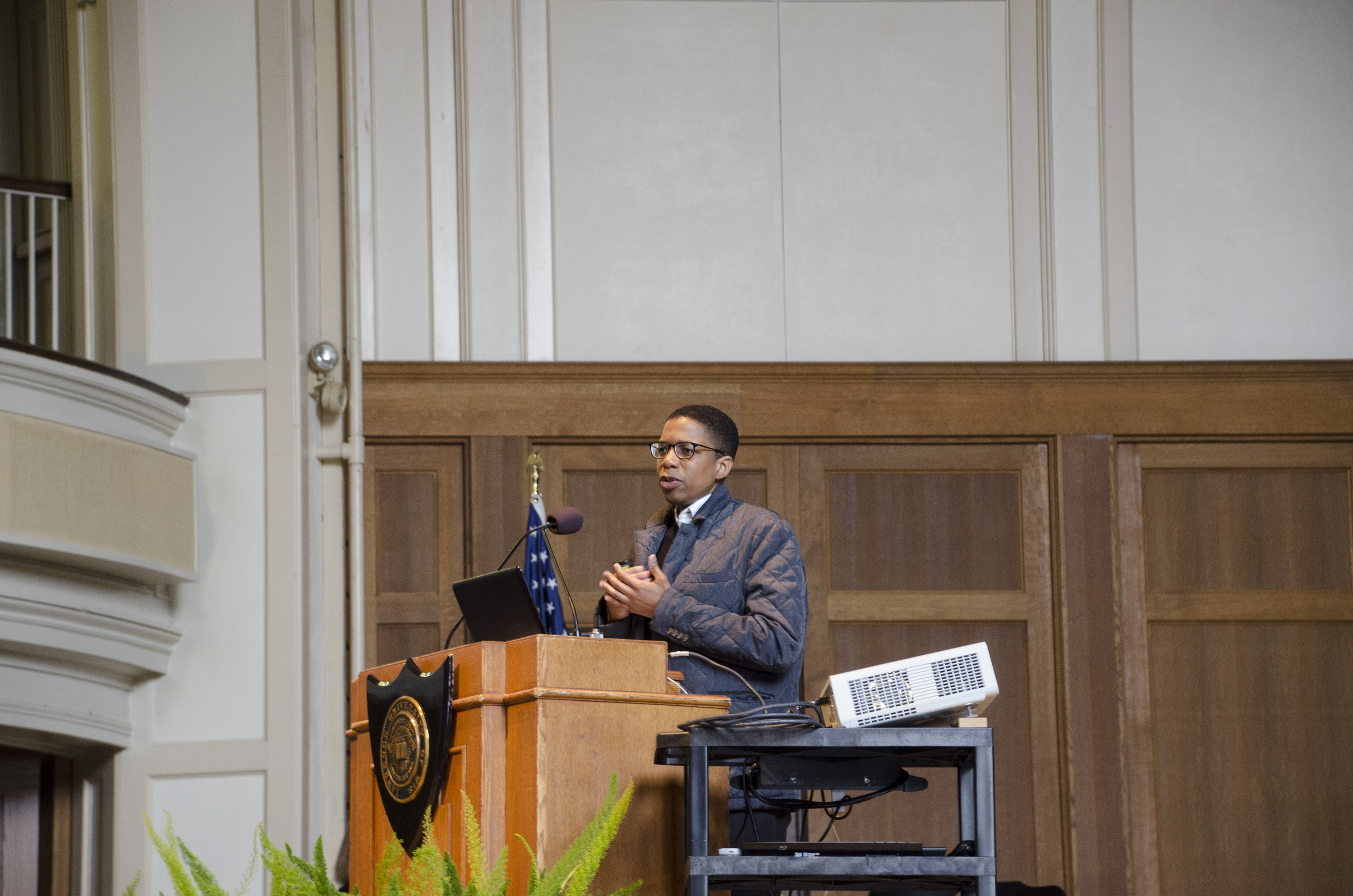 In her talk, “Technology’s Unexpected Consequences,” Ainissa Ramirez used examples to illustrate how technology has influenced us.
Photo by David Baldwin.

The event began with a prelude by Lecturer of Music and University Organist Kathrine Handford, who played “Prelude and Fugue in G Major” by Johann Sebastian Bach on the chapel’s organ. Next, Junior Christian Vallery performed “Sechs kleine Klavierstücke, Op. 19” by Arnold Schoenberg on the piano.

The audience was welcomed by Walter Schober Professor of Environmental Studies and Professor of Geology Marcia Bjornerud.

Bjonerud also introduced the headliner, Ainissa Ramirez, Ph.D., describing her as a “real life Ms. Frizzle without the child endangerment.”

Ramirez, a material scientist and author, has given many talks around the country, including a TED Talk where she demonstrated the fascinating qualities of memory wire. Memory wire is flexible and can be twisted in an infinite number of ways but when heated will always revert back to its original shape. Ramirez explained that this is due to the special way that the wire’s atoms transform.

The wire demonstration had two purposes. First, it showed the audience the amazing materials that impact our daily lives without our even knowing it. Memory wire is used in robots, bras and even braces.

It was also meant to prove that Science, Technology, Engineering and Math (STEM) education can be fun and exciting. Ramirez argued that there needs to be more scientists and STEM education, because STEM thinking creates a generation of problem solvers that the world desperately needs.

According to Ramirez, technology is a force that shifts the world in both positive and negative ways. While humans change technology, it also changes us. As Ramirez put it, “You are created by your creation.”

Ramirez has published several books. These include “Save Our Science,” an appeal to better STEM education in the United States, and “Newton’s Football,” which is described as an exploration of “the unexpected science behind America’s Game, from why woodpeckers don’t get concussions to why coaches act like primates when it comes to risk.”

In her talk, Ramirez used the history of football as an example of human behavior being changed by technology. The introduction of face guards on football helmets actually resulted in a “weaponization of the helmet,” leading to more concussions than before.

Ramirez emphasized that you do not have to be a typical scientist to be an inventor. As proof, she explained the history of the telegraph. Samuel F. T. Morse, the inventor of the telegraph and the namesake of Morse Code, was an American artist and portrait painter. Sad circumstances in his life led him to pursue the creation of an instant communication network. The result of this pursuit, the telegraph, became the foundation for the radio, television, telephones and internet that we enjoy today.

Another example of technology that changed us was the light bulb, pioneered by Thomas Edison.

Ramirez posited that among other things, the light bulb actually made us taller than generations before due to the blue light in bulbs, which is similar to elements in sunlight that tell our brains to grow.

Ramirez reminded the audience that there is always a cost to technology. Each individual smartphone requires 64 elements to make, dozens more than computers of the past. This need creates industries of mining and manufacturing that damage the earth and lead to human hardship elsewhere. For Ramirez, the conclusion is clear: “We have a power with technology but also a responsibility.”

Ramirez’s talk concluded with a brief question and answer session with the audience.