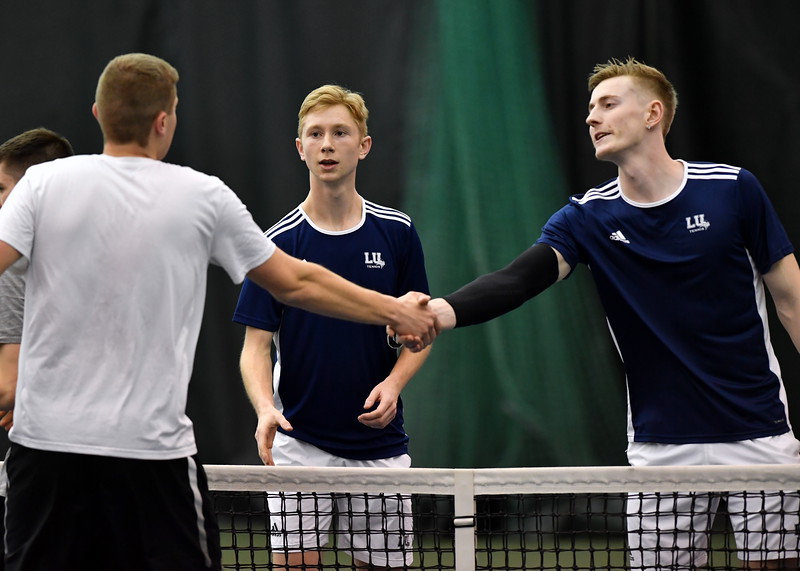 Adding some much needed warmth to this past weekend, the men’s tennis team won by over seven points in both their games against Illinois College and Knox. While most Lawrentians may have been cooped up in their rooms, watching a movie and sipping hot chocolate to stay warm, the men’s tennis team was hard at work. The Vikings traveled to southern Illinois, where their first match was played against Illinois College. That Saturday, the Vikings won 8-1. However, in an interview with sophomore Connor Maloney, he stressed how difficult the match was for him, but how he and his partner, senior Bill Schuman-Kline, overcame that obstacle and won their match. Maloney said, “I think my doubles match was the most challenging for me. Illinois College’s doubles pair was a formidable opponent. They did not make very many mistakes, so it forced [Shuman-Kline] and I to be more offensive with our play.” An athlete’s ability to shift their style according to their opponents is imperative, but also not an easy task to do. However, Maloney and Schuman-Kline’s flexibility is what made them the stronger of the pairs, which then led them to victory. The next day, the Vikings traveled two hours north to Knox. As Maloney recounted, Knox was not as tough of a team as their most recent opponent, Illinois College. He said, “Illinois College’s doubles teams were definitely stronger than Knox’s. This forced us to be more disciplined. We could not afford to miss as many shots as we did against Knox.” Though Knox was an easier team to beat, the Vikings did not get overconfident, nor did they let their opponent score any points. At the end, the Vikings posted a 9-0 shut out. When interviewing head coach Steven Francour, he commented by saying, “Knox was a great performance, especially by [sophomore] Andrea Arrivella. His opponent presented some unique challenges and he handled them with ease.” The Vikings then checked another win off of their list and jumped back onto the bus to go play at their final destination, Monmouth. Despite the fact that the first two games of the weekend went smoothly – the Vikings’ opponents were no match – the third team posed a real challenge. Was it because Monmouth is a stronger opponent compared to Illinois College and Knox? Could the Vikings’ game have been thrown off by the weather or the fact that they had to play inside? Maybe the answer was more simple: the Vikings had been traveling all weekend and played two games already, with one being on that very same day, and for whatever reason, the game was a nail-biter. The Vikings lost two out of the three doubles matches, and were starting to trail behind, but the team pulled together, until, finally, the scoreboard read 4-4. Now it was all up to Maloney. Even with the possibilities of victory or defeat pulsating through his hands, Maloney took hold of the situation and did not dare to blink. He ended up winning the match 6-2, making the overall score 5-4, with yet another win for the Vikings. Coach Francour commented by saying, “It was impressive to see the team persist and capture the win. For the future, we still need to remain focused mentally and continue to improve.”

Sophomore Connor Maloney (left) and senior Bill Schuman-Kline (right) have proven a formidable doubles team. They went undefeated over the weekend. Photo courtesy of Paul Wilke. Adding some much needed warmth to this past weekend, the men’s tennis team won by over seven points in both their games against Illinois College and Knox. While most…