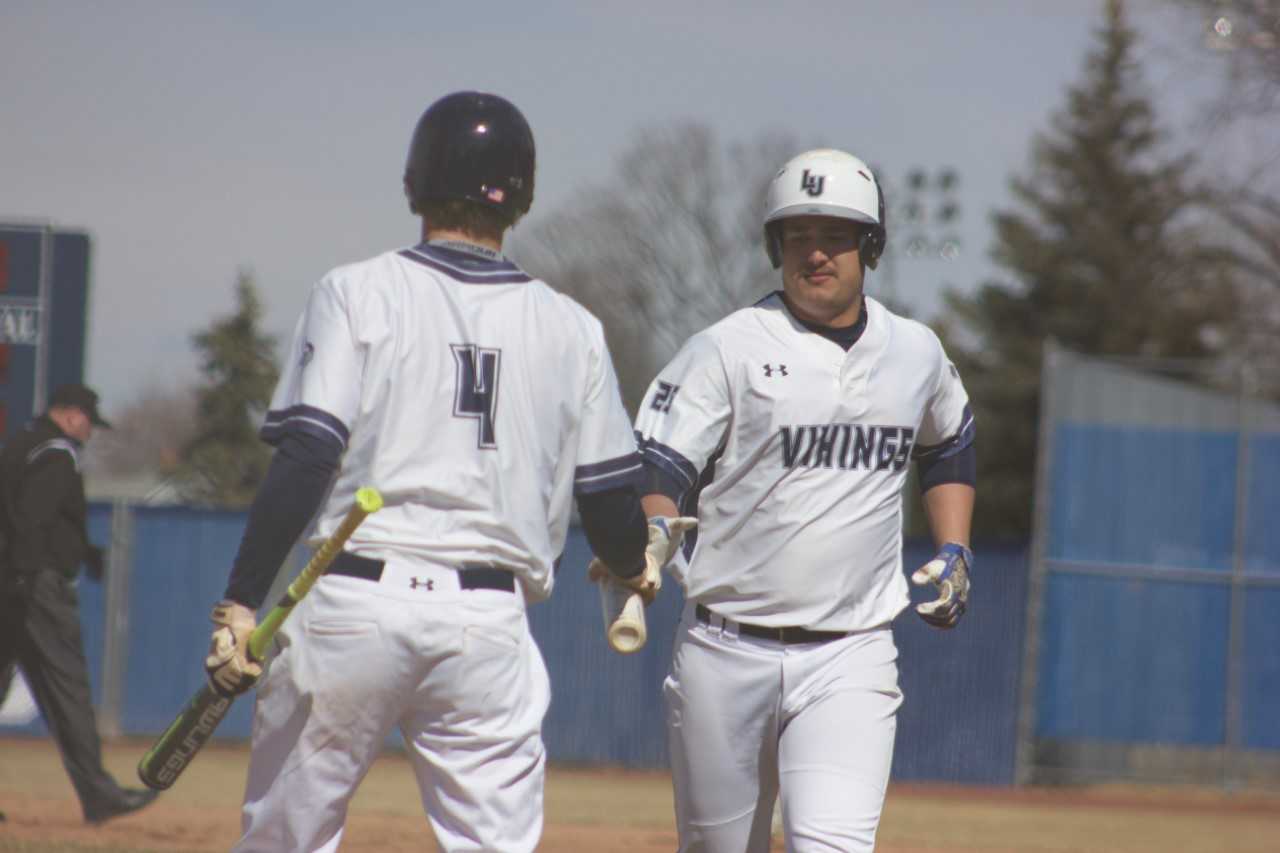 Clutch, dependable, and inspirational are all words frequently used to describe senior baseball player Matthew Holliday. Throughout his four years starting for Lawrence University’s baseball team, Holliday has continually wowed fans with his performances in the field and at the plate. This last Thursday, April 12, he did it all over again with a beautifully timed walk-off single to break the RBI (Runs Batted In) record, boosting the Vikings to a win over Ripon College. Upon breaking this record, Holliday has now become one of the best hitters Lawrence University has ever seen. Over his collegiate career at Lawrence, Matthew Holliday has a .373 batting average, 167 hits (having already broken the career hits record at Lawrence), 40 of those being doubles, and a .513 slugging percentage. All of these numbers come together to mean that he hits the ball hard, and he hits the ball often. His numbers are impressive, but this success doesn’t just happen overnight. He had to work for it his entire life.

When he was younger, Holliday played a lot of sports, but it wasn’t until he saw baseball on television that he said, “That’s what I want to do.” At age seven, Holliday picked up a bat, knew he wanted to be serious about it, and started working toward building up his prowess at the sport. At such a young age, Holliday started playing in community baseball, worked his way through little league and kept fine-tuning his playing abilities.

Throughout the recruiting process, he looked at a lot of schools, but while attending a scouting camp called “Head First” in Long Island, he received a text from head baseball coach Jason Anderson asking if he had ever heard of Lawrence. He hadn’t. However, after visiting, chatting with Coach Anderson, being offered a starting position and getting to know some future teammates, he found himself committed to Lawrence University to play baseball.

Growing up, people tend to idolize the professional players. However, Holliday says that he never did, but does find role models within the game. He admires the big names like Mike Trout of the Los Angeles Angels, or former New York Yankee Derek Jeter. Mark Teixeira of the New York Yankees is especially inspirational to Matthew for his insane first baseman abilities, and he tries to apply little things he learns from watching him play to his own performances at first base. While these professional players have shown their own form of inspiration, Holliday says that he gets the most from his father.

Holliday has obvious gratitude for his father’s role in his baseball journey. He said that all he told him was, “This is what I want to do.” His father’s response was, “If you’re serious, and this is what you want to do, I will help you in every way I can.” A soft reminiscent smile painted Holliday’s face as he explained how his father has been his coach and number one fan since day one. Having that support, coaching and inspiration from his dad continues to fuel Matthew’s desire to play and love for the game. Having this intense love for the game has led Holliday to experience all that baseball has to offer, from the good memories to the injury battling moments.

Well on his way to breaking a single season hit record his sophomore year, Holliday was beamed in the hand with a hit up the middle while pitching. This injury required surgery and took him away from baseball, creating a slight set back. However, while this pushed him back in the moment, he says that it made him “want to come back and play the game even more.” Now, he is in his final season having already broken two career records, and has half of his season left to play.

Success has been associated with Matthew for the majority of his baseball career. One of his fondest memories actually takes us back to a 12-year-old Matthew Holliday, one win away from the Little League World Series. While his team lost in the finals, it continues to be one of the “biggest moments of [his] life.” These are the moments he plays for. He loves to play sports of all kinds purely for the feeling of winning. “I love the feeling of winning,” he said. “You always have the opportunity to do something that has never been done before. That’s what I love about sports, because you can do that.”

Holliday went after the hit record with all he had, and once he obtained that goal, a little of the pressure came off. However, while he didn’t think too much about the RBI record, once clinching that record, “the monkey was off [his] back” and he’s been able to relax even more and focus on continuing to perform and support his team with his bat and his glove. He is able to take a look back at his four years playing Lawrence baseball and say, “Wow, I did this for all four years, and now finally I can say that I did this.” The fact that Holliday got to pair this record-breaking moment with his first ever walk-off made the moment even more awesome and special for him.

With half of his final season playing Lawrence Baseball, Holliday continues to work hard and get better. When he steps on that field, he is there to support his pitcher, talking him up from first base, reminding him that the defense has his back with every pitch. If a ball comes his way he is “going for it no matter what, 100% every single time.” When he steps into the box as the third hitter for Lawrence University, he feels the pressure, but instead of letting it get to him, he lets it fuel him. When he steps into the box and the opposing pitcher is throwing him a bunch of breaking balls, it shows that they respect him as a great hitter. He gets into the box, expects the movement, and goes after it with determination. That is how he has earned his place on the team and the respect of his opponents.

Congratulations on breaking the school record for RBIs, Matthew. You will most definitely go down in history at this school. The next home games for Lawrence Baseball are scheduled for Sunday, April 29 at 1 p.m. and 3 p.m. against St. Norbert College. Come out to support the Vikings and see Matthew Holliday in action.