Theater department to present “The Storm or ‘The Howler’ 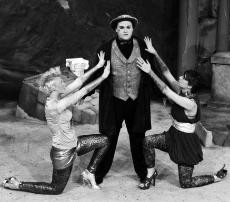 Around 211 B.C. the Roman playwright Plautus, father of slapstick humor, wrote “The Rope,” a timeless comedy riddled with pirates and pimps. 2,221 years later, in the year 2005 A.D., Peter Oswald introduced his new translation, or “mis-translation” according to Oswald, of Plautus’ play, titled “The Storm or ‘The Howler'” at Shakespeare’s Globe Theatre in London.
Oswald extracts and develops a part of Plautus’ “The Rope” for his adaptation. The play appropriately begins with a giant storm that causes two pimps and their prostitutes to be shipwrecked while trying to swindle a man out of his money and the woman he loves.
A priestess of Venus takes them in, and mayhem ensues. Other characters in the story include an unmotivated businessman, a not-so-bright lovesick man and meddlesome celestial beings.
The play could be described as an R-rated “Gilligan’s Island,” filled with discovery, innuendo, revenge and love, and told in an interesting combination of verse and prose.
“The Storm or ‘The Howler'” could brighten your day at Lawrence for two hours Feb. 18, 19 or 20. The director, Kathy Privatt, describes it as a “funky little romp of a play.” Privatt warns that audience members wishing to remain quiet observers should avoid the front row.
Zach Garcia, who plays Daemones, an emotionally conflicted, indecisive businessman, says, “No one in the audience is safe.”
So if you are looking for a night filled with laughter and surprise, join the fun of “The Storm or ‘The Howler'” Thursday, Friday, or Saturday at 8 p.m. in Cloak Theatre or at 3 p.m. on Saturday for a matinee performance.
Tickets are free for Lawrence faculty, students, and staff, $10 for adults and $5 for seniors and students. 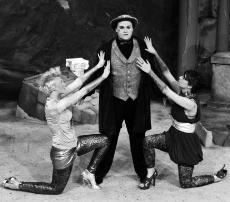