Softball’s final rally of the 2018 season 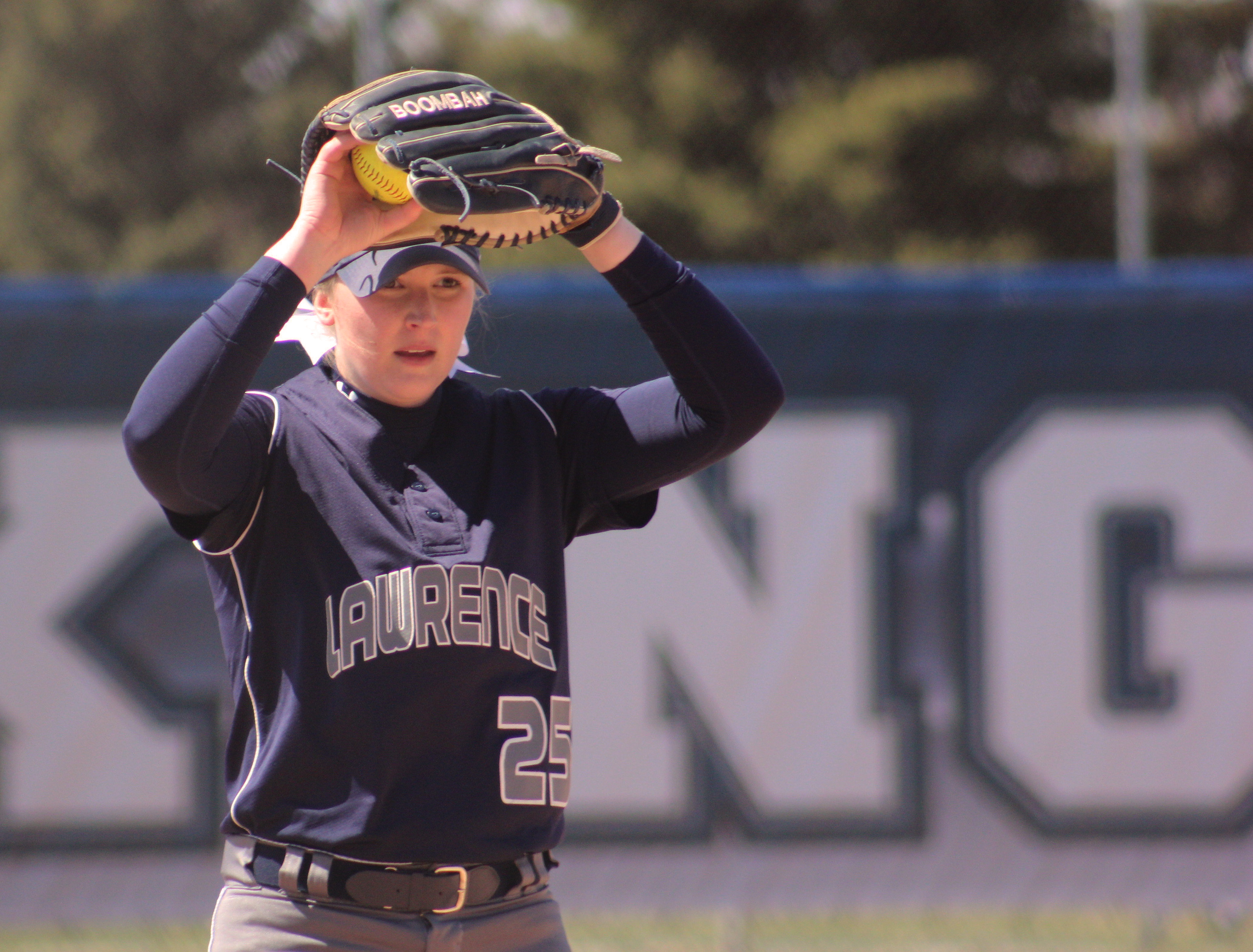 Rachel Urich smiles back at her teammates, who are returning a full roster aside from third baseman and senior Kori Looker.
Photo by Caroline Garrow.

The Lawrence University softball team had a busy week of games to close out their 2018 season. The action kicked off as they hosted St. Norbert College on Wednesday, April 25, and Knox College on Thursday, April 26. They got one day of rest before traveling to Janesville, Wis., where they took on Cornell College on Saturday, April 28. They closed out the season by hosting Illinois College on Sunday, April 29.

Against St. Norbert, both games needed extra innings to be decided. The first game was at a 1-1 tie after the first inning, as Lawrence’s run came off of an RBI by freshman Ceara Larson. In the third, junior Madeline MacLean homered to give the Lady Vikes a 2-1 lead. In the bottom of the eighth, sophomore Lexi Angemi hit an RBI walk-off single that scored sophomore Maria Reiter to give Lawrence the 3-2 victory. St. Norbert jumped up to an early 1-0 lead in the second game, but Reiter hit an RBI-single in the fifth to tie up the game. Each team scored a run in the seventh, Reiter picked up her second RBI of the game with a double to right center field, sending this game into extra innings. In the ninth, St. Norbert scored and took the second game 3-2.

The next day against Knox College, Lawrence got off to a slow start as Knox took a 2-0 lead in the fourth. The Lady Vikes responded with a run in both the fifth and the sixth innings off of an RBI-single by freshman Liz Jonjak and a Knox error. However, Knox also scored a run in the sixth and two in the seventh to win the first game of the doubleheader 5-2. In the second game, the Lawrence offense was on fire. After giving up four runs in the second inning, the Lady Vikes came roaring back. They started by scoring two runs in the bottom half of the inning as Jonjak hit a two-run homer. Lawrence added another five runs in the third started by an RBI-single from senior Kori Looker that scored two. Junior Sophie Pedersen followed that up with an RBI-single of her own and then junior Rachel Urich reached on a fielder’s choice, scoring Looker. The last run of the inning for Lawrence came as sophomore Amanda Karnatz’s ground-out scored Pedersen. The Lady Vikes tacked on another run in the fourth to make it 8-5 off of a single by MacLean. In the fifth, Larson single-scored two, making it 10-5. Lawrence would add three more in the sixth as Urich grounded out, scoring Looker, Karnatz hit an RBI single and Reiter hit an RBI-triple. This pushed the score to 13-5 and Lawrence won the game by the eight-run rule. This win also marked the 500th win for Coach Tatro at Lawrence.

On Saturday, the Lady Vikes offense struggled in the first game of the doubleheader against Cornell as they were shut out 4-0. In the second game, Cornell also got out to an early 1-0 lead in the first, but Lawrence countered with a run in the fourth off a MacLean single to tie the game at one. Cornell added two runs in the fifth, but in the seventh, the Lady Vikes added two of their own as Jonjak hit a two-run homer to tie the game again at three. In the eighth, MacLean hit her second RBI-single of the game and Angemi grounded out, scoring Larson to give Lawrence the 5-3 win in extra innings. Sophomore Emilia Jackson pitched a complete game and struck out four.

The Lady Vikes struggled in their final doubleheader of the season against Illinois College., losing 9-0 in the first and 7-4 in the second game. Illinois College scored an early two runs, but the Lady Vikes cut into that lead as Karnatz scored on a wild pitch, making the score 2-1. Larson hit RBI-singles in both the third and the fourth innings for Lawrence, but Illinois College added three runs over the same stretch to make the score 5-3. Urich RBI-double in the seventh, but it would not be enough as the Lady Vikes lost the game 7-4.

The team played a lot of softball this past week to finish up their season and Larson said, “It made for a pretty crazy week, but it was great to spend so much time with the team. We were all pretty stressed about fitting in all of our games while preparing for midterms, so we kept a pretty good balance between studying and comedic relief, which made it much easier to get through.” In order to handle all of it, Larson said, “I’m a really superstitious person, so I am a big on making sure we do things to keep the good juju. Before every game I put a temporary tattoo on each forearm and for these last few games a few of us put on eye-black. We also had our inflatable rally parrots, Polly and Patricia, and our juju statue, Little Stitious, to give us the extra push when we needed the rally.”

Lawrence ended with an overall record of 11-23 and a conference record of 5-13. The team is only graduating one senior so the future is bright, and they have big goals as Larson added, “While we didn’t get as many wins as we had hoped, we improved a lot as the season went on and left a great foundation to build off of for next year. The biggest goal we have for next season is to earn a bid to the Midwest Conference Tournament, and I think that is a really achievable goal. We played a lot of really good games this season that just didn’t go our way, so if we continue working hard and being relentless we’ll win those games next year.”