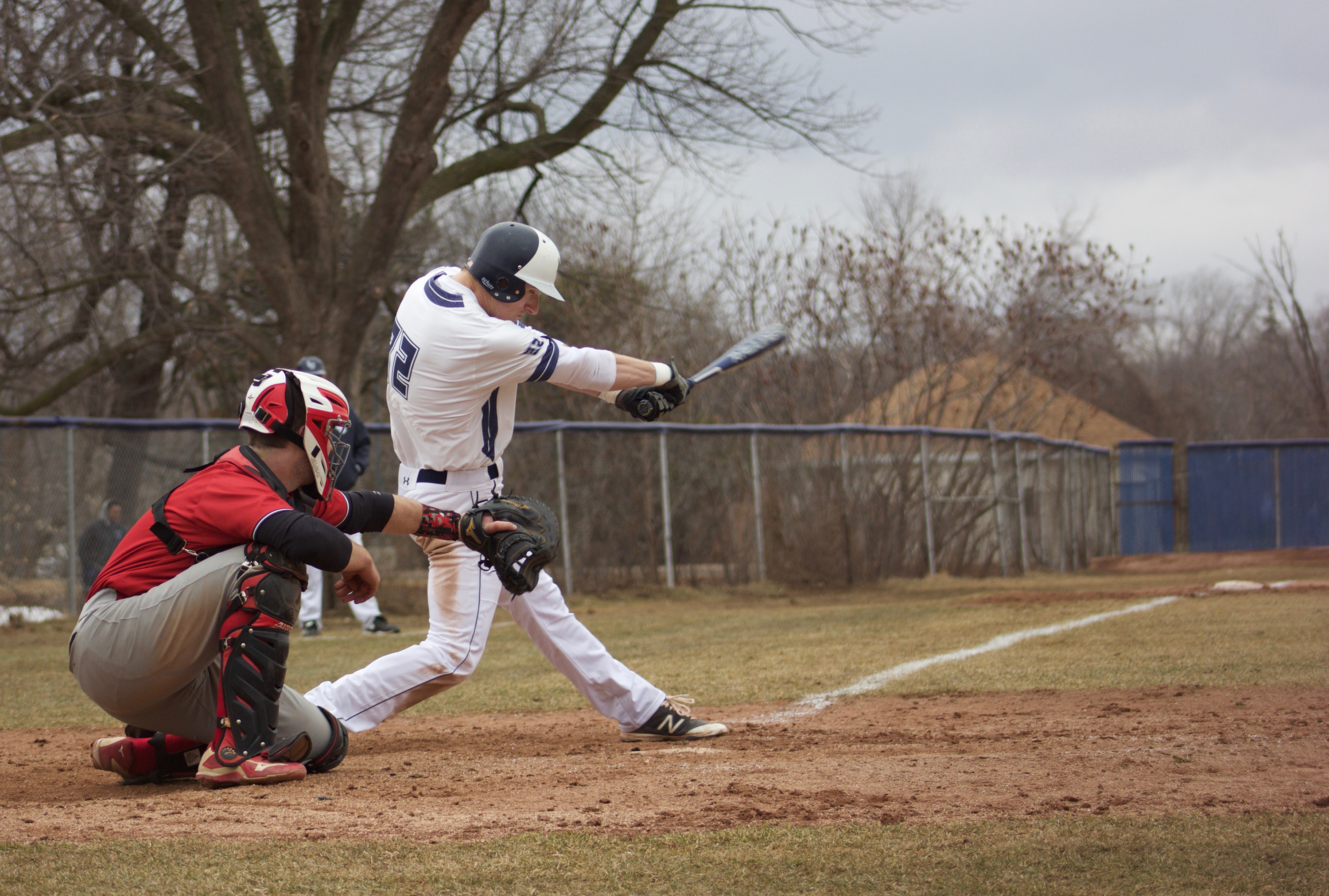 What a weekend it was. For the first time since 1990, our Lawrence Vikings baseball team is headed to the Midwest Conference tournament. The regular season officially ended after the boys completely swept Beloit this past Saturday and Sunday.

With the stands packed with students and family, the Vikings played their last two home games of the season on Saturday, May 5. The energy was absolutely exhilarating. Coming into this weekend, the Vikings had to win three out of the four games against Beloit. No one was expecting to see Lawrence listed for the tournament, but the guys pulled together and stuck it to them. The fans knew what needed to be done and did their part from the stands with constant cheering, hooting and hollering and positive vibes. But we all know that isn’t what wins baseball games.

In the first game, Beloit got a jump start and led Lawrence 5-1 going into the fifth. That inning was ignited by junior Andrew Lauber’s double and junior Nolan Spencer’s single. Senior Zach Rabideau laid down a beautiful squeeze bunt to score a run, and senior Matthew Holliday hit a hard ground ball to second to chip away the lead, making it 5-3. Some good offense stacked up in the sixth to tie the game 5-5. The game stayed tied until the bottom of the ninth. You could feel the intensity in the crowd. The boys were about to pull off this win. Spencer’s single, followed by another bunt from Rabideau and a sharp single from Holliday to score Spencer gave the Vikings a walk-off win, Holliday’s second of the season.This solid offense coupled with a strong outing on the mound by junior Chris Shaw and sophomore Mike Brady’s couple-inning save made for one of the most exciting games of the season.

The second game went similarly, but the Vikings came out strong. Senior Travis Weber got the ball rolling with a solo homer in the second inning. Beloit scored in the third and sixth, taking a 2-1 lead. Brady hit a solid single gaper to even out the score in the seventh, and Lauber drove him in with a single of his own. Holliday drove a ball up the right field line for a single and sophomore Rudy Mueller-Schrader scored him. Senior Anthony Ortiz came in with a two-run single, putting the Vikings ahead 5-2.

Mike Brady came in, once again to relieve, in the ninth, and came through with his third save of the season. Senior Kyle Duex went for eight strong innings to pick up the win, allowing ten hits and striking out a career high of 11 batters, and walking only two.

Needless to say, these boys were feeling the high energy. Andrew Lauber attributes their success to “the product of each and every guy doing their job, and doing it well.” He says, “It is vital that we work together to secure the win. Our sweep against Beloit this weekend is an example of what happens with our pitching and hitting work in unison.”

The Vikings travelled to Beloit on Sunday, May 6, determined to take another two from the Buccaneers, and clinch their spot in the MWC tournament. They did just that. The first game was a nail-biter, going an extra inning, but Lawrence came in with a huge comeback win. Trailing by three runs going into the ninth inning, they managed to string together some hits and tie the game.

In the tenth, Rabideau reached on a throwing error while attempting to bunt, and then Holliday followed with a clutch single to advance Rabideau to third. Sophomore Patrick McDonnell followed with a sacrifice fly, scoring Rabideau. This put the Vikings ahead 5-4. Holliday allowed a single, but finished strong to end the game in an extra inning win. This win sealed their spot in the MWC Tournament, but the boys were not done. They came into the second game of the day and took that game 3-2. Solid pitching, big defensive plays, and just enough offense put the Vikings on top to complete the full sweep for the weekend.

“Our pitchers worked tirelessly to keep their hitters at bay while the hitters battled pitch-by-pitch to put the pressure on Beloit’s defense,” says Lauber. The guys worked hard and “this weekend was a testament [their] ability to work together toward a common goal.” Lauber believes this mentality will serve them well as they go into the playoffs starting this Friday, May 10 at 10 a.m. at St. Norbert College against the south’s first seed team, the Monmouth Fighting Scots.

The team is obviously pretty excited about making the tournament, especially given that it hasn’t happened in their sport since 1990. This excitement, however, does not distract from the level they want to get to. Almost immediately, the guys were looking up stats on their possible opponents and getting ready for their next competition, says Lauber. “Very few expected Lawrence to be contending this year and we are poised to make the most of our opportunity and to represent our school with pride,” Lauber says.

The Midwest Conference tournament begins Friday at St. Norbert’s College. Keep making noise at the tournament. Your school is behind you, supporting you the entire way. Go Vikings!