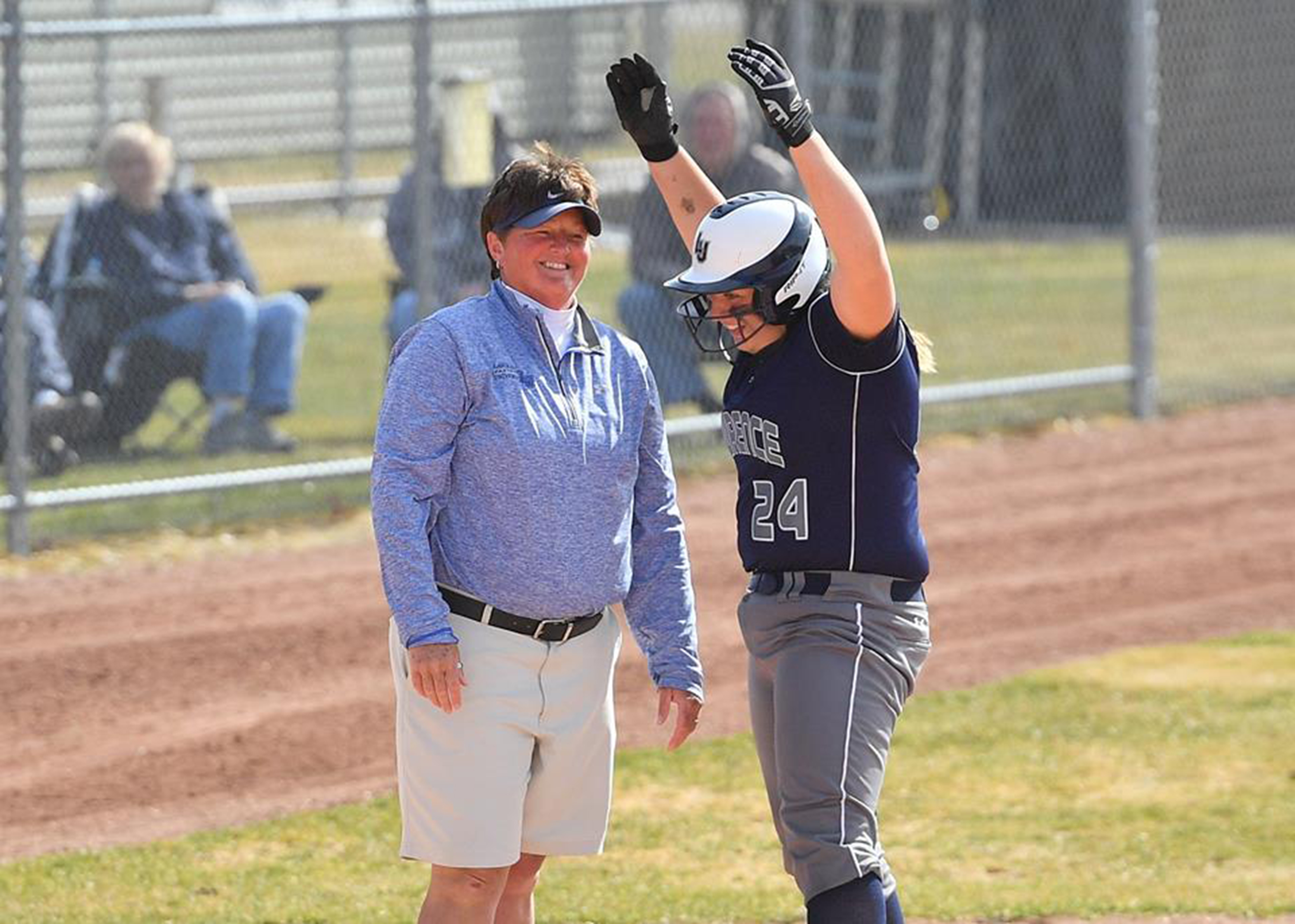 On Thursday, April 26, Lawrence University head softball coach Kim Tatro passed a coaching milestone: the Lady Vikes’ win over Knox was Tatro’s 500th victory as a coach at Lawrence. Tatro, who has been coaching at Lawrence for 25 years, has 91 volleyball wins in addition to her 410 softball victories to date. Tatro, though humble about all her success, has the most coaching wins in Lawrence history.

Tatro, who was a three-sport athlete in college, was quick to get into coaching after finishing up her own undergraduate career. “I had a passion for sport and really couldn’t imagine not being involved in some aspect of sport. After completing my undergraduate, I spent one year as a graduate assistant at UW-Green Bay coaching volleyball and softball. I accepted a sales position a year later, but really missed being involved in athletics, so I pursued an opportunity to coach varsity volleyball and softball at Green Bay East high school. I was fortunate to learn from some excellent coaches in both high school and college. When I got a call about the Lawrence position, I knew it was something I had to explore, and here I am 25 years later. It’s amazing to be able build a career doing something you love.”

Tatro’s focus as a coach goes far beyond athletics, reaching into every aspect of her student athletes’ lives. When asked about her personal coaching philosophy, Tatro responded, “We like to take a balanced approach when thinking about sport. It’s really great to be competitive, but not at all costs. The sports that I have coached have always been team sports (as opposed to individual sports) so relationships are critical to success. Honestly, there has to be an element of fun for all involved. We have attempted to create an environment where being competitive is important but not at the expense of being too stressed out to perform. It can be a delicate balance. It’s important that we take a holistic approach to the development of our players as people and future leaders. As a result, our team is involved in plenty of other campus organizations and we are active in community service efforts. It’s really about taking quality people and working together to have them reach their full potential.”

In terms of her success, Tatro credits not herself, but those around her, saying, “It’s all about the people around you. Any success we have is a result of the people we surround ourselves with. We all (including our staff) strive to grow and learn from each other. If you think you’re done learning, you’re wrong and missing out on an excellent opportunity. I’ve been fortunate to learn from some excellent coaches, administrators and athletes in our program over the years.”

Tatro’s influence goes beyond just the athletes she coaches on the softball team. She is an integral part of the Lawrence community and beyond as she involved many different campus and national committees and initiatives. It is not uncommon for student athletes to see Tatro walking the halls of Alexander Gymnasium as she goes about her day.

Junior Madeline MacLean, a pitcher on the softball team, describes Tatro as “a highly determined, caring and hardworking individual.” MacLean goes on to say, “I knew from the moment we made contact during my recruiting season in high school that she would be one of the best coaches I’d ever ever had. She goes above and beyond to make sure that her players are taken care of and that they know they have a support system behind them. When I left campus after I was recruited, she immediately messaged me to make sure I let her know when I landed back home and that she would be in contact again soon. It was obvious that she genuinely cared about me and my well-being. It was actually one of the deciding factors for my college choice. From then on, she has continued to prove my original opinions. I walked into practice on my first day, and there was a certain intensity that drove everyone’s effort in practice. We work on fundamentals as well as the complicated plays. She breaks things down, recognizing that the majority of Lawrence students need to know the whys and hows of their actions. She welcomes questions, but pushes us to figure things out on our own. Tatro is constantly working on ways to help make the game “easier” for us by compiling statistics, having many conversations on strategy and giving us the confidence we need to go out on the field and play to our best potential. Tatro is the perfect example of a coach that knows how to balance their athletes’ well-being and the need to push them to be better. I have the utmost confidence that I can approach her with anything ranging from life’s problems, team concerns, strategies I have and anything in between. I couldn’t have asked for a better head coach and she deserves the recognition accompanied with her 500th win.”

Coach Tatro, in her all of her success, truly embodies the spirit of Lawrence athletics as she pushes her student athletes to their best in athletic competition, academic pursuits and community involvement. Congratulations Coach Tatro on your 500th win and thank you for all you do for Lawrence athletics and Lawrence University.